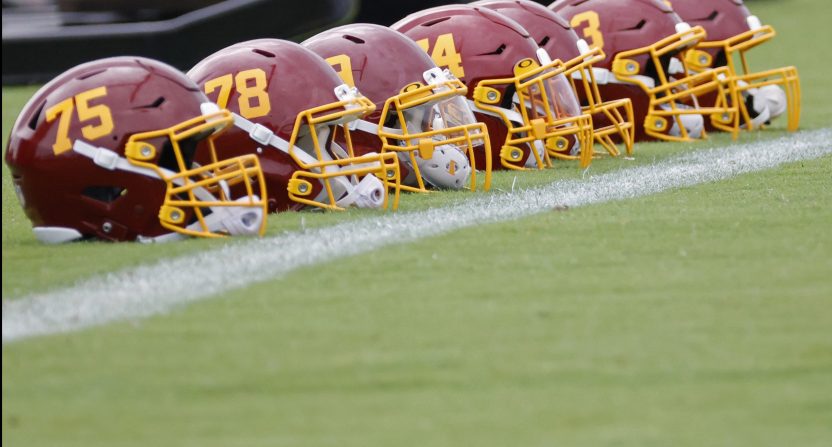 Not only was it leaked by franchise legend and current broadcaster, Joe Theismann, but helicopter pilot Brad Freitas of NBC4 in DC spotted “Commanders” on the walls of Washington’s team store while flying above it.

There have been some clever takes.

Washington Commies, might as well call their fanbase the Red Scare now https://t.co/nbpExjymn6

Others have been more positive.

Like it. Liked Armada or Admirals better but 🤷‍♂️ https://t.co/8equdhm378

No way! The Commanders? Not bad. https://t.co/RyRrawkXb4

The positive takes seem to the minority — at least on Twitter.

Plenty of people are just not feeling the new name. As if to say, WTF, WFT?

Still better than Redskins but not as quite up to the level of Washington Football Team. https://t.co/VaLmuFqNC6

Imagine having Red Hogs sitting right in front of you and going with this junk smdh https://t.co/uvwFOKScnU

This #WashingtonFootball name reveal will be the most anticlimactic event since the opening of Capone’s vault. https://t.co/iEubjLngRU

There were other questions. A big one was, how was this so easy to spot less than 24 hours before the big reveal?

They didn't tarp the windows…. https://t.co/898SzXoHFu

If they truly wanted to keep a tight lid on this thing until tomorrow, how effin’ hard would it be for the employees to put up the sign and stock the shelves at 6 a.m? Or say the store opens 1 day later? Or at 6 pm. I mean, there’s not gonna be some kind of rush on it. https://t.co/alTCrjwDaN

The Washington Football Team concealed their workplace discrimination better than keeping their new name and logo a secret https://t.co/eI3GBqbXcd

It’s even been suggested that this may be done as a diversion tactic.

Imagine this is a breakaway wall with the real name hidden behind it. Ultimate swerve. #WashingtonFootball https://t.co/2EdnJrMOsg

They have got to be doing this intentionally to screw with everyone, right? #WashingtonFootball https://t.co/wRjqHGsx3u

There’s one other pressing question on the mind of some people. Regardless of what anyone feels about Commanders, it really took two years to come up with the name?

Y’all made those fans wait 2 years to be called the Washington Commanders?

2 full years to come up with a name and chose Commanders lolol https://t.co/W6iyg8dcj9

Even that’s a misrepresentation. It’s been two years since the decision to move away from the Redskins. But this controversy has been going on for decades. The idea that nobody in the organization thought of possible new names until two years ago is laughable.

And to be fair, there’s almost no nickname that wasn’t going to generate an “it took you two years to come up with that?” response.

This leak does beg the question that we’ve already addressed. Is this possibly just one elaborate ruse being pulled off by Dan Snyder and company? Maybe, on Feb. 2, a different team name will be revealed and it will blow all of our collective socks off.

Anything is possible, of course. But that kind of sneakiness would require some sharp work from the Washington front office. And since Snyder took the reigns of this franchise, it hasn’t been known for being that adept at well, anything.