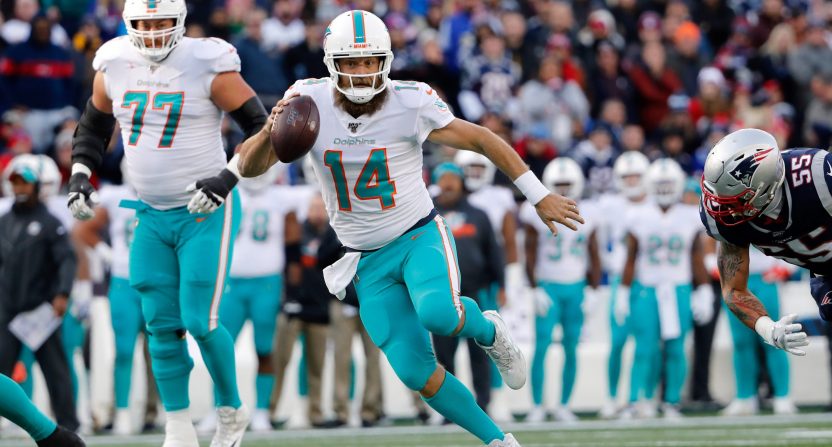 Get ready for what could be the weirdest season in the AFC East. We live in a world where the best quarterback in that division could be Ryan Fitzpatrick. Seriously. This is not clickbait. This is a distinct possibility. Tom Brady’s departure from New England, to go with the rest of the AFC East’s routine incompetence, makes this something that might happen.

Fitzpatrick is the most experienced and accomplished quarterback in that division. He has started 139 games – 93 for AFC East teams (the Buffalo Bills, New York Jets, and Miami Dolphins). Nobody else within the division comes close. Yes, the Dolphins drafted Tua Tagovailoa to be their quarterback of the future. But considering the unknowns surrounding his hip injury, Tagovailoa might not be Miami’s quarterback of the present.

Look at the rest of the AFC East quarterbacks. Buffalo’s Josh Allen has all the physical gifts, but his lack of accuracy has been well-documented. The post-Brady Patriots are the biggest question mark at quarterback, with either mystery man Jarrett Stidham or journeyman Brian Hoyer as the starter. The Jets still don’t know what to make of Sam Darnold.

What had been the most predictable division is now muddled in uncertainty. Usually you could count on New England winning. And the Patriots still might. Bill Belichick has already proven he can win games with the likes of Matt Cassel, Jimmy Garoppolo, and Jacoby Brissett.

But the best AFC East QB might be Fitzmagic.

Fitzpatrick has already exceeded expectations. He was a seventh-round draft choice by the St. Louis Rams in 2005 out of Harvard. Seventh-round picks usually don’t make rosters, especially ones from the Ivy League. Yet, Fitzpatrick has cobbled together a 15-year career. He is one of only nine active players left from his draft class. He has lasted this long by being smart, fearless, and adaptable.

Fitzpatrick was never good enough to be a reliable long-term solution. (There’s a reason why he has played for eight different teams – three over the past four seasons.) But he can be an ideal short-term solution/backup. In a pinch, he can run any offense and be extremely productive for a few games.

So why does a guy like keeping bouncing around? Fitzpatrick is often fearless to the point of recklessness. He routinely overestimates his ability and that leads to turnovers. It has plagued him throughout his career. But with Miami last season, he wasn’t as error-prone. His interception rate was only 2.6 percent, tied for his second-lowest in a season. And when Fitzpatrick has a clean pocket, he can be terrific. Pro Football Focus graded him as the NFL’s third-best passer when not pressured – ahead of Patrick Mahomes – over the past two seasons.

Last year, Fitzpatrick delivered one of the biggest upsets in decades when the Dolphins, a 16-point underdog, defeated New England 27-24. This victory cost the Patriots a first-round playoff bye and effectively helped end the Brady-Belichick dynasty.

Miami ended the season on a high note, winning three of its final five games. This team overachieved. Management’s plan going into the year was to Tank for Tua. Well, the Dolphins got Tagovailoa anyway while rebuilding. Will we see Tagovailoa on the field this fall?

Assuming there’s a 2020 season, Miami has options. The coronavirus has prevented team doctors from making a thorough assessment of Tagovailoa’s health. If he’s less than 100 percent by September, it may make sense to “redshirt” him so he can fully recover. But even if he’s medically cleared, perhaps Miami will start the season with the rookie on the bench and slowly working him into the lineup by the end of the year.

Fitzpatrick said he will be Tagovailoa’s “biggest cheerleader.” But he also wants to start.

“I’m going to do the best I can to help him to make sure our position is doing the things to make our team win,” he said. “That’s my mentality. That’s how I think about it. You know me very well from last year, and you know I want to be out there competing.”

Miami spent a lot of money this offseason ($123.5 in guaranteed money to free agents). They’re building to win in 2020. The quarterback who gives them the best chance to do so is Fitzpatrick.

Fitzpatrick isn’t great, but he might be good enough for the AFC East. If he gets the Dolphins to the playoffs, that would be some true Fitzmagic.