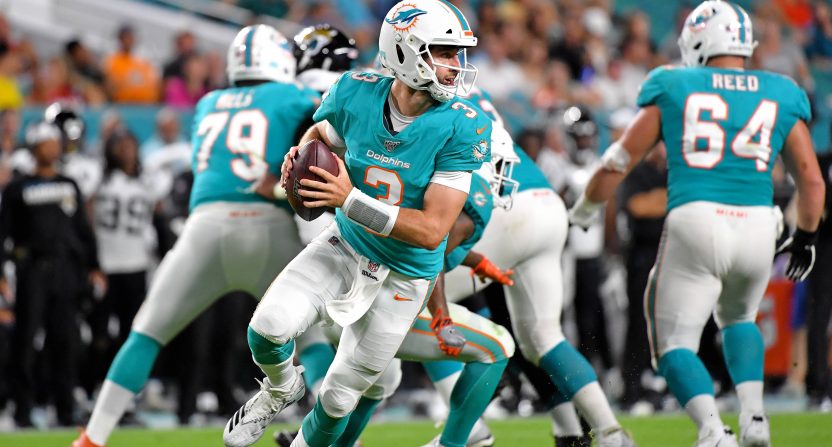 There are eight NFL teams that are currently projected to win fewer than seven games, per Action Network. While a couple of these teams will likely outperform their expectations, most of them can reasonably be placed in some form of a rebuilding stage. Their quarterback situations may be in flux, they may be introducing a new coach, or they might simply be in need of a teardown.

Given the increasing number of quarterbacks taken in the first round of the NFL Draft the last couple of years, fewer and fewer organizations outright lack a QB. That means many of the bottom tier teams have far-fetched aspirations of making the playoffs.

No matter the roster-building stage, let’s take a look at those eight bottom teams and their respective situations, both in the present and for the future:

As one of a handful of Patriots outposts across the NFL, the Lions are hoping that former Pats coordinator Matt Patricia can mine the best out of this Detroit team. Patricia’s first season as head coach didn’t inspire a huge amount of confidence.

Matthew Stafford has faced questions of his feasibility as a difference-making NFL starter. He had a noticeably down year last season, finishing with his fewest adjusted yards per attempt since he was a rookie. Injuries may have inhibited him. He’ll need to be fully healthy this season for the Lions to have a chance in a brutal division.

Detroit will have talented players at a few positions, particularly in the front seven, where Damon Harrison will anchor the defensive line and Trey Flowers will rush the passer. They will have to improve a defense that ranked 27th in Football Outsiders’ DVOA last year. A step forward from the pass defense, which features star corner Darius Slay, is crucial. That will be Patricia’s job — it’s what he was brought to Detroit to do. They’re still a few steps away from true contention.

6.5 seems high for a Bucs team that went 5-11 last year and haven’t dramatically improved, but the Bruce Arians effect might be very real. Arians is a good coach and could plausibly boost the Bucs by a few wins, though that’s going to be difficult with Jameis Winston plateauing at QB. Winston doesn’t seem anything more than, at best, a straight-ahead average QB. Bucs fans already navigated the profoundly average Josh Freeman years at the beginning of the decade. They don’t need another Freeman.

With Mike Evans, a competent O-line, and Arians’s coaching, Winston will be in a generally favorable situation. Running back seems to be the weak point; Peyton Barber was mostly ineffective in his rookie season, and will likely receive the majority of carries again.

The defense, one of the league’s worst last year, isn’t likely to take a big step forward despite the arrival of free agent Ndamukong Suh. Fifth-overall draft pick Devin White will be fascinating to watch at linebacker.

Arians is 67 and had previously stepped down from his Cardinals job in part due to health reasons. His timeline with the Bucs won’t be long. They need a quick decision on whether or not Winston is the QB of the future.

As ever, dysfunction is the story in D.C. Star tackle Trent Williams wants out and the team doesn’t want to get rid of him, so it’s an open question as to whether he will actually report. The secondary will be a weakness despite the arrival of star safety Landon Collins, whom Washington shelled out for in the offseason. Colt McCoy, who in theory was going to compete with Case Keenum and Dwayne Haskins for the QB job, has been held back by leg problems after the team inexplicably rushed him back from injury last season.

Keenum appears to have won the job. Haskins somehow fell to 15th in the draft and should be the QB of the future. He’ll have a pair of interesting running backs (Adrian Peterson and Derrius Guice) and a less promising cast of receivers, featuring Josh Doctson and Paul Richardson.

The biggest story for Washington is Haskins’s development. A rough season could put coach Jay Gruden’s job in jeopardy.

Cincinnati are on the top of the “need a QB” list, with the Andy Dalton days likely numbered. Given how much help Dalton needs to succeed, it’s hard to see how Zac Taylor and Co. can afford to push forward with Dalton as the signal-caller.

The defense is aging, particularly the Geno Atkins-Carlos Dunlap pass rushing duo. The Bengals finished tied for second-to-last in weighted defensive DVOA last year. Offensively, they’ll have skill position weapons in AJ Green, Tyler Boyd and Joe Mixon, but Green will miss games with an injury and the o-line will be low-caliber.

Taylor, he of the “associated with Sean McVay” breed of NFL head coaches, is 36 and has not reached any position above interim offensive coordinator at the professional level. He is unproven, and the Bengals took a risk by hiring him to replace Marvin Lewis, who is somehow not the Bengals coach anymore. Cincy need to see signs that Taylor is legit this season, and they really should start the process of moving on from Dalton.

It’s a bit early to declare Daniel Jones the savior of the franchise, but the Giants can be happy with their rookie QB’s above-average preseason performance, which at the very least will raise his confidence. Head coach Pat Shurmur is defiant, already trying to throw Jones’s (very inconclusive) preseason back in the faces of those who doubted the Giants’ taking the Duke QB so high in the draft.

Eli Manning seems likely to start ahead of Jones, at least to start the season, meaning New York have little hope of doing much of consequence. At some point Jones will have to become the starter. It’s not like they’ll be too busy winning to get their rookie some game time.

Jones won’t have many receivers to throw to, though he will have Saquon Barkley coming out of the backfield. With Landon Collins off to Washington, the defensive backfield could take a step back. The front office has some work to do over the next two or three years, and I’m not sure they’ve inspired much confidence that they will do a competent job.

Year 2 of Jon Gruden should be more telling than Year 1. Antonio Brown is there now. Whatever bizarre situations AB has put himself in this offseason, he is still the league’s best wideout, and will help Derek Carr considerably. To round out the offense, rookie weapons Hunter Renfrow and Josh Jacobs will have to step up. Brown will get constant double and triple teams if Renfrow and Tyrell Williams don’t prove capable as pass-catchers.

Oakland’s biggest weakness is its pass rush, which was the worst in the league last year. After trading Khalil Mack, they finished last in the NFL with just 13 sacks. The Patriots and Giants were second-to-last with 30.

Fourth-overall pick Clelin Ferrell, a reach that high in the draft, will be trusted to help at defensive end. The Raiders cut outside linebacker Brandon Marshall at the end of training camp, despite Marshall being listed as a starter on the depth chart up until his release. Former undrafted free agent Nicholas Morrow is listed behind Marshall at weak-side linebacker on the team website.

The secondary has a couple of intriguing young pieces, including rookie first-rounder Jonathan Abram. As a Gruden believer, I have confidence that the Raiders will improve this season. The pass rush will hold them back.

The Cardinals aren’t great in most areas of the field, and will probably lose most of their games. With Patrick Peterson suspended for the first six games, teams are going to slice up the defensive backfield. The offensive line could at least marginally improve, with Justin Pugh back healthy and former Steelers’ right tackle Marcus Gilbert arriving via trade. Murray’s (and Kingsbury’s) development is the story for an Arizona team in transition.

Miami are tanking, as much as any NFL team can possibly be tanking. They clearly don’t have much interest in winning this season, and given the state of their roster (and the state of the 2020 QB draft class), that is probably the right approach. The Dolphins jettisoned multiple veterans, including Cameron Wake and Robert Quinn.

But Miami don’t seem to know what they’re trying to do this season. They were reported to be going after now-traded Texans’ linebacker Jadeveon Clowney, a move that would have made little sense at this early stage of the Dolphins’ rebuild. They did manage to fetch significant draft capital from the hapless Texans, dealing star young tackle Laremy Tunsil and receiver Kenny Stills for a collection of picks and players.

Josh Rosen is competing with Ryan Fitzpatrick for the starting QB job. New coach Brian Flores — another Patriots Lite hire — shouldn’t have made it a competition. Start Rosen! Miami isn’t winning games this year. They could see if they can create some Fitzmagic, but there would be little long-term benefit in that. See what you have in Rosen.

Stay the course, and they could gradually build something. NFL teams, particularly NFL coaches, who are constantly coaching for their jobs, have no patience. Miami have to proceed with a certain amount of foresight.