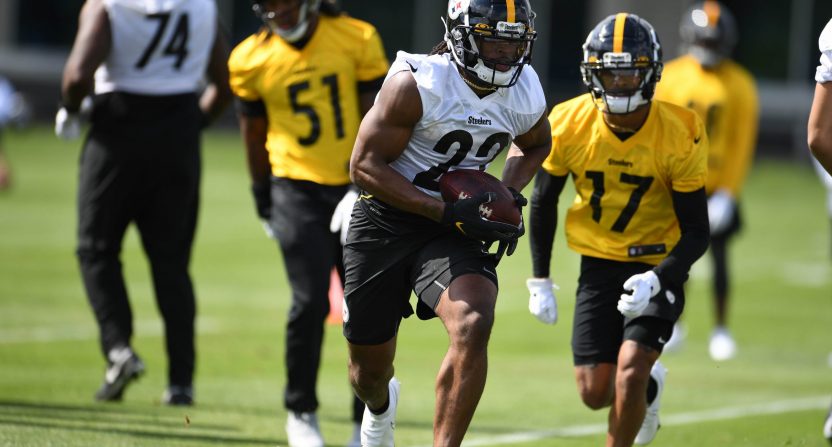 Quarterbacks are always under pressure to perform. But what about the rookies who aren’t quarterbacks? Here are the top five who need to have big seasons in their first year:

Justin Herbert just completed the greatest rookie season we’ve ever seen from a quarterback. What made it even more impressive? The 2020 Offensive Rookie of the Year did so despite operating behind the NFL’s worst offensive line, according to Pro Football Focus. Herbert was the best quarterback under pressure, with 13 touchdowns, three interceptions, and a league-high passer rating of 96.4. That kind of production is highly unusual for a rookie and can be hard to replicate.

The Chargers overhauled their offensive line to protect their prized young quarterback. Slater should help keep Herbert upright and healthy. He didn’t allow a sack in 2019, his final season at Northwestern before opting out of 2020. That season included a matchup against Ohio State defensive end and 2020 Defensive Rookie of the Year Chase Young. How rusty will he be? We could find out soon. The Chargers’ season-opener is against Young’s Washington Football Team.

The Cincinnati Bengals could’ve played it safe by drafting Penei Sewell, considered the best offensive lineman prospect in recent memory. The Bengals allowed 48 sacks (tied for fifth-most in the league), and Pro Football Focus ranked their offensive line third worst. Joe Burrow, the top overall pick in the 2020 draft, sustained a season-ending injury in November due in part to poor protection.

If Sewell becomes a star for the Detroit Lions — who took him two picks later — and Chase doesn’t, the Bengals will never hear the end of it.

Chase is a former college teammate of Burrow. The last time the two were together, LSU won a national championship, Burrow won the Heisman Trophy, and Chase had one of the greatest seasons by a wide receiver in college history. In 2019, he led the FBS in receiving yards (1,780) and set an SEC record with 20 touchdown receptions.

When you’re picked by America’s Team, there are high expectations. Dallas was fourth-worst in the NFL in points allowed (29.6) and second-worst in rushing yards allowed (158.8). So, the Cowboys used eight of their 11 draft picks on revamping the defense for new coordinator and ex-Atlanta Falcons coach Dan Quinn.

Parsons was the third defensive player selected in the draft. The Cowboys were desperate for a cornerback, but after the Carolina Panthers and Denver Broncos took Jaycee Horn and Patrick Surtain II back-to-back, Dallas traded down with the Philadelphia Eagles and picked Parsons. Most teams would rather have defensive line or secondary help. However, linebacker can be an impact position. Dallas hopes Parsons develops into an every-down menace who can rush the passer and create turnovers.

Perhaps Quinn can use him the same way he used Seattle Seahawks linebacker Bobby Wagner. Quinn was the defensive coordinator when Seattle won the Super Bowl after the 2013 season.

Rashod Bateman was the fifth wide receiver taken in the draft. But no team needs its rookie wideout to make an impact more than Baltimore.

Last season’s narrative about Lamar Jackson’s regression doesn’t tell the full story. In fact, when you look at the Ravens wide receivers over the past few years, it makes Jackson’s’s 2019 MVP season that much more remarkable. Baltimore wide receivers finished dead last in receiving yards in 2019 AND 2020. If Marquise “Hollywood” Brown is your best wideout, that’s not good enough.

Baltimore is determined to upgrade. The Ravens signed veteran Sammy Watkins, but at this stage of his career, he’s probably a third option. For the Ravens to take the next step, Bateman has to be elite. That’s asking a lot. True, last year the Vikings’ Justin Jefferson enjoyed the greatest pass-catching rookie season in NFL history. However, he had the luxury of playing opposite of Adam Thielen.

So far, Bateman looks up to the task. Ravens coach John Harbaugh is impressed.

Over the past three years, only four running backs have been taken in the first round. Teams are reluctant to invest high picks on such a disposable position. However, when one is selected, he’s virtually guaranteed to play early and often.

Harris should start from Week 1 and will be under the gun because the Steelers don’t have other desirable options. Their top returning rusher is Benny Snell Jr., who averaged 3.3 yards a carry. Pittsburgh’s running game was the worst in the league (84.4 yards per game), primarily because of its declining offensive line. But a premier running back can compensate for lackluster blocking, and Harris has to produce for the Steelers to win the AFC North.

Harris has the type of versatility the franchise has missed since Le’Veon Bell left after the 2017 season. At Alabama, he rushed for 1,466 yards, caught 43 passes, and scored 30 touchdowns his senior year. Harris will be extremely important to preserving the fossilizing remains of Ben Roethlisberger, who threw 10 interceptions over his final seven games of 2020.