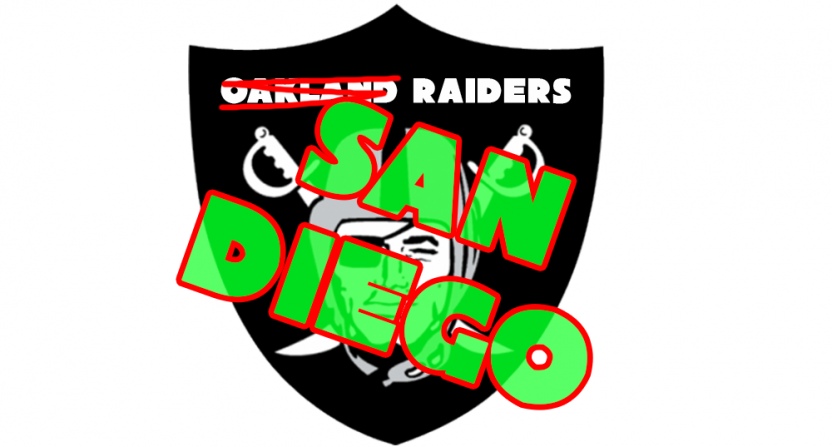 A lot of people know that the NFL’s Oakland Raiders will soon become the Las Vegas Raiders. What they might not be aware of is the craziness that’s happening in between.

Back in 2017, it became public that the Raiders were in default on their Coliseum lease. With the news that the franchise would be bailing on Oakland for comfier confines in Nevada, the Oakland-Alameda County Authority board was not about to let the hundreds of thousands of dollars owed slide. So, they threatened to kick the Raiders out of the stadium before the 2018 season if they didn’t make good. They were eventually about to work out a handshake deal for the franchise to keep playing the Coliseum through at least this season and probably next season before they arrive in Vegas in 2020.

However, in September, the city of Oakland moved forward with plans to file a multimillion-dollar antitrust lawsuit against the Raiders and the NFL. News of the impending lawsuit put the brakes on that two-year extension and the Raiders threatened to just leave Oakland after this season if it went forward. Well, that lawsuit was filed this week and now the ball is back in the Raiders’ court. The city has called their bluff, so now what?

High ranking Raiders official said today there is “no way” the team plays in Oakland in the 2019 season after the city filed suit today. Source said there are 5 or 6 cities the team will consider, including some that already have NFL teams.

Owner Mark Davis could just suck it up and stay in Oakland until 2020, but he’ll effectively be paying rent that will then be used to fund the lawsuit against him. If we know anything about the Davis family, it’s that they don’t like to get pushed around and are willing to make bold decisions about it.

The most logical choice on paper is actually the first option off the table. The Raiders can’t just play wherever they want, they need the NFL to sign off on any stadium they play in. And according to the Las Vegas Review-Journal, Vegas is out because Sam Boyd Stadium doesn’t meet the league’s standards. The team will just have to wait for their state-of-the-art stadium currently under development.

The other logical idea would be for the Raiders to just suck it up and play in the San Francisco 49ers’ stadium out in Santa Clara for a year. However, all signs point to Mark Davis absolutely being dead-set against this. Still, 49ers CEO Jed York has said in the past that he would be open to sharing the space with them if they wanted. Don’t bet on it, however.

This one might end up being the logical destination of all for multiple reasons. No. 1, San Diego’s got an NFL-ready stadium just sitting there collecting dust (at least until the AAF’s San Diego Fleet show up). No. 2, the Raiders already have a strong fan base in Southern California from their years in Los Angeles. No. 3, why go play somewhere far away when you can keep costs (relatively) low by shipping your things down to San Diego and then on to Vegas. Of course, it means the good people of San Diego will lose their second NFL franchise in four years, but ’tis better to have loved football and lost than to have never loved football at all.

Phoenix is apparently in play and there’s some logic to that. It’s an NFL city already so the Raiders would just be splitting time with the Cardinals (which is silly because they could just do the same in Santa Clara, but, whatever). The most enticing part of it would be playing in the same time zone as Las Vegas, which is a five-hour car ride away. Some truly dedicated Raiders fans could get a jump start on their appreciation for the team by heading south for home games a couple times in 2019. Would the Cardinals want to deal with the Raiders and their fans? Remains to be seen.

Portland has also been bandied about as a potential short-term home for the Raiders. The team would presumably play in Autzen Stadium in Eugene as the biggest stadium in the city is way too small (Providence Park only holds 20K). It’s not entirely clear how this would work and/or be a better option than San Diego. Oregon would love to show off how much they can support an NFL team but it just feels like a bad idea.

Again, there’s something hilarious about the idea that the Raiders would consider splitting a stadium with the Seahawks instead of just doing it with the Niners, but that’s apparently on the table. Would a fanbase who grew up hating the Raiders turn around and support the team just because they’re playing in their team’s stadium? And what a bother for fans in Oakland to travel up there each weekend for games. It’s just the kind of strange move that Mark Davis might make, but it remains unclear if the Seahawks would even want to deal with all that.

The wild card in this process is apparently San Antonio. The Texas city has been thirsty for an NFL team for years. They almost got their hands on the Saints some years ago and now they’d love to show the Raiders a good time, even for a year. While a Raiders official told Jason Cole that San Antonio was in play, Davis put the kibosh on this when he said he doesn’t like the turf there. Of course, that could be a signal to the stadium to replace that turf, at which point perhaps it becomes more appealing to the team.

The San Antonio Raiders sounds so silly we just might want it to happen, but in the meantime, we’ll put our money on the San Diego Raiders (unless the team figures it out with Oakland, which they probably will).

1 thought on “Which city makes the most sense for the Raiders in 2019 if they leave Oakland early?”