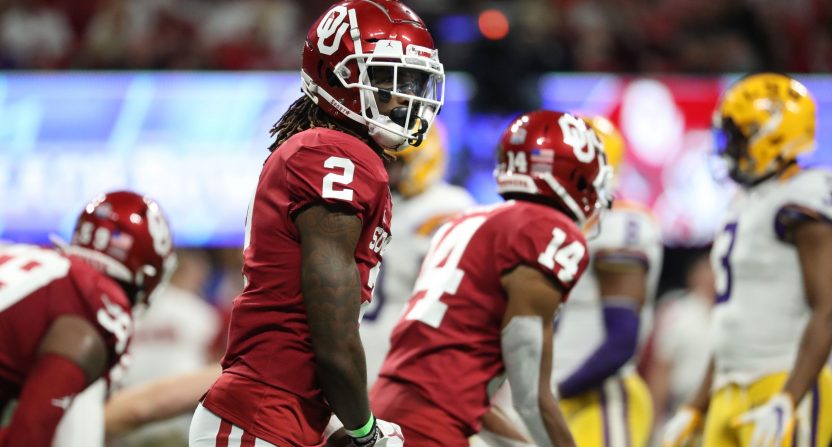 It’s hard to project the immediate impact of any NFL first-round draft choice. Statistically and historically, the success rate of No. 1 picks is a coin-flip.

Last year, two wide receivers were taken in the first round: Marquise Brown (No. 25 to the Baltimore Ravens) and N’Keal Harry (No. 32 to the New England Patriots). Brown looks like an emerging star, while Harry was a non-factor in 2019. The two best rookie wideouts turned out to be the Washington Redskins’ Terry McLaurin, a third-rounder, and the Tennessee Titans’ A.J. Brown, a second-rounder.

The following list isn’t necessarily ranking the best first-round receivers for 2020. Just a look at who’s in the best position to succeed.

The Eagles’ wide receivers were terrible in 2019. How bad? Carson Wentz became the first quarterback to pass for 4,000 yards without having a 500-yard receiver. Wentz relied heavily on tight ends Zach Ertz and Dallas Goedert, and running back Miles Sanders. So, here comes Jalen Reagor, a surprise choice over Justin Jefferson. Reagor is fast, but he also dropped a lot of passes. This should sound familiar. Former Eagles first-round pick Nelson Agholor also had problems catching the ball.

Philadelphia probably expects Reagor to eventually replace DeSean Jackson. But Jackson, even at the age of 34, might be the better player. He’s one of the best deep threats in league history, averaging 17.7 yards per catch – better than Randy Moss (15.5). If Reagor struggles early, Philadelphia fans will let him know.

ESPN draft analyst Todd McShay called Jerry Jeudy the best route runner he has ever scouted. Jeudy’s attention to detail could help him quickly adjust to the pro game. Plus, he’ll be working opposite Courtland Sutton, an emerging young star. And, yet Jeudy went behind his Alabama teammate Henry Ruggs. That should make you pause. Perhaps both wind up being Pro Bowlers, but you have to wonder if he’ll struggle against more physical cornerbacks.

Jeudy’s development could also be hindered by second-round quarterback Drew Lock. Denver made several offseason moves, including the additions of tailback Melvin Gordon and drafting Jeudy. But we still don’t know if Lock can play. Yes, he went 4-1 as a starter, but he also averaged 6.6 yards per pass. Lock will need to get the ball deep to his receivers on a consistent basis.

Henry Ruggs III was the first wide receiver selected in the draft. He’s considered the most explosive playmaker and one of the fastest athletes. He’s not necessarily as polished as Jeudy, but he might have a greater upside. Coach Jon Gruden desperately needs Ruggs to be a home run threat because the Raiders’ wide receivers last year were unremarkable. The biggest obstacle for Ruggs might be the man throwing the passes.

Derek Carr enjoyed his best season and you still wonder how good he is. According to Cian Fahey, Carr was the league’s most accurate passer last year, but as Fahey writes, “accuracy isn’t everything when it comes to being an NFL quarterback.” Carr was Captain Checkdown and didn’t get the ball outside the numbers much. Remember how Amani Cooper declined in Oakland? The moment he left for Dallas and hooked up with a better quarterback, his numbers rebounded. Will Carr take advantage of Ruggs’ speed?

What will help him? Offensive coordinator Gary Kubiak takes over after Kevin Stefanski left to become the Cleveland Browns coach. Kubiak has a great understanding of how to put players in the right positions to succeed. Jefferson was great working out of the slot for LSU, so expect to see plenty of that. Also, having a healthier Adam Thielen to draw defensive coverage away should ease Jefferson’s transition.

Kyle Shanahan is the best playcaller and designer of offense in the NFL. He could probably find a way to score 30 points with 11 octogenarians. Therefore, we’re extremely curious to see what he will do with the first first-round wide receiver he has drafted as a head coach. Last year, he took Deebo Samuel in the second round, and Samuel was one of the league’s top rookies. In 2017, Shanahan selected then-unknown George Kittle in the fifth round. Kittle is now an All-Pro and the NFL’s most productive tight end.

Brandon Aiyuk should have every chance to put up big numbers. Samuel had surgery last week after breaking his foot putting his status for the season opener in question. Assuming Aiyuk is healthy from core surgery, he might be the team’s best receiver in September. Shanahan said that the former Aiyuk was the team’s highest rated wide receiver on its draft board. The team traded up from No. 31 to acquire him.

No incoming first-rounder will be surrounded by more skill-position talent. Lamb, arguably the most talented receiver in the draft, joins a team that already has speedsters Amari Cooper and Michael Gallup. Lamb will replace the departed Randall Cobb in the slot. How will Lamb adjust to playing in that position full-time? That’s a legitimate question, but if Dallas is smart, they will move around this versatile weapon and not necessarily plug him into one spot.

Offensive coordinator Kellen Moore got the most out of Dak Prescott by building a system highlighting his skills. The result was a career year, as Prescott was one of the most accurate deep-ball passers in the league. His numbers would’ve been better for all those dropped passes.  Lamb gives the Cowboys another weapon who can stretch the field and create space. And with two established deep-threat playmakers, Lamb should get plenty of one-on-one opportunities. He could become the most exciting player on this list.