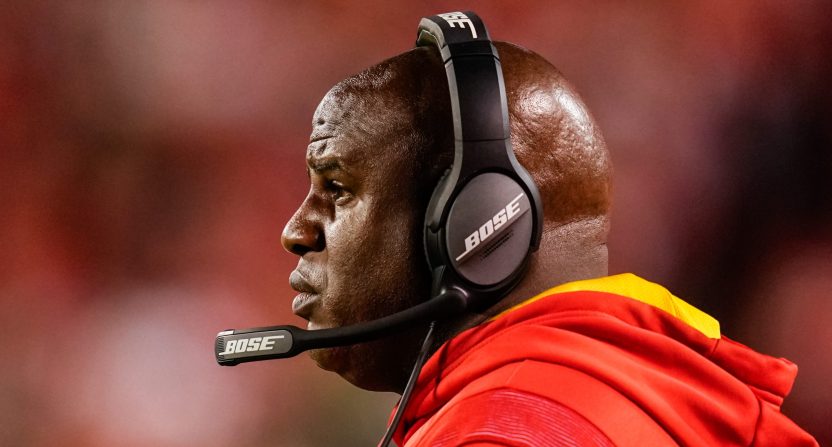 The Kansas City Chiefs are rolling. They’ve won the AFC West. If they win their final two regular-season games, they’ll clinch the No. 1 overall seed. That will give them a favorable path to their third straight Super Bowl trip.

The Chiefs are the envy of every other NFL team. Usually, competitors want to poach some of that brainpower. Hire the guys who work for a championship head coach. That’s the way it normally goes. And the Andy Reid coaching tree is impressive. Two of his former assistants have won Super Bowls (John Harbaugh and Doug Pederson), and a third went to a Super Bowl (Ron Rivera).

This all, of course, leads us to Eric Bieniemy, who’s long overdue for a head coaching gig. Will any owner finally give him a chance? Or will another year pass by without one of the league’s most qualified assistants not receiving a job offer? If Bieniemy is passed over yet again, that will be a colossal embarrassment to the NFL and a direct slap in the face to every African American assistant in a league that employs so many Black players.

Reid, a respected figure, has routinely lobbied for Bieniemy.

“I’m sure I’ll hear from people on that— Eric Bieniemy, Spags (defensive coordinator Steve Spagnuolo) has been a head coach and could easily jump in somewhere too,” Reid said. “I’ve hammered the point about Eric Bieniemy. I just think the world of the guy, and he’s tremendous.”

In the past, silly NFL rules have worked against Bieniemy. Teams couldn’t hire a coach from a team that was still alive in the postseason. That meant assistants on staffs that made a deep playoff run were at a huge disadvantage. The NFL has made adjustments to try and remedy the situation. Now, teams with openings can interview candidates as soon as 12 days before the regular season ends.

Only two currently have vacancies: the Jacksonville Jaguars and the Las Vegas Raiders. But that number could increase by next week if other franchises decide to fire their coaches before the season finale so they can get a jump on the hiring process (The Chicago Bears? The Minnesota Vikings?).

Bieniemy has been rumored for a lot of jobs. Some at the college level (USC and Colorado among others). But he’s best-suited for the NFL, where he’s spent most of his coaching career. He hasn’t worked at a school since 2012 when he was Colorado’s offensive coordinator.

Why he hasn’t received a job offer is odd. He interviewed for five vacancies last winter. During Super Bowl week in February, Bieniemy took the high road.

“I learned a long time ago to learn how to persevere through adversity,” the 52-year-old said. “But the beauty of it is, it’s not so much that I have to persevere – because that’s gonna take care of itself – it’s making sure that whatever is taking place with Eric Bieniemy isn’t becoming a distraction in us pursuing our dreams and our goals.”

Seven coaches were hired for the 2021 season. Two were minorities: one was Black (Houston’s David Culley), the other Lebanese (New York Jets’ Robert Saleh). NFL commissioner Roger Goodell expressed disappointment over the lack of diversity, saying,  “I’m not sure there’s an issue we spent more time with our ownership on. Our ownership is committed and focused on this.”

The bottom line is that Goodell can’t force owners to change. And as mentioned previously, owners are really bad at hiring coaches. The reluctance to hire minorities doesn’t make sense from a business or competitive point of view. The wider net you cast for potential candidates, the greater likelihood that you’ll find the right guy.

And it’s not like Bieniemy is an obscure name. He’s the most obvious candidate out there. His work with Patrick Mahomes as the Kansas City offensive coordinator should be enough. The Chiefs’ run of excellence started in 2018, Bieniemy’s first year as OC after serving as running backs coach previously. This year, the Chiefs are second in the league in passing offense (285.1 yards per game), third in total offense (396.1), and fourth in scoring (28.1). All that after an early-season slump.

"Excuse me! Excuse me!!" –@pringle_byron, probably

There’s a perception that Reid has more to do with Kansas City’s offensive success than Bieniemy. Even if that’s true, why wouldn’t another team want someone that Reid has entrusted with his schemes, his secrets?

Teams keep hiring Bill Belichick assistants, even though none of them have accomplished anything noteworthy in the pros. Teams are quick to hire Sean McVay’s assistants after very little experience. Brandon Staley went from one season as defensive coordinator for the Los Angeles Rams to rookie coach of the Los Angeles Chargers. Zac Taylor wasn’t even a coordinator in two seasons with the Rams, but he landed a job with the Cincinnati Bengals in 2019.

Bieniemy might be better than last year’s hires. Of the seven new coaches, only Nick Sirianni of the Philadelphia Eagles has exceeded expectations and he’s 8-7.

What team should go after Bieniemy? If the Minnesota Vikings part ways with Mike Zimmer, that might be an interesting situation. The Vikings already have offensive weapons in Dalvin Cook, Justin Jefferson, and Adam Thielen. What they may need is a quarterback upgrade.

Bieniemy helped oversee the transition from veteran Alex Smith to then-unproven Patrick Mahomes. He would know what to do if the Vikings decide to draft a young passer to eventually succeed enigmatic Kirk Cousins.

But whether it’s Minnesota, Jacksonville, Las Vegas or elsewhere, Bieniemy deserves a shot to prove himself. He’s had to wait far too long.