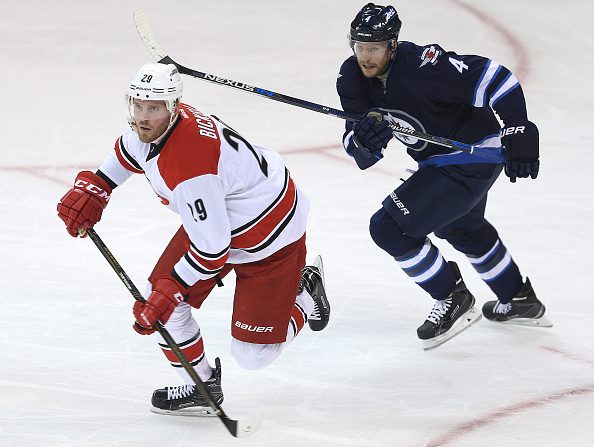 During every NHL season, there are always teams that come out of nowhere to make noise — not only to contend for the playoffs, but to actually qualify for the postseason. Last year, the Columbus Blue Jackets assumed that mantle with their incredible 16-game winning streak. With parity the way it is in the NHL, there is bound to be another team that pushes along those lines.

Here are three potential contenders that could be surprise playoff teams in 2017-18:

Shouldn’t it be well past due for the Jets to become consistent playoff contenders? Since coming to Manitoba six years ago, the Jets have made one playoff appearance and in that season (2014-15), they were swept by Anaheim.

By now, some of their great drafting prowess should lead to consistent success on the ice for Paul Maurice, and maybe this is the year to do it. Both the Wild and Blackhawks could be down from recent successes, leaving an opening in the Central for them to fill. Mark Schiefele, Nik Ehlers, Patrik Laine, Jacob Trouba and company are a good young core to build around, and the Jets have been trying unsuccessfully for years to augment that core with pieces around them to finally take that next step.

There may never be a better time in Winnipeg to take that next step than this year. What has held the Jets back in the past is very strong loyalty to players like Blake Wheeler and Bryan Little, among others. But with the emergence of some young talent and Kevin Cheveldayoff’s new willingness to dip into the free agent pool to fix areas where they are weak, maybe this will be the long-awaited time when the Jets finally take the next step as a bonafide playoff team.

Laugh all you want at this notion, but the Arizona Coyotes might be good this season. John Chayka made some bold moves this offseason to take his team from perennial lottery team to potential playoff contender overnight, and he didn’t have to give up much to do it. He added Derek Stepan, Nik Hjalmarsson, Jason Demers and Antti Raanta to his young group of forwars, plus the perennially under-appreciated Oliver Ekman-Larsson and gave up next to nothing to do so.

Before you think I’m entirely insane, look at the top four D for Arizona: Ekman-Larsson, Hjalmarsson, Demers and Goligoski. For a “bad team,” that’s a pretty stout group. They will need some of their young forwards to take fairly big leaps forward in order to realize this promise, and there may be one too many for new coach Rick Tocchet to mold in one season.

But there is quite a bit of promise here, and the potential for some solid goaltending and defense to fulfill this promise up front. They are nowhere near as bad as Vegas and Vancouver, at the very least, and it would not be at all a surprise if the desert dogs give the Kings and Sharks quite a run for their money. In any event, the Coyotes will be a great NHL.TV watch this season in almost every game.

When our staff was kicking around teams to put on this list, we wondered whether it was appropriate to put Carolina here. Everyone has praised the Hurricanes offseason up and down, no matter where you look. Analytics love this team, love Bill Peters, and with an actual goaltender between the pipes, it stands to reason that this team isn’t a sneaky playoff contender; they’re just a contender, period.

All of this is true. However, the Hurricanes are here because they are still a team that hasn’t made the playoffs since 2009, and would still need quite a lot to go right if they were to end that drought. Part of the problem? They’re in the Metro division, the toughest division in hockey by a fair distance. Scott Darling, while great in spurts for the Blackhawks, is still unproven as a number one goaltender. And with so many great young players to gawk at, especially on the blue line, there is a chance for one or more of them to hit a wall, as many young defensemen do at some point.

But then you think about the talent they’ve collected, and you try to ignore those concerns because the league would be better if the Hurricanes were successful. The style of play in the NHL would be better if more teams played the Bill Peters way, and constructed their team like Ron Francis has done.

Because of the division they’re in, they’re not likely to make the playoffs, which is why they’re here. But of these three, they are the most likely to “surprise” the average fan and end their long playoff drought.