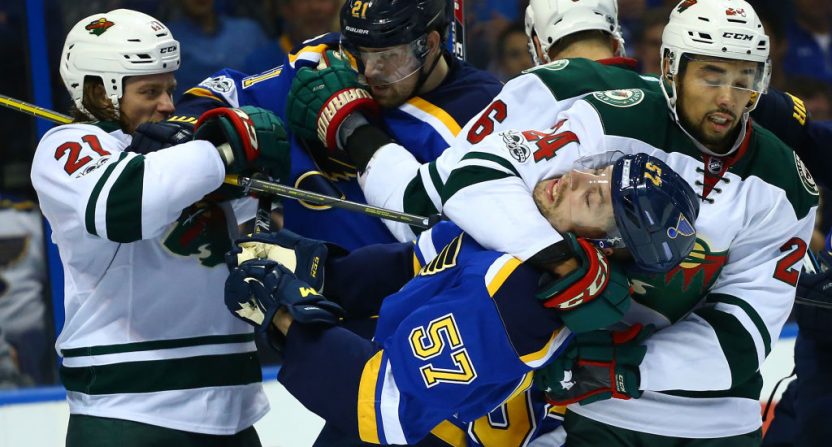 If you’ve watched the first four games of the playoff series between the St. Louis Blues and the Minnesota Wild, you’ve seen an insane number of faceoffs called back by the officials and plenty of forwards booted from the circle. At first it seemed like the officials were struggling to drop the puck fairly, but the Blues have a theory of their own regarding some faceoff shenanigans.

Following their Game 4 loss, the Blues discussed all of the faceoff delays and accused the Wild of cheating while taking draws. Specifically, the Blues said that the Wild players weren’t putting their sticks down on the ice first during Blues home games (the road team has to have their stick on the ice first during a draw) and were also trying to win draws by hitting the puck before allowing it to hit the ice.

Via the St. Louis Post-Dispatch, Vladimir Sobotka discussed the “cheating” during faceoffs:

“In the defensive zone. they’re supposed to be first with the stick on the ice and we come in second, so we should have a little advantage there, but they cheat a lot. We need to adjust that and try to cheat more too. They’re not holding the stick on the ice so we need to have better timing.

That’s what happened last game. (The linesmen) tried to make it a clear faceoff. Sometimes they played the puck before it hits the ice. That’s why we got kicked or they got kicked.”

Kyle Brodziak added his own thoughts:

“I think they’re trying to make the faceoff as fair as possible. When they drop the puck, the puck’s supposed to hit the ice. They were hitting the puck (early) a lot so draws weren’t going straight down so I think that’s why they were kicking guys out. I know it slowed the pace of the game up quite a bit but I know the linesmen were just trying to make the faceoffs as fair as possible.”

“Faceoffs are something that’s been a big story right from the start. I think for the first three games we obviously didn’t do real well in faceoffs. We’re trying to do what we can to equal the advantage and we feel there’s been some cheat on the other side. We’re just trying to make sure we go in with the mindset that we’re going to force everybody to be starting on equal terms.”

Do those comments sound like the Blues hold a 3-1 advantage in the series? The club may have a point – there have been a ridiculous number of draws called back due to infractions by the Wild – but it’s an asset of the game you have to overcome. Complaining doesn’t do much as it’s highly likely the officials are already well aware of the situation. Nothing positive is being gained.

Should the officials decide the Wild are repeatedly cheating, they could assess a two-minute penalty when two infractions occur on the same faceoff. Otherwise, the Blues should probably be more focused on closing out their series than publicly commenting on whether or not the Wild are cheating on faceoffs.