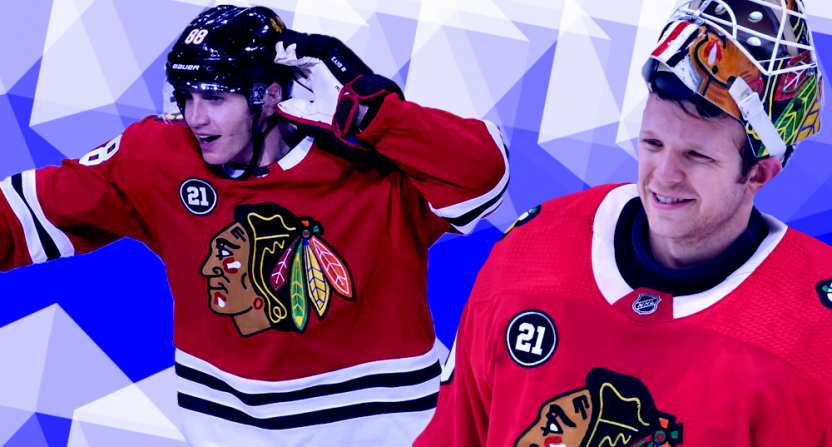 On December 11, the Chicago Blackhawks hit rock bottom. After getting blown out 6-3 by the Winnipeg Jets and registering their eighth consecutive loss, they fell to 9-18-5, the worst record in the NHL. Chicago had no pulse. They were in the middle of starting a rebuild after a modern dynasty, and had already fired longtime coach Joel Quenneville. The Blackhawks flatlined. Yet, somehow, the team has now battled its way back into playoff contention in one of the more surprising midseason turnarounds in 2018-19.

The Blackhawks now sit just three points out of a wild-card spot in the West. And they have a few different people to thank for propelling them up the standings.

First and foremost, star forward Patrick Kane is playing some of the best hockey of his career, despite being in his age-30 season. The former NHL MVP has been on an absolute tear in his last 20 games with a ridiculous 19 goals and 43 points during that span. Kane has scored at least two goals in seven of those games and three points in eight of those games. Saying he’s on fire is an understatement.

With the hot streak, Kane is now second in the league in both goals (32) and points (78). Kane’s longtime teammate Jonathan Toews has also chipped in offensively, as the Blackhawks captain has chipped in 21 points in his last 16 games. The two have been firing on all cylinders.

34-year-old head coach Jeremy Colliton has also gotten the best out of some of his younger players. Dylan Strome, the third-overall pick in the 2015 NHL Draft, acquired in a November deal with the Arizona Coyotes, has found a home in Chicago. After failing to score more than 10 points in any of his brief stints in Arizona, Strome is just under a point-per-game pace with the Hawks, with 24 points in 30 games. Meanwhile, Alex Debrincat, an undersized winger who scored 28 goals last season as a rookie, has 16 goals in his last 23 games and is on pace to eclipse his career-high with 26 goals and 48 points in just 54 games. The offense, the power play, and the team’s top players are clicking at the right time.

It’s not just the offense that’s found some new life. While Chicago’s defense remains largely a mess, the Blackhawks are seeing some positive results in net. After atrocious seasons from both Cam Ward and Corey Crawford, 24-year-old goalie Collin Delia has stepped in and given Blackhawks a future to look forward to between the pipes. After starting the season in Rockford, Delia’s stabilized things in goal, giving the Hawks a consistently good performance. In 11 games, Delia is 5-2-3 with a 2.99 goals against average and a .922 save percentage.

The club’s recent success puts the Blackhawks in a tough position. Do they continue to gut the roster and try to bottom out for a much-needed rebuild? Or, do they keep scrapping along and fight for a low postseason spot and bank on experienced players like Kane and Toews taking them on a potentially deep run? It’s hard to say. After multiple Stanley Cups runs, it might be time to sell the roster when it’s still got value.

It’s important to remember the Hawks have a decent number of draft picks for the 2019 NHL Draft. In the upcoming draft, Chicago has seven picks, including their own first rounder and four selections within the top four rounds. While all the recent winning is great, the team’s long-term plans need to be addressed and the roster needs to be examined for what it is, top-heavy, expensive and featuring little in the ways of top prospects. If GM Stan Bowman can deal the hefty contracts of forwards Brandon Saad ($6 million per season until 2021), Artem Anisimov ($4.4 million per season until 2021) and defenseman Brent Seabrook ($6.85 million per season until 2024!!) then he needs to do it. Clearing dead money and acquiring future assets should be the priority, regardless of the Blackhawks’ playoff aspirations.

Chicago can’t deviate from rebuilding in hopes of being a bottom-seed playoff team. They need to keep wheeling and dealing and building for their next great team. If they manage to rebuild and make the playoffs at the same time, it’s an added bonus. But, there’s no reason the Blackhawks should actively look to add to their current roster. Unless they want to add more years to what’s going to be a lengthy rebuild.