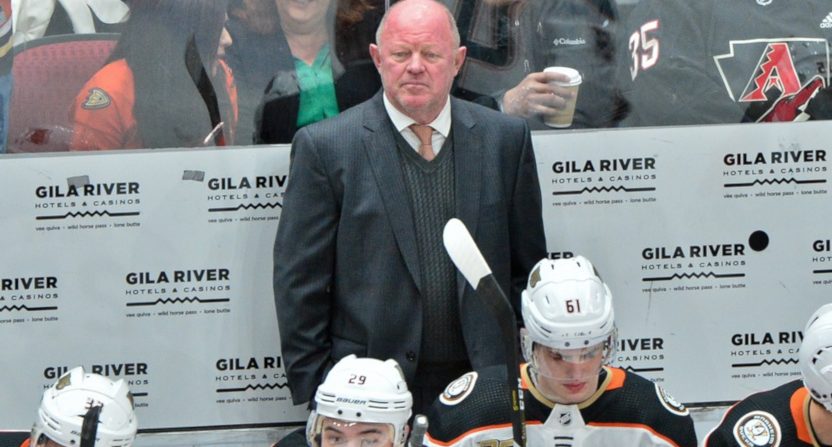 On Tuesday night, long-time Anaheim Ducks general manager Bob Murray (who had been with the team since 2005, and in that role since 2008) was placed on administrative leave around the announcement of an investigation into his workplace behavior from law firm Shepard Mullin. On Wednesday, Murray (seen above on the team’s bench during a 2019 game while he was serving as interim head coach) resigned, and said he would enter an alcohol abuse program:

Here’s more from that linked release:

The Anaheim Ducks announced today that Executive Vice President and General Manager Bob Murray has resigned from his position, effective immediately. Murray will enroll in an alcohol abuse program. As announced yesterday, Jeff Solomon will be the club’s Interim General Manager.

Following is a statement from Ducks Owners Henry and Susan Samueli:

“First and foremost, we apologize on behalf of the organization to anyone affected by misconduct from Bob. We expect every member of our organization to be treated with respect and will not stand for abuse of any kind.

Bob tendered his resignation this morning, while also informing us of his decision to enter an alcohol abuse program. While we do not condone his conduct, we fully support his efforts to improve his physical and mental health by asking for help.

We will now begin a methodical, extensive search for a permanent General Manager to lead us forward. We expect to complete this process no later than next summer.”

Following is a statement from Bob Murray:

“I want to apologize to anyone adversely affected by my behavior. I vow to make changes to my life, starting with enrolling in a treatment program. I want to thank Henry and Susan Samueli, and Michael Schulman, as working for them has been one of the highlights of my career. As I step away from the Ducks, I will focus my attention on where it should be: improving my life for the betterment of my family and friends.”

And here’s a NHL statement on this:

NHL statement regarding decision by Bob Murray to resign as general manager of the Anaheim Ducks. pic.twitter.com/0UwZkcmQ6M

The league statement there is particularly notable for confirming that this was “behavior that was recently reported through the NHL Hotline.” That does suggest that this hotline can be effective on occasion. It also indicates that in this particular case, that hotline did lead to Murray’s behavior being brought to the team’s attention, and to the team taking appropriate action before any media reports on the issues here. That’s significantly different from the Blackhawks’ situation. And it’s also promising that Murray is entering an alcohol-abuse program. However, that itself is a stark contrast to the Blackhawks, where the NHL has refused to offer any financial support for counselling and treatment for John Doe 2, a then-high school player victimized by an ex-Blackhawks’ staffer who was not properly reported to the police.

And this is far from a universal sign that the hotline will fix everything wrong in the league. The NHL response to the  in particular has been quite underwhelming. Still, it’s promising to see that a hotline report led to a team-launched investigation and then a resignation, and that does suggest that the hotline can be a useful tool in some circumstances. We’ll see how that goes going forward.