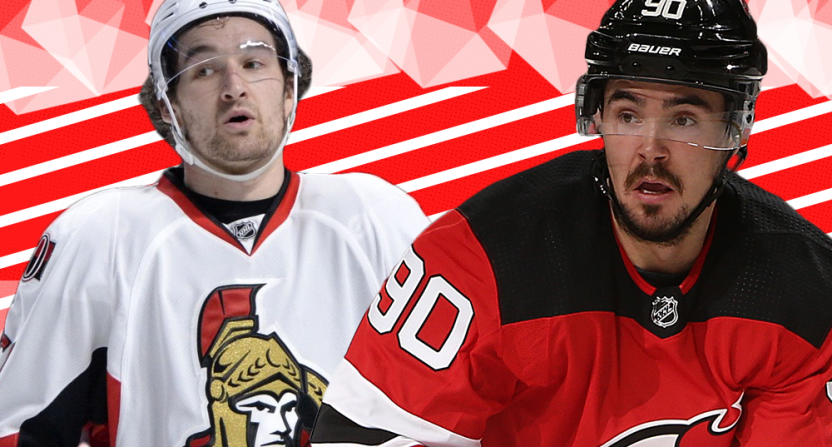 The NHL’s trade deadline is less than a week away, and teams are starting to gear up for the playoffs. With five days until the February 25th trade freeze, teams need to decide (if they haven’t already) if they’re buyers or sellers. It’s not an easy decision for some organizations, but for five teams, it’s clear they need to sell during the deadline.

Ottawa is the most clear-cut team needing to sell at the deadline.

The Senators have the worst record in the NHL, as their rebuild is in full-force. Despite their struggles, Ottawa still has two of the biggest trade deadline chips in center Matt Duchene and right winger Mark Stone. Both players are first-line talents in the midst of career years. Duchene has 27 goals, 31 assists, and 58 points in 50 games, while Stone has 28 goals, 34 assists and 62 points. The duo are unrestricted free agents at the end of the year and letting them walk shouldn’t be an option. GM Pierre Dorion should be able to land some nice assets for both players. Meanwhile, Ottawa’s got some attractive depth pieces. Left winger Ryan Dzingel has 20+ goals and is an unrestricted free agent. Mikkel Boedker is owed $4 million next season, but if the Senators eat some of his contract, they could probably get a draft pick or two.

Ottawa’s got a really nice opportunity to bring in young talent and future assets. But, if any team can screw this up, it’s the Senators.

The Rangers have kept their heads above water in 2018-19, putting up a winning record during a rebuilding season. GM Jeff Gorton shouldn’t (and I’d be surprised if he had the mindset) cling onto getting a late seed in the playoffs. New York should sell and continue to stock up for the future.

With forwards Mats Zuccarello, Kevin Hayes and defenseman Adam McQuaid, the Rangers have some veteran forwards who are set to become UFAs that playoff teams would covet. Zuccarello, in particular, could land them a high draft pick. Dealing Hayes and McQuaid for draft picks or young players is a no-brainer, even if the return isn’t particularly high. Gorton should be flexible to move just about anybody on his roster for the right return. Clearing future money should be a priority.

New York needs to stay on its rebuilding path. Selling at the deadline seems like the obvious play when it comes to the deadline.

Detroit shouldn’t be picky when it comes to dealing veterans to clear cap space, because as the team sits now, they’re expensive, old and lacking premiere young talent.

There isn’t a single player GM Ken Holland should keep off limits, but his focus should be finding a sucker to take on the contracts of forwards Frans Nielsen ($5.25 million per until 2021-22), Justin Abdelkader ($4.25 million per until 2022-23) and Darren Helm ($3.85 million per until 2020-21). Using assets like defenseman Nick Jensen, forward Gustav Nyquist and goalie Jimmy Howard – all of whom are unrestricted free agents – to move those deals would be wise – even if it means the return coming back isn’t as strong.

The Red Wings need to address their hellish cap situation and should use the trade deadline as a springboard into hopefully moving some bad contracts.

The Blackhawks’ dynasty is over and with it, a new era is ready to be ushered in.

Chicago’s been playing decent hockey as of late, but shouldn’t be deceived into making one last playoff run. Instead, GM Stan Bowman needs to move around some pieces around and build a future core for the Blackhawks’ next run at contention. Defenseman Adam Boqvist is a nice building block. Bowman won’t have an easy job, as long-term contracts to defenseman Brent Seabrook ($6.85 million until 2023-24) and Duncan Keith ($5.5 million until 2022-23) are nearly unmovable. Forwards Brandon Saad ($6 million per until 2020-21) and Artem Anisimov ($4.5 million until 2020-21) can be moved, but Chicago will have to eat some money.

The Blackhawks will have to be extremely creative to facilitate deals. If Bowman can move some of the long-term contracts, that’d be a big win. If the Hawks move some pieces and still make the playoffs, that’s a bonus. But, slowing down a rebuild and keeping pieces for a playoff run this season would be silly.

New Jersey was a surprise playoff team in 2017-18, but the Devils were hit hard by regression this season and have slumped to the bottom of the standings.

This team isn’t qualifying for the postseason, so moving vets and gathering draft picks and young players is a must before Monday’s deadline. Getting a second-round pick from Nashville for Brian Boyle was a nice move. New Jersey’s prime asset is left winger and pending UFA Marcus Johansson. The 28-year-old Swede is an ideal fit in most team’s top-six and is a steady point producer, even if his production in 2018-19 has been just OK. If Boyle yielded a second-round pick, a first-round pick for Johansson isn’t out of the question.

Players like wingers Drew Stafford, Kenny Agostino, and defenseman Ben Lovejoy are unrestricted free agents at the end of the season and can be had, but it’s doubtful the Devils could get much for any of them. But if anyone offers a low pick, New Jersey shouldn’t think twice.