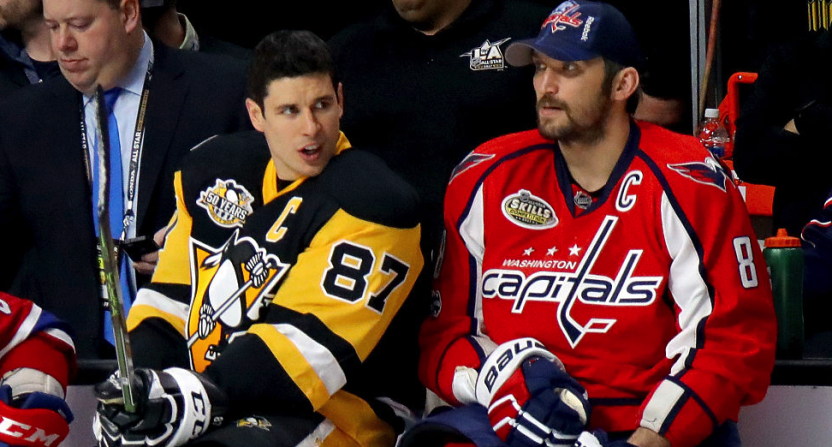 The timing of this week’s NHL Mailbag could not be better (for me, anyway). A very fun and good first round of the Stanley Cup Playoffs has come to an end, but with no Game 7s, there’s no hockey again until Wednesday night. Even worse, the Penguins-Capitals series doesn’t start until Thursday.

So to fill your gap, here are some questions and answers (including one about the important topic of sex with burgers). Mailbag!

Let me state right off the bat that if this is some clever way of tricking me into agreeing that a burger isn’t a sandwich, nice try. A burger is a sandwich. But for the purposes of going along with the bit, here are my answers.

I kill burgers. A sneaky fact about burgers is a lot of them aren’t good. Burgers are like HBO dramas, where you are trained to assume they are great because they are dramas on HBO, yet some of them are actually pretty bad. Yes, that was me subtweeting The Leftovers. I don’t know what the hell people see in that show.

But that’s burgers. Yeah, you’re going to get your fair share of Sopranos burgers and Wire burgers and Band of Brothers burgers, but there are a lot of Leftovers burgers and The Night Of burgers and True Detective season two burgers hiding in the brush, waiting to disappoint you.

I make sweet love to sandwiches. Again, going along with the false idea that burgers and hot dogs aren’t sandwiches, you’re left with a wide array of hot and cold subs that deserve your sex. Meatball hoagies. Roast beef subs. BLTs. The list goes on and on.

But I want to grow old with pizza. Thin crust, deep dish, New York style, toppings, no toppings. Even when pizza is bad, I still love it. That’s what a committed relationship with pizza is all about. You take the good (brick oven) with the bad (St. Louis style) and never look back. We’d raise tiny little personal pizzas and if they grew up to marry some gluten-free pizza, we’d accept that into our family.

@davelozo Who is on your Mount Rushmore of HBO shows? I got Tony Soprano, Larry David, Tracy Ullman, and the Cryptkeeper.

And while we’re on the tangent of HBO shows.

I reserve the right to bump any of those four off the mountain depending on the future of The Young Pope.

@davelozo as a CBJ fan how long do I get to be annoyed that in a properly seeded bracket we'd have played ottawa in the first round?

No. But they’re not bad, either. They’re OK. They needed six games to beat an AHL team and two of those wins came in overtime. If they get anything less than throttled by the Rangers, I’d be stunned.

@davelozo 1) Will the Rangers/Sens series be boring AF? 2) Which GM should be worried about getting canned more, Bowman or Bergevin?

I thought Bruins-Senators would be boring as hell, but it was only boring as heck. It really depends on who scores first most nights. If the Senators are dictating play and clogging the neutral zone the way you’d clog a toilet the morning after a Taco Bell binge, you’re going to wish you were dead by Game 3. If the Rangers’ speed controls things, then it will be fun.

I personally think the latter will happen with flashes of Erik Karlsson greatness, but then again, I went 4-4 in the first round. What do I know?

As for the second part of your question, if this season doesn’t get Marc Bergevin fired, I don’t know what will. Carey Price may have to ask for it.

@davelozo What's more entertaining: the most ot games ever, but no game 7s, or half the number of ot games, but 3 series go 7?

I’d have traded six overtimes for one Game 7. The first round was fun, but I sort of built a tolerance to overtime toward the end. It became part of my expectations. It almost ruined Leafs-Caps Game 6. “Oh, Marcus Johansson tied it late in the third period? Well, yeah, what else would happen in that situation? Yawn.”

The worst overtimes are the ones where you’re just waiting on the inevitable, like when the Rangers were pummeling the Canadiens in Game 5 or when the Oilers were running down the Sharks in Game 5. Those aren’t fulfilling overtimes. It was like in American Gangster when Cuba Gooding was selling the crappy version of Blue Magic and all I wanted was to inject Denzel Washington’s pure heroin right into my veins.

@davelozo The Hurricanes were a lot of experts' picks to make the playoffs this year. Do they have a better chance next year?

[checks to see if Cam Ward is still under contract with the Carolina Hurricanes next season] Nope.

8. March Of The Penguins

Come on. The Penguins have no Kris Letang, no Matt Murray and other assorted injuries. The Capitals are the best team in the NHL and completely healthy, save for Karl Alzner, who may be fine by the time the series starts Thursday. It doesn’t mean the Penguins can’t win, but they sure as hell aren’t the favorites. Stop watching Broadcast.

Whoever wins this series is the favorite to win the Stanley Cup by quite a few miles (kilometres), that’s for sure. It’s basically a repeat of last season when this series served as a second-round Stanley Cup Final, only instead of a very good Tampa Bay Lightning team lurking in the conference final, the winner will get a very beatable Rangers or Senators team.

You have to hate this playoff format. Just go 1-16 and let teams cross over and face teams in the other conference.

@davelozo Why do people think Wawa sandwiches are good?

Why does anyone think Wawa anything is good? Or Sheetz? People argue all the time which is better. There’s nothing like a debate over which rest stop garbage factory makes a less shitty sandwich or has slightly better shit coffee. Those places make perfectly acceptable food, considering the circumstances. We are not far away from debating which Sbarro on the Garden State Parkway has the best mushroom slice and cleanest toilets.

@davelozo why can't the Wild win in the playoffs

They don’t have good enough hockey players. Lucky for them, the contracts of Zach Parise and Ryan Suter will expire in… oh, forget it.

@davelozo Favorite movie about an ogre who has to save a princess in order to get his swamp back.