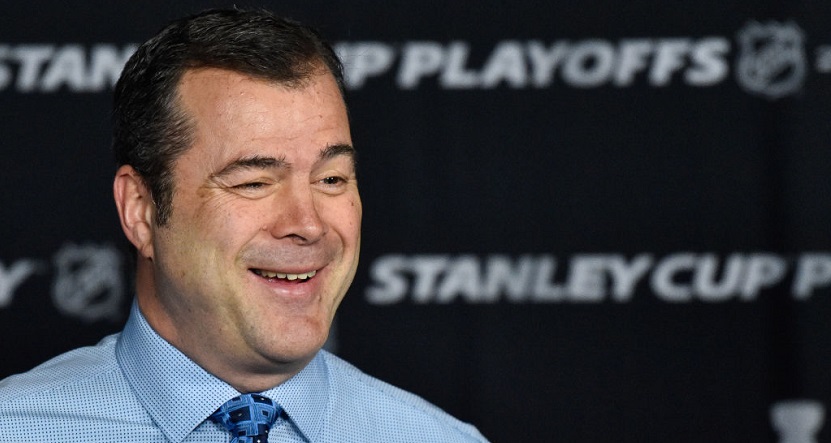 Is there any chance the New York Rangers fire Alain Vigneault? What’s the best way to have a Subway sandwich? And what’s the deal with Sidney Crosby returning from a concussion so quickly?

Please enjoy the NHL Mailbag responsibly and don’t rush back from anything you’re doing to read it, because your health is all that matters around here. Mailbag!

@davelozo if Ottawa closes out NYR is AV's job in any jeopardy? (not that I have any vested interest or anything)

Alain Vigneault getting fired seems impossible. He was given a three-year extension in January. He’s signed through 2019-20 and the deal is worth a reported $12.25 million. There’s just no way Vigneault is getting canned less than six months after the Rangers made a long-term investment.

I barely understand the inner workings of my own life, so I won’t pretend to understand the inner workings of the Rangers’ front office. General manager Jeff Gorton must like Vigneault, because he gave him the new contract. The relationship must be good, because of the aforementioned new contract. Sure, people get divorced because of things they learn early in the marriage, but that’s not what’s happening here.

Since the extension announcement in January, Vigneault made Tanner Glass a regular in the lineup at the expense of mostly Pavel Buchnevich. Vigneault shortened his bench (the young guys) in one overtime loss to Ottawa and refused to play Brady Skjei (another young guy) toward the end of regulation in another overtime loss to Ottawa. He’s leaning on inferior players because of veteran status and past playoff glory, and it may be why the Rangers lose a very winnable second-round series.

To determine whether Vigneault will be fired, you have to wonder if Gorton-Vigneault have that Billy Beane-Art Howe relationship where the coach isn’t playing the best players in optimal situations and the only way to fix that is by getting rid of the coach (since you can’t trade players in May). Is Gorton stewing in the luxury suite as Dan Girardi and Marc Staal play minutes that should go to Skjei and Brendan Smith, Gorton’s trade-deadline acquisition?

The extension says no, Gorton and Vigneault are on the same page and Gorton understands hands have been tied because of contracts handed out by Glen Sather before he left in 2015. But all of Vigneault’s moves since the extension may be that moment after a wedding where you realize your spouse clogs the DVR with 2 Broke Girls reruns and maybe if you knew that, you wouldn’t have engaged in the partnership.

If Vigneault is fired after this season, yes it will be surprising, but you can point to a lot of moves since the extension that could be considered grounds for dismissal.

You mean he isn’t currently doing that?

The only two ways to eat a Subway sandwich is out of desperation and with the bread not toasted. Toasting Subway bread causes its consistency to change to something not of this world. You know those CGI death scenes in The Mummy movies where someone turns to sand? That’s what it’s like biting into a toasted Subway sub.

That CGI death scene may not happen in The Mummy movies. I don’t know.

@davelozo Did crosby not have a concussion or did he get put back into play too early?

Five days. That’s how long it took Crosby to go from concussion to playing again. He missed one game. That’s a shorter time for clearance than most NFL players get when they suffer a concussion on Sunday then return the following Sunday, and that always seems insane when it happens.

This is Crosby’s fourth or fifth reported concussion, depending on how you want to interpret whether he was over the Dave Steckel concussion before the Victor Hedman concussion, and second this season. It’s ridiculous that he was back for Game 5. And you’re probably asking, “Dave, I’m sorry, but are you a doctor?” That’s not important.

There are only two reasonable reasons for Crosby coming back so fast.

I sure hope 20 years from now we're not reading stories about Sidney Crosby's declining health pic.twitter.com/pakQJCfA7Y

a) He was never concussed. The Penguins lied about the concussion in an effort to force the NHL into suspending Matt Niskanen, so they held out Crosby for just about all of Game 3, which they were losing for almost its entirety. Crosby was good enough to return for Game 3, but it was all a ruse. Once the ruse didn’t work, the Penguins had to sit Crosby one game to avoid suspicion. This is the reasoning of an idiot.

b) Sports are awful and for reasons too long and in depth to list, teams and players feel pressure to return from potentially life-destroying injuries in the long term in order to achieve success in the short term. There aren’t enough checks and balances to prevent players from putting themselves in this position and teams will do everything it can to look the other way on concussions. I think there may be an ongoing lawsuit pertaining to this idea.

Some people got mad about lauding Joe Thornton for playing on torn knee ligaments in the first round. Not me. Yeah, it’s annoying to hear how hockey players do this but basketball players do this, but all the looking out for the well-being of a 37-year-old man at the end of his career who decided to play on a busted knee was a little much. Using a brace to support a knee when your career is about to end is a little different than someone knowing how to get around concussion tests and taking the ice with a brain injury.

But hey, this stops being a thing because Crosby hasn’t had his next concussion yet. Then he will be hit in the head again, and we will have the same conversation whether he returns in a week or a year. Crosby rushing back from this concussion is weird no matter how he performs on the ice.

@davelozo Who's starting in goal for Vegas? Or, Ginger or Mary Ann?

@davelozo what's something that you love, that everyone else hates

When the mailbag is over.