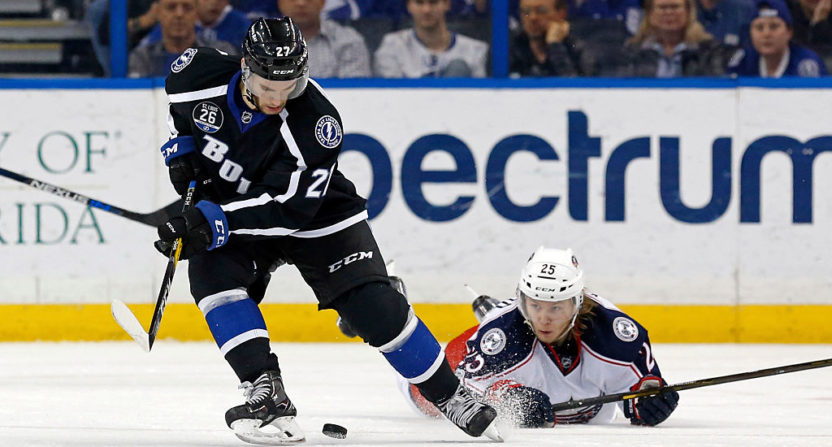 The NHL offseason was always going to be weird and this one looks like it’s off to a proper start.

As the NHL expansion draft for the Vegas Golden Knights looms, the Montreal Canadiens have acquired left wing Jonathan Drouin and a conditional sixth-round pick in 2018 from the Tampa Bay Lightning for defenseman prospect Mikhail Sergachev and a conditional 2018 second-round pick.

On the surface, this is a rare trade involving two young assets. Drouin finally broke out this past season, putting up 53 points in 73 games. He appears to be just touching the surface with his skill. Meanwhile, Sergachev is still only 18 years old and considered one of the best defensive prospects in the game.

Drouin is young, has a ton of talent, and will only get better. Losing Sergachev is heavy, but at least it's for a prime asset.

Drouin had a well known holdout with the Lightning that may have soured the relationship between the player and organization. Tampa Bay needs young defensemen badly and they had to pay a very high price for it.

As of right now, the Canadiens traded for a tangible asset and were willing to give up a lot to do so. But it’s a rare trade in any league, let alone the conservative NHL. The Lightning are banking on potential and were more than willing to give up on one of their top talents to do it.

The condition of the trade centers on whether or not Sergachev plays 40 games in the NHL next season. If he doesn’t reach that mark, no picks are exchanged. Sergachev also burns a year if he plays 40 games, bringing him closer to unrestricted free agency. Oddly, the conditions make sense for both sides.

What makes the deal additionally great for each team is the added slot the Lightning now get for trading Drouin. Sergachev isn’t eligible to be selected in the draft, meaning that Tampa Bay can protect someone else. The move helps out Lightning in both the short term and long term. General manager Steve Yzerman won’t have to sign him to a pricey extension either.

The Lightning and Canadiens benefit, as do hockey fans who want to see offseason movement. Let the games begin.