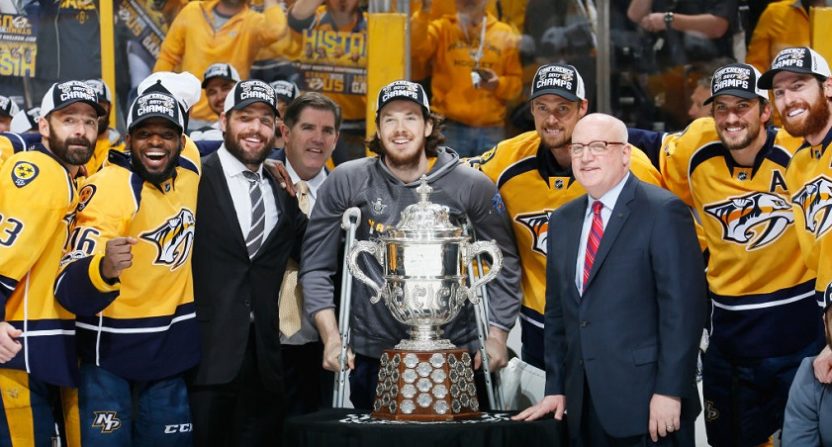 When an eight seed in the postseason makes a run all the way to the Stanley Cup Final or the NBA Finals, normally that success is considered a surprise, a Cinderella story that’s somewhat unprecedented. On the surface, what the Nashville Predators have done by seemingly scraping into the playoffs would easily qualify, with that perception enhanced by a first-round playoff sweep over the best team in the West during the regular season, the Chicago Blackhawks.

But are the Predators really a Cinderella story like the Edmonton Oilers in 2006 or to a lesser extent the 2012 Los Angeles Kings, or are they a team with a different story to write that’s more complex than a one-word narrative?

The Predators took the would-be Western Conference champion San Jose Sharks to Game 7 in round two last year. They had always been considered a young team on the rise, and that perception was only enhanced and emboldened with the earth-shattering trade that brought P.K. Subban to Nashville. Many around the NHL certainly thought this move pushed the Preds to the top of the list of Stanley Cup contenders, including one P.K. Subban:

And when it came time to predict the outcome of the 2016-17 season, many agreed with P.K.’s sentiment. Multiple pundits on NHL.com, ESPN, Sports Illustrated, CBS Sports, Sportsnet and Puck Daddy all believed the Predators had a chance to not only make the Cup Final, but win it. TSN’s Scott Cullen picked the potential Stanley Cup Final on the nose before the season started, and he wasn’t the only one. The broad consensus around the sport was that the Predators were a team that could easily take a step beyond what they did a season ago. But this sport is not always kind to favorites, and the Preds didn’t have a smooth run during the regular season.

They were absolutely saddled with injuries during the start of the season. Pekka Rinne looked as if he was a shell of the goaltender he once was. At the turn of the New Year, the Predators were three points out of a playoff spot. After 41 games, the Predators were one point away from a postseason bid and the Tennessean called the team “below average.”

“It’s kind of what we deserve,” said center Ryan Johansen at the time. The biggest problem, according to the team at that time, was consistency. At the midway point, the Preds hadn’t won three games in a row since Thanksgiving and after a nine-win November had gone 7-8-4 since.

At the best…the VERY best…this Predators hockey team is average. Right now. Has potential, but average to below average now

“There are probably 15 games this year where we’ve just spanked teams, where we play our style of play … and we go out and execute almost perfectly,” Johansen added. “It just seems like a couple of breakdowns, a couple mistakes in games have cost us. … Whoever wins the (Stanley) Cup is usually the most consistent over and over and never (makes) those mistakes.”

But it’s this from beat writer Adam Vingan in the piece that really hammers home the point:

The Predators were the darlings of preseason predictions, the favorite among analysts and reporters to represent the Western Conference in the Stanley Cup final. Championships aren’t won midseason, but that faith, at least through the first 41 games, has been unrewarded.

Nashville is among the most disappointing teams in the NHL because it hasn’t lived up to those expectations. The Predators probably have buried any chance of winning their first division title and will spend the next 41 games in a fight for one of the two wild-card spots.

And so it turned out to be. The Predators did have to scratch and claw to find their way into the dance behind the surging Blackhawks; the Wild, who had built up such a huge cushion with their early season form; and even the Blues, who traded away their best offensive defenseman. Their late-season slips had meant the best they could be was the second Wild Card, meaning Nashville would have to play the Chicago Blackhawks in round one, a team that has tormented them for years.

So what changed in the postseason that made the eight seed look like Cinderella, or to many in the hockey world, the team they were predicted to be all along?

As with any team that wins 12 games in any postseason, it was a combination of factors. The Predators puck-moving defense absolutely tormented the slower and surprised Chicago Blackhawks, and became the backbone of their success against St. Louis and Anaheim. Players who needed to step up on the offensive end, who had done so only in spurts during the regular season such as Johansen, Filip Forsberg and others really turned on the style and substance when it mattered most. Together with Viktor Arvidsson, Johansen and Forsberg came together as one of the most fearsome top lines in the playoffs, which put them over the top.

But most importantly, Pekka Rinne, who had not looked anywhere near his best in the first half of the season, became one of the best goaltenders in the NHL once the lights were really turned on. At points during the regular season, there were calls for backup Juuse Saros to take over full-time. By the end of round one, no one would remember those calls, and for good reason.

So once the postseason started, the Predators started playing not like the eight seed that the standings said they were, but like the team everyone thought had as good a chance as any to win the Cup before the season started. Casual hockey fans and sports fans who only saw the Predators on national TV once during the regular season were left with the impression that the final standings provided and not much else. Based on preseason expectations, even compared to where they finished, this isn’t really a Cinderella team. But maybe in another, more global sense, Nashville as a hockey market is the Cinderella story that should be covered more.

When the Devils were on the verge of winning the Cup in 1995, there were persistent rumors that they were going to move to Nashville after the season ended. That obviously didn’t happen, but the city did get an expansion team three years later. As with all expansion teams, it was a slow burn, with the team making its first playoff appearance in 2004 and not winning its first series until 2011. But in the summer of 2007, the team was dogged with financial problems and potentially on the verge of moving to Hamilton, Ontario — with season tickets even being sold before anything was officially consummated — or even Kansas City.

A rally was held in July of 2007 that drew a crowd of 7,500 people and sold about 700 season ticket packages in order to show the NHL (and Canada) that Nashville as a hockey market wasn’t a failure. Then owner Craig Leopold then sold the team to a consortium of owners based in Nashville not too long after, keeping the team in Tennessee when it looked like they were one foot out the door.

Now, Nashville has become a success story of the NHL’s southern expansion, cultivating an environment unlike any other in hockey or in sports, embracing what is Nashville but with an edge of sarcasm, sardonic humor (throwing catfish started in response to the Octopus-tossing tradition in Detroit) and an intimate knowledge of the game that is distinctly theirs and theirs alone.

These Nashville Predators had the highest of expectations before the season to perform as they had never performed before. In the regular season, the team couldn’t meet that standard. But in the playoffs, when it matters most, they did. Now, this team and the city which has wholeheartedly embraced them get to experience the Stanley Cup Final for the first time.

While it’s clear the team itself isn’t the Cinderella story so many think they might be, or how narratives might eventually shape their story, the city’s own journey with hockey to this point might fit the glass slipper just right.

And apropos of nothing, what do you think Montreal Canadiens general manager Marc Bergevin, the man who traded Subban to Nashville, is doing right now? For his sake, he’s hopefully not watching much TV or looking at Twitter. It might be time to head to the summer cottage just a little bit early.