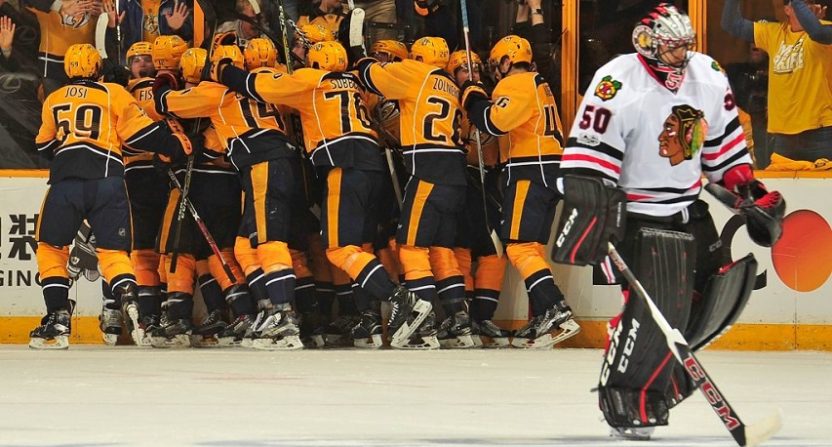 It is incredibly difficult to maintain any sort of sustained success in the salary-capped NHL, but the Chicago Blackhawks have found a way to be a league power since first making the playoffs with Jonathan Toews and Patrick Kane in 2009. They’ve won the Stanley Cup three times since 2010 and have been a “dynasty” in the modern sense of the word and standard bearers for the NHL.

But after suffering a surprising first-round sweep by Nashville in which they scored only three goals in four games, what is next for the Blackhawks? Is it time for tough questions to be asked of this team?

Maybe the Predators beating the Blackhawks in this series shouldn’t be considered a surprise. Many people (including me) thought Nashville would be a Western Conference favorite going into the 2016-17 season. Meanwhile, Chicago looked to take a few lumps as they introduced some young players to their lineup. But the Blackhawks ended up with the most points in the West anyway, capitalizing on a massive March swoon by the front-running Wild and getting better than expected performances from players like Richard Panik, Nick Schmaltz and others, especially early in the season. But Chicago started to fall off in March, and once the Stanley Cup Playoffs began, they couldn’t keep up with what the Predators were throwing at them from the word go.

While by seeding and Vegas odds, this was certainly an upset, featuring the first No. 8 seed to ever sweep a No. 1 seed since that playoff format began in 1994, it’s not like the Predators snuck into the playoffs. The Blackhawks were certainly aware of what Nashville could do, and had even beaten them in four of the five times they played in the regular season.

So what went wrong for the Blackhawks this season that had been going so right for them so often in recent years?

For one, could the insane amount of games the Blackhawks’ stars played in recent seasons have finally caught up with them? Toews, Kane, Panarin and Hjalmarsson all played in the World Cup of Hockey before the regular season started, and many of the Blackhawks’ long-term horses have multiple major international tournaments as well as over 100 games of playoff hockey on their legs since this amazing run started. At long last, maybe players like Toews and Kane finally showed signs of stress and strain. The Blackhawks supporting cast isn’t exactly fleet of foot either. They and their teammates looked a step slower than the Predators throughout the series.

If and when the strain showed on the Hawks during past runs, they had other players to pick up the slack. In 2010, the supporting cast featured players like Dustin Byfuglien, Andrew Ladd, Patrick Sharp and Kris Versteeg. 2013 featured the likes of Brandon Saad, Michael Frolik, Nick Leddy and herculean performances by lesser-lights like Dave Bolland and Bryan Bickell. Even in 2015, the Hawks had Andrew Shaw, Brad Richards and Teuvo Teravainen in addition to some of those other names.

This season? Other than Artemi Panarin, Chicago didn’t really have that secondary wave of scoring that buoyed them if the stars started to slip. Ryan Hartman, Nick Schmaltz, Richard Panik and others is simply not the supporting cast that those other Hawks teams enjoyed, and that’s all down to the salary cap pillaging Chicago’s roster every time they win the Cup.

With the combination of tired legs and a less-than-stellar supporting cast, the roof finally caved in on the Blackhawks as a younger and faster team eventually did them in. But does this mean that this amazing run of sustained excellence by the Hawks is over? Not necessarily, but for the first time in a long time, general manager Stan Bowman is going to have to make some incredibly difficult decisions that he hasn’t faced in quite some time.

As you would have guessed, Chicago’s cap situation heading into next season is not great. They only have about $2.7 million in cap space free for next season, assuming a flat cap, which is not enough to make substantial alterations to where this team needs them the most. They will almost certainly have to trade away 38-year-old Marian Hossa and his $5.275 million cap hit, as well as Marcus Kruger’s $3.083 million cap hit just to free up some meaningful space. To make those deals happen, the Blackhawks will likely have to part with assets such as draft picks or their better prospects, as they did after last season when they traded away Bryan Bickell and his contract to Carolina while giving up Teravainen to do so.

While Chicago does have some promising prospects in the system, such as 19-year-old sharp shooter Alex DeBrincat, most of their better prospects aren’t quite NHL-ready, and the lack of high draft picks over the years has meant the pool isn’t exactly deep either. The expansion draft looms on the horizon as well.

In order for the Blackhawks to be a true Cup contender next season, they need to get younger and faster, especially on the blueline. While doubting Stan Bowman is a pretty stupid idea based on his track record, this will likely prove to be his toughest task yet. While he does have nine draft picks this year to work with, and a few promising prospects, the Blackhawks will likely have to give up a few assets in exchange for cap flexibility before they can do anything else, which will handcuff them. Even if they can finagle their way out of cap hell, they’ll need young players like Hartman, Schmaltz, Hayden, DeBrincat and the like to have outstanding seasons next year, in addition to finding other players on the cheap who can be role players like the Bickells, Richards and Ladds of past teams.

There was doubt after the 2012 exit to the Coyotes whether the Blackhawks could sustain their success, and obviously they did. There will be doubt this time around as to whether they can maintain their success and while they have a GM and coach who have certainly proven that they can, the job ahead of them task is the most difficult during their tenures in Chicago. It’s going to be a tough offseason, regardless of how this team performed in the playoffs.

This isn’t quite the end of the Blackhawks’ modern-day dynasty, but their window is closing fast and there aren’t many ways left to keep it open.

1 thought on “What’s next for Chicago Blackhawks after shocking first-round playoff sweep by Nashville Predators?”