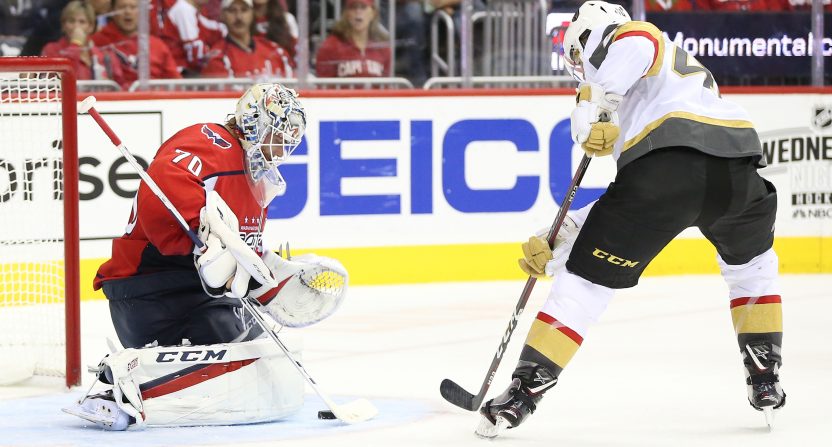 The NHL is continually looking for ways to boost scoring, but a recent equipment change might be a dangerous one. The league altered the chest protector regulations for goalies prior to this season, slimming down on the shoulder profile in the hopes of creating more offense. This change came a couple years after the league shrank goalies’ pants.

Unfortunately, the decision is already creating some painful moments for goalies.

For starters, Fleury is wearing an extra undershirt in an attempt to cut down on the bruises and stingers he’s receiving.

“You get stingers and bruises and stuff like that. I think the width is probably the biggest thing – the width of the shoulders and the width of the arms. Sometimes you feel a little skinnier, I would say. It took a while to find what I wanted, or what I would feel comfortable with.”

As for Holtby, he’s worried about what happens next. How will goalies protect themselves as sticks improve and players are able to shoot harder?

“You can deal with bumps and bruises and stuff, but you hope someone doesn’t get a broken bone out of it. If they keep making things like that, they’re going to have to start monitoring the stick technology because guys shoot so hard right now, we have no choice but to be bigger. . . . It’s OK now, but sticks keep getting better every single year. In five years, if we’re still wearing these, it’s going to get dangerous.”

Holtby went on to say he understands the league’s mentality, but he hopes they aren’t putting fan experience over player safety. Offense shouldn’t come with a larger risk attached for goaltenders. He hopes there’s some sort of happy medium found before something serious happens.

“You just kind of hope that they find a happy medium before (an injury) happens, where they can streamline the size, cut down on the guys who were using extremely big (gear), but not take away from the guys who weren’t before. Because there are a lot of guys who look the exact same or even bigger with these now when you look at them. It’s just tighter to your body and a little bit more dangerous.”

Meanwhile, the league is already defending the changes.

Daly on the new equipment:

“These have been very well vetted with the goalie community. These revised standards were formulated predominantly with the idea of maintaining goaltender safety. So I think the current comments are more a matter of adjustment than anything else. Obviously, if we really have an ‘injury’/ ‘health and safety’ issue, we would reevaluate. I’m fairly confident that won’t be the case.”

That vetting process also had some negative feedback. Remember back in July when a goalie testing the equipment cut the drill short while wearing the new protector? Things didn’t go quite as smoothly as Daly’s comments may lead you to believe.

There’s definitely an adjustment period that could result in some minor injuries, but the goaltenders are justified in their concern. Stick technology continues to advance while goaltender equipment continues to shrink. Those two paths could eventually come to a head that results in a serious injury.