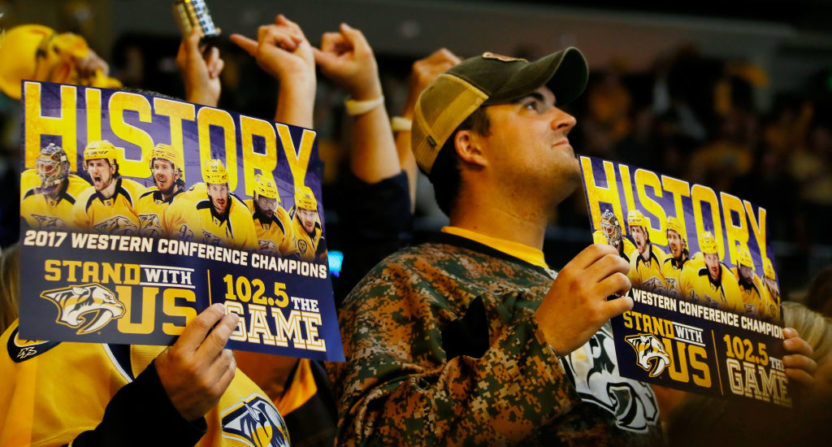 The Stanley Cup Final begins Monday. We already know it will feature the Nashville Predators playing Game 1 on the road. What we don’t know is which Eastern Conference team will be hosting the game, as the Pittsburgh Penguins and Ottawa Senators will conclude their painfully boring series with a Game 7 on Thursday night.

This doesn’t mean we can’t convene in this space now to prepare ourselves for the pain and suffering that will be inevitable starting next week — Stanley Cup Final storylines that will make you wish the NHL was in the midst of another lockout.

Sure, some of these storylines are contingent on the Penguins or Senators winning and won’t be relevant next week, but it also means these jokes are only good today and expire at around midnight.

Please use these future storylines to build a tolerance to them when they begin to flood your timelines. I’m sorry.

1. Nashville Is A City With A Hockey Team — The Predators have been in the NHL since 1998, but certain members of the media act as if they are space explorers and the city is on a magical planet of strange beings that look and act like Canadians yet speak with an accent and prepare a cuisine known as “hot chicken.” If we’re lucky, we’ll catch a reporter poking an inhabitant with a microphone mid-interview like they’re a dead body to see if they respond like other people.

Think of the city as a person. The person is nearly 20 years old. And media members are distant relatives that are flabbergasted to see how much they’ve grown. “Oh my goodness, Nashville. Look at you! I remember when you were just a little thing! Come give us a kiss.” And it will be said in that voice that’s better suited for talking to puppies than people. You will lose your mind somewhere between Games 3 and 4.

Do you like stories about barbecue and country music? You better, because you’re going to get a heaping plate of both.

2. P.K. Subban Is Actually Nashville’s Fourth-Best Defenseman — This storyline is also likely to come from the Canadian media, either because they hold some sort of grudge against Subban from his time in Montreal or they are idiots who don’t understand hockey. It’s probably the second thing, but the first thing can’t be ruled out.

Subban plays big, difficult minutes, scores a bunch and wins the possession battle. He’s one of the biggest reasons the Predators have gone from never reaching the conference finals to reaching the Stanley Cup Final in Subban’s first season.

3. The Predators Would Be Here With Shea Weber — Wrong. They would not. Anyone that tries to sell you the idea that Weber and Subban are equally good and the Predators would have gone to the Stanley Cup Final had Marc Bergevin not made one of the worst trades of all-time is lying, stupid or Bergevin himself.

4. Erik Karlsson Has Become The Best Defenseman In The NHL — Wrong. Again. He has been for at least two years, perhaps longer. Maybe he’s having his best season, as he’s lugging the mediocre Senators (maybe) to the Stanley Cup Final, but let’s not swallow that narrative from the people that didn’t realize Karlsson was the best before this.

• Sidney Crosby isn’t as tough as (some Predators bottom-six forward)
• P.K. Subban shouldn’t (do a thing that is fine)
• A blatant head shot by (someone) against (someone) is no big deal
• Someone on the Senators should retaliate for a dirty hit against (someone) by (blatant assault against a Predators star player)
• Beating someone with your shoe is good

6. Attendance At Senators Games Is Bad — If the Senators win Game 7 against the Penguins, there’s no way the building won’t be packed for Games 1 and 2 against the Predators. Or 5. Or 7. But it’s already been a thing during the first three rounds, with plenty of empty seats for Game 6 against the Penguins, so that will be a talking point to start the Final.

This is the inverse of the media descending on Nashville and being blown away by short ribs. Media that haven’t been to Ottawa in forever will need a story in the days leading to Game 1, and this will be it. It will die once the puck drops on the series, but if for some reason there are plenty of good seats available, hunker down and gird your loins for debates about what it means to be a fan and all that crap. 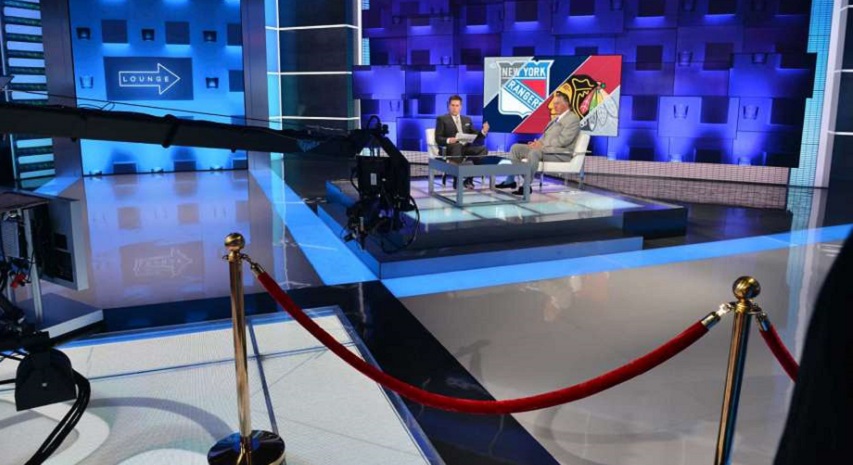 But if it’s Ottawa, look out.

And why is this a thing hockey fans care about? It’s definitely a symptom of #pleaselikemysport. Does any NFL fan worry about CBS’ ratings if it’s a Chiefs-Ravens AFC title game? Is any NFL fan sweating the ratings if the Super Bowl involves Jacksonville and Tampa Bay? Hockey fans care deeply about this and the hockey media knows this, so during one of the two-day breaks in this series, prepare to get a shovel-full of ratings stories.

8. The Ice Is Bad In Nashville — The temperature will be in the 80s when the series shifts to Nashville and the ice will probably be choppy and soft. This will be portrayed as a Nashville problem when it is, in fact, a the planet gets hot in June problem.

9. The Senators Are Boring — They are. This storyline is fine.

10. (A Bullshit Talking Point After Gary Bettman Gives His State Of The NHL Address) — There’s no way to know what it will be. The NHL has never been more fun. A team won’t relocate. The NHL has never been more profitable. He hasn’t thought about an upcoming lockout. Nobody cares about the Olympics. NHL.com is easy to navigate. Only the Blackhawks should play in outdoor games.

Your Twitter timeline will be peppered with media types quoting Bettman directly without offering any fact-checking or giving any consideration to what Bettman is saying is the truth. He should be treated like Sean Spicer when he’s addressing the media, every word carefully examined for spin or lies. It’s on you to think about it when Bettman says, “Concussions are down and we believe there is no connection between CTE and concussions so any lawsuit has no merit.”

So when you’re reading a story about the state of the NHL, in the immortal words of Al Pacino in the classic film The Devil’s Advocate, “Consider the source, son.”