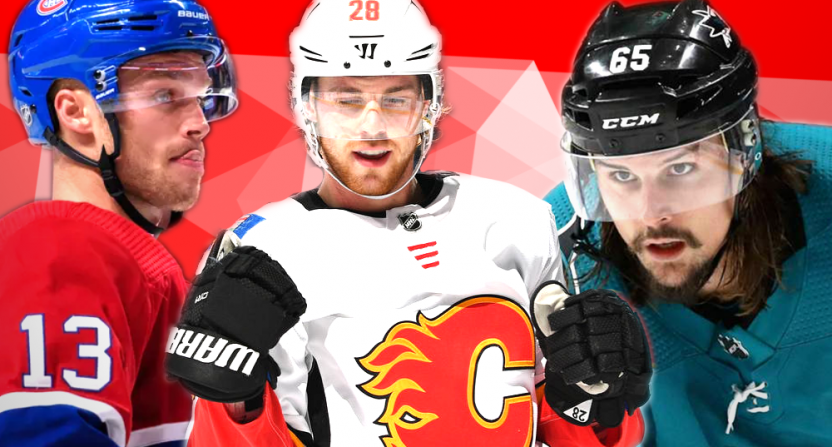 The NHL offseason was loaded with big trades, as teams looked toward the future in planning what direction they wanted to go as a franchise. Some teams added big pieces, while others traded them for future assets in order to rebuild.  Five big moves, in particular, stand out and are worth re-examining as the season approaches the finish line.

When this trade was announced back in mid-June, the general consensus among the hockey community was the Canadiens gave up the better player in the one-for-one swap. Domi was coming off back-to-back seasons where he scored just nine goals while Galchenyuk outproduced him in three straight seasons. Surprisingly, Domi’s been the better player thus far.

In 57 games with the Canadiens, the 23-year-old is already close to setting a career-high in points with seventeen goals, 32 assists, and 49 points. Domi leads the Habs in points while providing an edge the Canadiens lacked.

Galchenyuk hasn’t been bad in his first season in Arizona, but a slow start and injuries have hampered his production. The 25-year-old’s posted 12 goals, 18 assists, and 30 points in 47 games. The 6’1″ winger’s heated up in the last month and might end up being the more productive player long-term from the trade, but in terms of immediate production, the Canadiens are early winners of the deal.

Both teams are probably happy with their side of this particular deal, but the Calgary Flames have to be particularly thrilled about how the five-player trade ended up.

Teaming up with former Hurricanes coach Bill Peters, both Hanifin and Lindholm are in the midst of the best seasons of their young careers. Hanifin is averaging the most minutes he’s ever played and is on a 40-point pace from the blueline. Lindholm, who never scored more than 45 points in a single season in Carolina, is producing above a point-per-game pace and is tied for second in scoring for the Pacific Division-leading Flames with 25 goals, 40 assists, and 65 points in 57 games. The Flames inked both to team-friendly six-year deals following their acquisitions.

Hamilton and Ferland have just been just OK in Carolina. Hamilton’s ice-time and production have declined, and he’s on pace to score under 40 points for the first time since his sophomore season in 2013-14. Ferland’s been a consistent producer in Carolina, with 15 goals, 16 assists, and 31 points in 48 games, but both players’ production has been dwarfed by that of the players they were traded for.

After three productive seasons in Buffalo, the Sabres decided to send out O’Reilly in order to bring back a bunch of future assets. So far, the move has pretty much gone as expected for both teams.

O’Reilly is enjoying the most productive season of his career, leading the Blues in scoring at a point-per-game pace with 21 goals, 36 assists, and 57 points in 56 games. O’Reilly remains a tremendous two-way player who’s helped St. Louis’ late playoff surge.

It’s hard to fully assess the Sabres’ side of this deal since their return is all about rebuilding. Tage Thompson’s logged regular NHL minutes and the team dodged a bullet when Patrik Berglund walked away from $12.5 million after losing his passion for hockey. Buffalo’s been a fringe playoff team for most of the season, and there’s little doubt they could use O’Reilly’s production. However, the team is still building towards the future and the move gave them a nice amount of assets going forward.

Golden Knights GM George McPhee would probably like a do-over on this one.

Last season, McPhee inexplicably gave up a first, a second, and a third-round pick to Detroit for Tatar. After the 28-year-old didn’t produce in Vegas and was a healthy scratch for most of the Golden Knights’ Stanley Cup run, McPhee threw Tatar into an offseason move for Pacioretty. The move made some sense on the surface, as the Canadiens captain was coming off a down season and seemed primed to rebound. That hasn’t happened.

Tatar has outproduced Pacioretty, scoring 11 more points (41 in total) in 10 more games for the scrappy Canadiens. Pacioretty hasn’t been awful, but with 30 points in 46 games after signing a four-year, $28 million extension, the Knights had to expect more after making the deal. I still wouldn’t bet against Pacioretty being more productive than Tatar as the season closes out, but the fact it’s close is a surprise. Getting Suzuki (a high-end prospect) and a high draft pick gives Montreal the edge in this deal.

As expected, the Senators quality for quantity approach in trading Karlsson has yielded an underwhelming return.

While Karlsson continues to play Norris Trophy-caliber hockey with the Sharks, the Senators haven’t seen any player acquired in the trade break out. Tierney’s produced 38 points in 57 games, DeMelo’s been given regular minutes on the Sens blueline, and Balcers has appeared in 14 games, but none of them have justified the deal. Giving up a top-1o player for some depth and future assets was an embarrassing haul then and remains one now. Not getting multiple legitimate prospects was a huge failure by Pierre Dorion. The draft picks might be something eventually, but right now, they’re just mystery boxes. Erik Karlsson is Erik Karlsson.