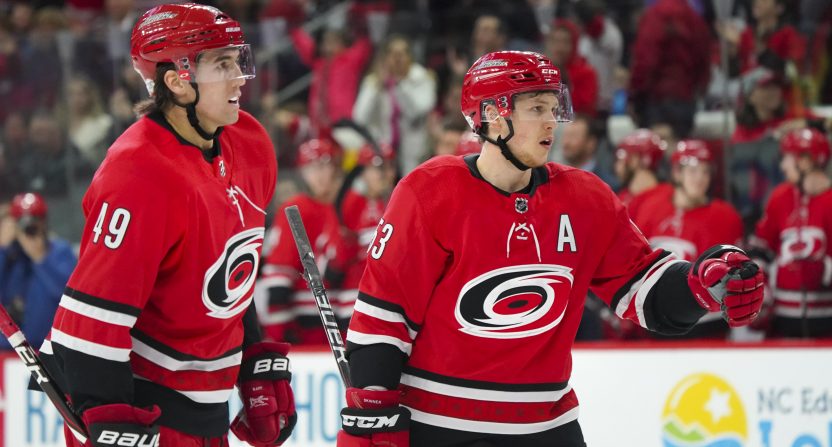 The Carolina Hurricanes are officially open for business. At least, that’s what it sounds like based on a recent interview with team GM Don Waddell. Trade rumors have swirled around team stars Jeff Skinner and Justin Faulk, but apparently more players might be on the trading block as well.

Regarding the futures of Skinner and Faulk with the Hurricanes, Waddell had a rather blunt response to NHL Network, as seen on FRS Hockey.

“I think right now, as I said, we have to look at every position on our hockey team here. We’ve gone nine years without making the playoffs and some guys have been here five, six, seven years. Not that they’re bad players – actually, both players you mentioned are some of our top players.”

The Hurricanes are long overdue for an overhaul. After years of mediocrity and disappointment, the Hurricanes have seemingly been content to keep their core intact. With Waddell at the helm, change may finally be coming.

“The guys you mentioned are guys certainly that people have called about. I’ve made it (clear) to every general manager I’ve talked to we’re looking to make changes. Certainly when other teams are calling they usually want to call about your better players. We’re in discussions with not only those players, but multiple players.”

It doesn’t sound like any players on the roster are safe, which may be a good thing for Hurricanes fans who are hoping to see the team finally try to shake things up.

Waddell made it clear that the team won’t make a change just to make a change. The ‘Canes do have some talent, specifically Skinner and Faulk, but they’ll make sure they’re making intelligent moves that serve the future of the organization. That being said, the Hurricanes can’t afford to stand pat any longer and expect change to magically happen on its own.