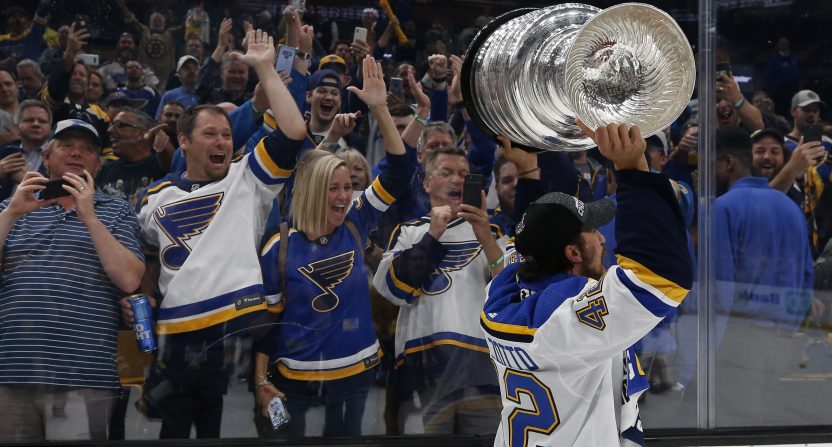 The St. Louis Blues claimed their first-ever Stanley Cup on Wednesday night by defeating the Boston Bruins on the road in a do-or-die Game 7. The win was the first for the Blues in their 52-year history, ending decades of suffering for their dedicated fans. By now, you probably know about the Blues’ worst-to-first story and their lengthy stretch without a championship. You might not know just how crazy this story becomes when you look a bit closer.

The Blues have been called the “Chicago Cubs of the NHL” during their long Stanley Cup drought. While that comparison held some merit, the difference between the Cubs’ lengthy stretch and the Blues’ was the fact the Blues were regularly one of the best regular season teams. They reached the playoffs 25 consecutive times and still walked away without a trophy. They were consistently producing strong teams who looked ready to claim the Stanley Cup, only to fall short.

This year was a very different story, as the Blues started out as one of the worst teams in the NHL. By early January, they were literally the worst team in the league and were one or two losses away from blowing up the roster. Everyone was reportedly on the trading block, from aging veterans and young prospects to the key stars such as Vladimir Tarasenko. That’s about the time Jordan Binnington hit the scene from the bottom of the team’s depth chart (he was their third or fourth option depending when you looked) and the rest is history.

The Blues are the first team in the four major North American sports leagues to win the championship after sitting in last place after a quarter or more of their season.

The @StLouisBlues are the first team from any of the four major North American sports leagues to win a title after placing last place overall in the league standings after one-quarter or more of the season’s games (since 1967-68). #NHLStats #Game7 #StanleyCup pic.twitter.com/1MJkiLTZ2O

Cinderella story? This story was so far-fetched that it makes those Disney classics seem fairly plausible. How else can you explain things like a bar in Philadelphia playing such a key role for the Blues in their Stanley Cup run? Or how Tyler Bozak seemingly predicted this outcome when he signed with the team last summer?

Here is Bozak’s statement from July 2018, via the Players Tribune:

“I know how good the Blues are. They’ve been so hard to play against for years. They’ve got great talent, and even though I was fortunate enough to accomplish some great things in Toronto, I never got the one thing I’ve always really wanted.

That’s why I signed in St. Louis. There’s your headline. Print it.”

It’s also difficult to explain those things that almost feel like destiny. What are the odds that the Blues’ Stanley Cup clinching victory would take place in the same city where Laura Branigan, singer of the team’s victory song “Gloria”, last performed the hit before her untimely death 15 years ago?

No worries. We lastly performed “Gloria” with Laura Branigan in BOSTON 7/16/04 , last time Gloria ever performed live prior to sadly departing us 8/26/04, – so the stage is divinely set for a BLUES WIN GAME 7.

Sometimes no level of analysis or statistics can explain the sports universe. That’s what makes coming back again and again so fun. How do you think Blues fans have survived over 50 years of agony? Relentless optimism in the face of grim circumstances.

The Blues deserved to be buried and long forgotten back in January. Everyone, and we mean everyone, wrote this team off. And for good reason. Yet here we all are serving as witness to one of the most unlikely stories in NHL and sports history. Here’s a city that has long supported a franchise with little-to-no reward over the past 50+ years. Here’s a taste of sweet, sweet redemption.

Maybe Blues forward and St. Louis native Pat Maroon summed everything up the best, via StlToday:

“We did it. I mean, there’s nothing else. I mean, we put everything on the line from January 3 on and we deserve this and what a way to finish it. On the road, where we play great, and all these people, all these media, doubted us all year long and we shoved it right up their ass.”

You can say that again.