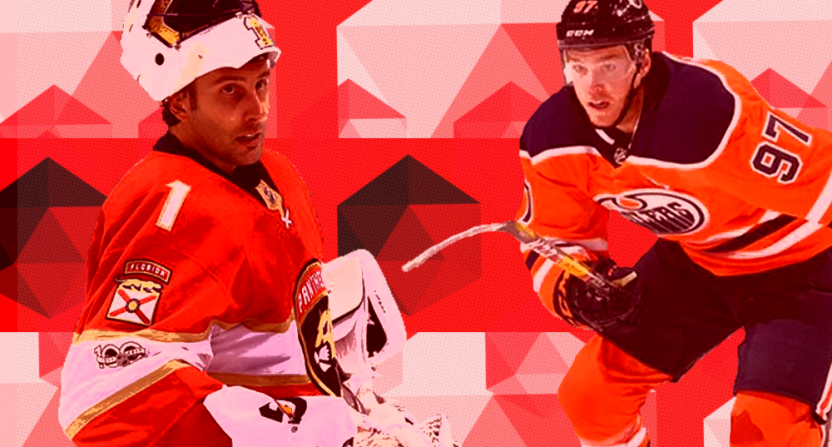 Some NHL teams entered the 2018-19 season with some lofty expectations. While hefty expectations aren’t rare and can be difficult to achieve, four teams have failed so badly that they’re worth highlighting.

Here are the NHL’s biggest letdowns so far this season.

Florida entered the season desperate to make the playoffs after missing out in 2017-18 despite recording 96 points. This year hasn’t been better. The Panthers have taken a big step back by winning just 28 of their first 62 games and sit nine points back of the final Wild Card spot with less than 20 games left to play.

Offensively, Florida has been fine. Center Aleksander Barkov and Jonathan Huberdeau both remain extremely productive, while left winger Mike Hoffman, acquired in an offseason deal with San Jose, is close to hitting 30 goals for the first time in his career. The Panthers’ special teams rank in the top eight in the league, as the power play and penalty kill have clicked. So what gives?

Subpar defensive play and goaltending are holding the Panthers back. Aaron Ekblad and Keith Yandle have carried the defense on both sides of the ice, with the second and third pairs consistently getting buried in shot attempts against. With a porous defense in front of them, Florida’s goaltending has struggled all season. Out of 50 qualified goalies, James Reimer (.902) and Roberto Luongo (.897) rank 37th and 41st in save percentage, respectively. That’s not good enough.

It’s highly unlikely the Panthers qualify for the postseason and they’ve got nobody but themselves to blame. In order to take the next step, addressing the defense should be GM Dale Tallon’s number one priority. This season has been a bit of a write-off.

The Devils were one of the biggest surprises in the NHL in 2017-18 thanks to MVP Taylor Hall and 2017 1st overall pick Nico Hischier leading the charge. The Devils overcame low expectations, won 44 games and qualified for the playoffs. Ultimately, they were bounced from the first round by the Tampa Bay Lightning. But, the team seemed primed to challenge for the playoffs in 2018-19.

The wheels have fallen off as the Devils were hit hard by regression. With a -31 goal differential, the defense hasn’t been up to par. Goalie Keith Kinkaid fell back to earth after winning 26 games in 38 starts. In 2018-19, he won 15 in the same number of starts, with a putrid 3.36 goals against average and .891 save percentage, before he was traded to Columbus. Cory Schneider, once a top goalie in the league, has been just as bad as Kinkaid when healthy. If it wasn’t for rookie MacKenzie Blackwood stepping in between the pipes, New Jersey’s goaltending would be a complete and utter disaster.

The Devils’ scoring woes are more explainable. Hall has been out of action since Christmas. Losing an elite player will sink a fringe playoff team quickly. Without their leading scorer, New Jersey doesn’t have enough firepower or luck to contend. They’re lottery-bound for good reason.

The Anaheim Ducks started the season in promising fashion, going 19-11-5. Amazingly, they imploded in dramatic fashion, winning just five of their next 29 games. That included a 12-game losing streak.

Even with a top-three goaltender in the league, Anaheim couldn’t compete under head coach Randy Carlyle – one of the worst coaches in modern NHL history.  The Ducks were a playoff team last year and appeared to be on the same track this year. Instead, the now-fired Carlyle led the team straight down the toilet. The Ducks’ plus-minus is staggering. In 64 games, they’ve scored the fewest goals in the NHL with 142. With 199 goals allowed, Anaheim possesses the worst goal differential in the league with a -57 marker.

To be fair to the Ducks, they’ve been ravaged by injuries. However, for a squad that’s made the playoffs for six straight seasons before this one, they completely and unexpectedly bottomed out this year. GM (and interim coach) Bob Murray needs to rebuild his expensive, underperforming roster as soon as possible. This group is going nowhere fast.

The Edmonton Oilers are a parody of themselves.

You’d think a team that lucked into Connor McDavid would be somewhat competitive, but thanks to poor roster construction and questionable decisions by former GM Peter Chiarelli, Edmonton is wasting their all-world talent.

After missing the playoffs for the second time in three seasons with McDavid, the Oilers still haven’t figured out how to surround the game’s best player with anything resembling average talent. Edmonton is quite literally the McDavid show. They’ve got little support around him and even with him playing at an elite level, they still can’t crawl out of the NHL’s basement. Despite actively trying to win, the Oilers have won just 26 games and will likely miss the playoffs. That’s unacceptable.

Until Edmonton finds the right person to build a competitive core around McDavid, they’re screwed. Chiarelli did nothing but set the team further back during his tenure. Getting help in almost every aspect – defense, goaltending and secondary scoring – is needed to ensure the Oilers ever make it back to the playoffs. With McDavid, the team should be competing for the Stanley Cup, not missing the playoffs. Figure it out, Edmonton.