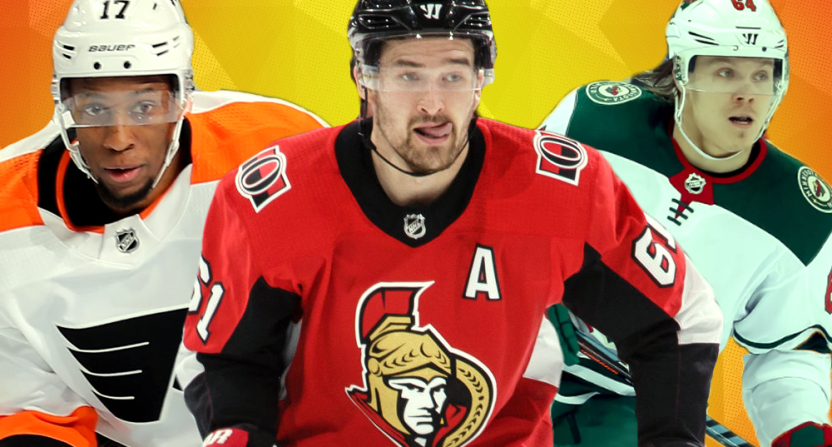 The 2019 NHL trade deadline has come and gone. As the dust settles on what was a fairly busy deadline day, it’s time for everyone to argue about the many trades and make some wild knee-jerk reactions. Overreacting is all part of the fun!

Which teams won deadline day? Which teams are being mocked for their trades or lack of trades? Find out below.

The Predators stocked up at the deadline by bringing in Mikael Granlund from the Minnesota Wild and Wayne Simmonds from the Philadelphia Flyers. The team felt the need to round out their lineup as they battle the Winnipeg Jets for the top of the Central Division and try to stave off the red-hot St. Louis Blues.

The 26-year-old Granlund is streaky (15 goals and 34 assists for 49 total points), but he has the potential to score in bunches for a team looking for more consistent offense. Meanwhile, Simmonds brings an additional net-front presence and physical style of play that could gel well with the Predators’ playoff push.

Of course, the acquisitions had a decent cost. Fan favorite Kevin Fiala will look to rejuvenate his career in a new city after struggling in a big way in 2018-19. Preds fans will also be disappointed to lose Ryan Hartman in the Simmonds deal, especially if Simmonds proves to only be a rental.

Ultimately, the Predators improved on deadline day and may have a roster that is now more suited to pull away in a very crowded Western Conference.

The thriving Calgary Flames have been one of the best stories in 2018-19. They’re leading the Western Conference and are positioned well to make some noise in the playoffs. So, why was their only addition near the trade deadline an insignificant depth play?

Without meaning any offense to Oscar Fantenberg, the lone acquisition for the Flames prior to the deadline, it was surprising to watch the team sit back. The Flames might be confident in the roster they have, but they had to be aware of their competitors stocking up (looking at you, Nashville) around them.

The Flames have missed the playoffs in two of the last three seasons and crashed out in the first round in their most recent appearance. While no one is suggesting they completely sacrifice their future, their inability to improve in any measurable way at the deadline could prove to be a costly mistake.

The Blue Jackets are going for it in 2018-19 and that may be putting things lightly. The Blue Jackets made a series of moves, and they were able to add without sacrificing Artemi Panarin or Sergei Bobrovsky. Now, Matt Duchene, Ryan Dzingel, Adam McQuaid and Keith Kinkaid join the Blue Jackets as they try to not only lock down a playoff spot in the Eastern Conference, but make a deep run for the Stanley Cup.

Jarmo Kekalainen: "I'm not satisfied if we go two rounds or three rounds. I'd be happy if we go four rounds."

This year's deadline moves give the #CBJ a chance — this year and beyond, the GM sayshttps://t.co/2ZEEL9ZUM6

How can a team that was one of the clear winners in terms of overall acquisitions also land in the “Loser” column? By pushing all of your chips to the middle of the table with a record that’s barely in the playoff picture.

The Blue Jackets added a ton of talent and retained a ton of talent ahead of the deadline. That’s the good news. The bad news is they’re sixth in the Eastern Conference and are on the relative edge of missing out on the postseason entirely. That’s not to say they will, but it does make this whole story more interesting when you consider just how severely Columbus mortgaged the future.

The Blue Jackets only have a 3rd round pick and Calgary’s 7th round pick. It would be the least amount of players drafted by a team since 1968 when the draft was only 3 rounds and teams commonly passed. #CBJ

The Golden Knights locked up one of the best all-around talents moved at the deadline in Mark Stone. They did so at a price (Erik Brannstrom, Oscar Lindberg and a second-round pick in 2020) that probably shocked a lot of general managers around the NHL. They then agreed to a deal that will keep Stone around in Vegas for a reported eight years at $9.5 million a year.

With Stone in the mix, the Golden Knights are better suited to claim a playoff spot in the Western Conference. They may not be able to challenge for a top spot in the Pacific Division, but they should (on paper) be more prepared to fend off any rising challengers.

Unfortunately, things took an ugly turn soon after. Zuccarello broke his arm blocking a shot later in that game and may miss the next four weeks. That’s a brutal turn of events, particularly when it’s possible that Zuccarello will elect to test the free agency market this summer.

To Be Determined: Ottawa Senators

It may seem crazy that the Senators land on our list as anything other than losers after dealing an incredible amount of talent away. Yes, losing Matt Duchene and Mark Stone in the same season is a brutal amount of talent to delete from the roster. However, while you can certainly argue that the Senators needed to get better returns in their deals, the list doesn’t look too bad when you take a step back and look at the bigger picture.

OUT: Karlsson, Duchene, Dzingle, and Stone.

That’s not too bad even when you factor in that they should have been able to get more from the Stone trade. It’s also worth noting that the Vegas Golden Knights immediately agreed to an enormous contract with Stone (reportedly eight years with an annual cap hit of $9.5 million) that the Senators would have had a tough time matching.

Chalk this up as a perfect example where time will be the determining factor in how well the Senators did at the 2019 trade deadline.