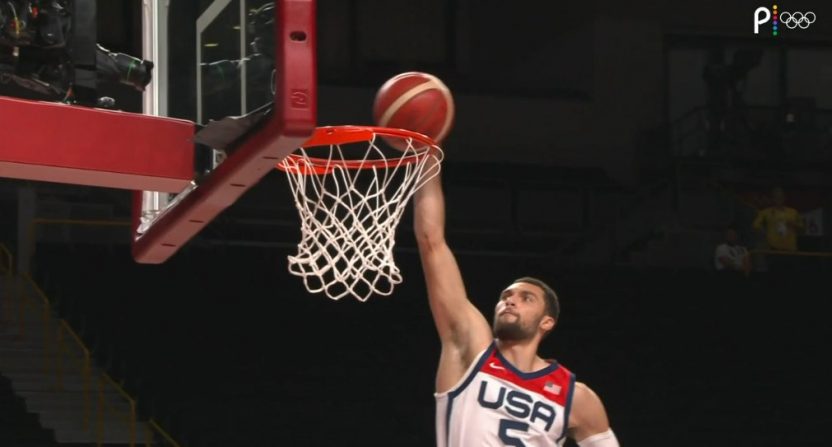 It looked very concerning late into the second quarter, but the Team USA men’s basketball team really turned it on the rest of the way to take down Australia 97-78 in the Tokyo Olympics semifinals.

After Australia — led by Patty Mills, Joe Ingles, and Dante Exum — had a 41-26 lead with just over five minutes remaining in the first half, the USA found themselves down just three points (45-42) at halftime.

And Team USA really took things to another level in the third quarter, with outstanding effort on both sides of the floor to outscore Australia 32-10. After not leading since being up 2-0, the USA finally took the lead — 46-45 — on a Jrue Holiday floater with 8:30 remaining in the third.

Riding the momentum & we’re back on top
pic.twitter.com/u60x3EDfJf

When the quarter ended, Team USA led 74-55. From being down 15 in the second quarter to being up 19 entering the fourth quarter. That’s a game-changing, Olympic-changing swing- and it looked a lot like how the Spain game went for Team USA in the quarterfinals too.

Opposing defenses remain helpless against Kevin Durant, who led the USA with 23 points and nine rebounds in the victory.

Devin Booker scored a very efficient 20 points (7-of-10 from the field, 3-of-5 on threes, 3-of-3 at the line), and Jrue Holiday scored 11 points while dishing out eight assists. Zach LaVine added nine points and two steals, and threw down two impressive dunks in the fourth quarter.

Team USA will now go for the gold, and will need to get by the winner of the Slovenia-France semifinals game to do so. Slovenia features NBA superstar Luka Doncic, while France features plenty of NBAers (such as Rudy Gobert, Evan Fournier, and Nicolas Batum).