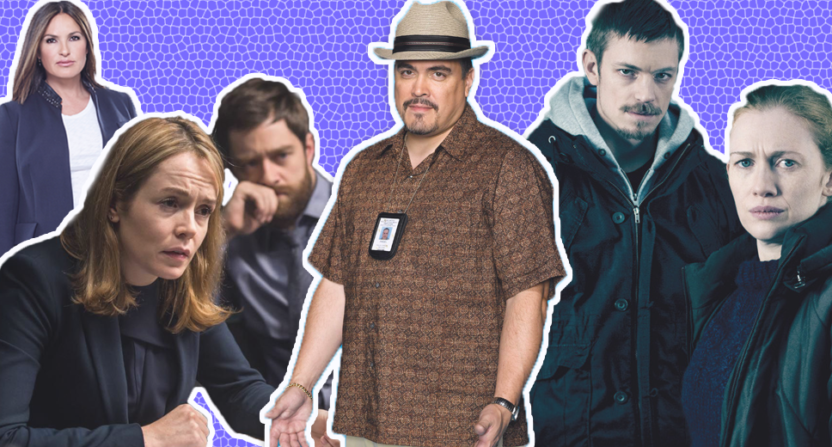 There will be spoilers ahead, you’ve been warned.

The rise of prestige TV has brought with it a slew of new genres for networks and streaming services to play around in. But for every fantasy epic and post-apocalyptic scenario that pops up across HBO, AMC, and Netflix, there are still plenty of shows dabbling in the tried and truest of TV drama formulas: The crime drama.

When in doubt, build a mystery around a dead body in the field, introduce a grieving family, and assign a couple detectives with problems of their own to the case. Shake, stir, and serve over the course of two-to-seven seasons, depending on how good your recipe is.

The problem with the crime drama, however, is that it cannot exist without that second word: drama. We’re not just here to see a mystery get solved. We’re here to see broken people attempt to become whole again. We’re here to watch smart people make dumb mistakes and try to learn from them in time to save the day. That means the cops working the case don’t always do the right thing. Often times, they make things way more difficult for themselves than they need to be. And every so often, they are legitimately terrible at their job.

Here are five recent examples of detectives in an otherwise good show who, when you stop to think about it, probably should have been fired a long time ago.

There’s a theory about Raiders of the Lost Ark that states, “if Indiana Jones had been squashed by that runaway boulder at the beginning of the film, the outcome of the entire story would have been exactly the same.” Even without his interventions, the Nazis still would have found the Ark, transported it to that secret island, opened it, and had their faces melted off. Everything Jones does in the film is ultimately meaningless.

I was reminded of that theory while watching the British series Thirteen, in which Ivy, a 26-year-old woman kidnapped when she was 13, escapes from the man who imprisoned her. While she returns home to a shocked family, she is also at the center of the investigation behind another girl who has apparently been kidnapped to “replace” her. You could make a good case that most of the characters in this show are complete assholes (many of whom spend way too much time wallowing in their own feelings than trying to support Ivy), the award for biggest waste of space goes to the two detectives assigned to the case, D.S. Lisa Merchant (Valene Kane) and D.I. Elliott Carne (Richard Rankin).

We suspend disbelief in these kinds of shows for the sake of drama, but the show seemingly decides to forget that Stockholm Syndrome is an actual thing and that’s when these two numbskulls really shine. Carne becomes way too emotionally invested in Ivy while Merchant assumes from the jump that she’s in on the kidnapping because she’s not being entirely truthful about what happened. While audiences see the mounting evidence as proof that Ivy is psychologically damaged and bonded with her kidnapper, these two dum-dums see it as a sign that she’s a bad person, helping to drive her further over the edge instead of helping her get over the decades-plus of the psychological and physical trauma she’s been through.

In fact, this dynamic duo actually plays no role in the climax of the series, in which Ivy is taken back by her kidnapper but ultimately escapes for good. Merchant ends up in the hospital after a car crash that was easily preventable and Carne costs himself his job because he “cares too much” despite the fact that what he discovers ultimately plays no part in helping Ivy. She would have escaped with or without their help and you could make a strong case the entire situation would have played out much better for everyone if both of those dummies were never involved in the first place.

While technically more of a procedural than a crime drama, Law & Order and its many spinoffs have come to set the tone when it comes to how we perceived law enforcement on television. And while there are so many running tropes in these series that it’d be weird not to see the same events play out over and over at this point.

Still, it’s hard not to notice that many of those common plot points and tropes include some of the worst detective work you’ll ever see in a television program.

Law & Order SVU‘s Olivia Benson might be regarded as one of the best characters in the history of the franchise, but she’s also committed some of the most ludicrous breaches of protocol that anyone can possibly do and somehow not get fired and/or thrown in prison. They include the time Olivia didn’t believe a rape victim because she was drunk, the time she forced a 14-year-old to identify her rapist (who then threw her down a flight of stairs), the time she blamed “the mental health profession” for a patient getting raped, and when she berated the parents of a special needs child because she personally disagreed with their choices.

This is all to say nothing of the many, many times a detective on a Law & Order TV show physically assaulted a suspect, verbally threatened an interview subject, or joked about something getting sexually assaulted in jail if they didn’t cooperate.

It pains me to bring up The Killing as someone who was a defender of the much-maligned mystery show. While most audiences checked out by the time the second season concluded its overly complicated investigation into the murder of Rosie Larsen, I stuck it out for the third season, which was the show’s best by far, and the final season which solidly wrapped up the saga of troubled detectives Sarah Linden and Stephen Holder.

Linden had a lot on her plate (including a stint in the psych ward) and Holder was a recovering addict, so we’re supposed to cut them a little slack. But even with all of that, boy, were the two of them pretty terrible at their jobs sometimes. They broke protocol so many times it’s hard to keep track. They promise loved ones that investigations will be solved quickly without any reason to actually think that’s true. Linden leaves out crime scene photos for her son to see and share with others. They threaten witnesses and potential suspects with violence, even causing one completely innocent man to commit “suicide-by-cop” because of their accusations. For a while, they even spy on one another and undercut each other’s ability to do their jobs.

And all of this is long before they spend the final season of the show attempting to cover up a murder they’re involved in while also trying to play it cool while investigating a separate murder. That is not how being a detective works, guys.

While the audience might be sympathetic to Ambrose’s plight as he senses there’s more than meets the eye concerning Cora (Jessica Biel), it’s entirely within the rights of his partner and superiors to question his tactics and ability to do his job. Especially when he checks a murder suspect (who literally did stab a guy in public dozens of times) out of jail and takes her to various locations, even leaving her free to roam by herself at times. If that’s not breaking basic protocol, what is?

How could we possibly make a list of bad TV detectives and not include the cops who worked alongside a serial killer for years and never seemed to have a clue?

First of all, all due respect to Sargeant James Doakes, the detective who knew in his bones that there was something seriously wrong with blood spatter analyst Dexter Morgan. Doakes eventually figured it out, too, but met his demise all too quickly. R.I.P., Doakes.

As for the rest of you, no quarter should be given to Lt. María LaGuerta, Lt. Angel Batista, forensic scientist Vince Masuka, and Miami Metro PD police official Tom Matthews, all of whom worked with Dexter for what must have been at least a decade without ever realizing he was the Bay Harbor Butcher and had committed dozens of murders beyond even that scope. We can perhaps give partial credit to Detective Joey Quinn, who comes to suspect Dexter of being a killer but ultimately lets him slide as the two do each other a career-saving favor. (On second thought, partial credit rescinded.)

All of which is to say nothing of Debra Morgan who eventually finds out her brother is a serial killer and covers it up. Her character was done dirty by the show in the end but, on the other hand, that is just about the worst thing a detective can do, even if Dexter is only killing “bad people.”

All of this culminates in the final episode of the show, in which Dexter literally kills a guy on camera and STILL gets away with it because the Miami Metro detectives decide this guy who has been surrounded by murder for as long as they’ve known him probably didn’t mean it.