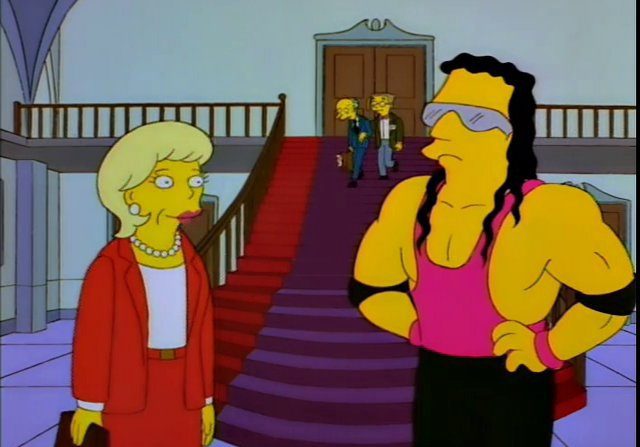 Not too long ago we were reminded just how much Bret “The Hitman” Hart likes The Simpsons. Hart taunted wrestlers Brock Lesnar and Ric Flair with a brief internet video using his love for The Simpsons as his ammo, which brought back one of many classic guest appearances on the show back to our attention.

”Hey Brock Lesnar, ya got one of these?”

THE GREATEST OF ALL TIME pic.twitter.com/JLzdr3tZIh

But did you ever watch that particular clip from The Simpsons and think there was something off about the animated portrayal of Bret Hart even though he provided the voice for the character? Watch the clip again, this time with a little more footage…

It turns out there is a perfectly reasonable explanation for it, and that is because the people at The Simpsons were a bit clueless about pro wrestling at the time. Hart was asked about the guest appearance he made on The Simpsons by The A.V. Club back in 2009 (but that was before Twitter really took off so does it really count?), and Hart said he was initially brought in to provide the voice of a fictional Russian wrestler. It wasn’t until after Hart was done recording his voice for his few lines that someone from The Simpsons stumbled into just how big a star they had in their recording studio.

They approached me about doing a voice as a wrestler, but not Bret Hart. It was the Mad Russian or something. I said, “I don’t want to be the Mad Russian, I want to be Bret ‘The Hitman’ Hart!” We went back and forth for a while and they eventually said, very politely, “This is the way it’s written, take it or leave it.” I agreed, and flew down to FOX Studios. They had blocked off this huge chunk of time for my three lines, and were saying things like, “We need you more mad,” “Okay, not quite that mad!” I did my lines about 100 times in two minutes! I went outside to wait for my limo that had gone to get gas, and I signed autographs and took pictures for 45 minutes. The guy that was in charge of my episode came up to me and said, “I had no idea you were this big of a star! If we haven’t already started the artwork, we’re going to draw you in as yourself.” That’s why the voice doesn’t really sound like me, because I thought I was playing a crazy Russian!

It’s actually kind of interesting how The Simpsons has historically stayed away from having professional wrestlers on the show. To date, Bret Hart is the only wrestler to appear on the show as himself, even if the character was not a more accurate cartoon of his in-ring persona. Maybe that’s just because the people at FOX working on The Simpsons are about as clueless as you can get when it comes to professional wrestling.