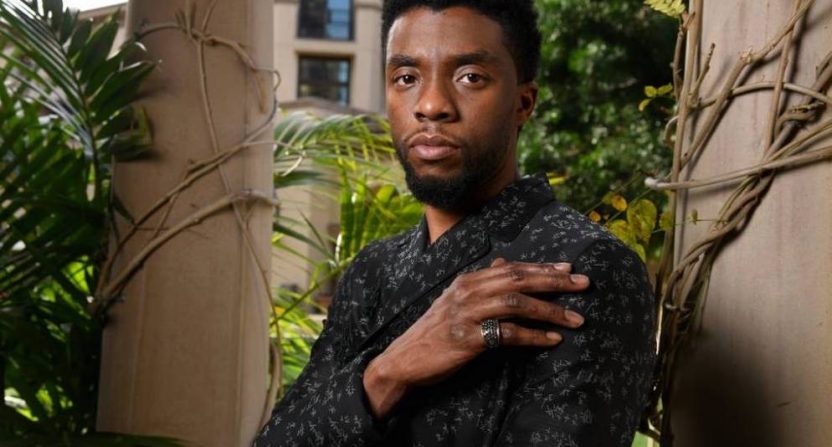 During a year full of anxiety, suffering, and tragedy, the shocking news that actor Chadwick Boseman passed away on Friday seemed particularly cruel. For Boseman to have died on the same day Major League Baseball was honoring Jackie Robinson felt like the meanest joke.

Boseman began his path to movie stardom and cultural importance by portraying Robinson in the film 42. Playing a sports and civil rights icon surely created a lot of pressure for the actor. For the film to be a success, he had to get it right. He had to bring Jackie Robinson to life for modern audiences.

The role also carried major importance for Boseman’s career. It could’ve been the difference between getting lead roles, being a movie star, or being a “working actor” with a resume full of supporting parts and vague, “oh yeah, that guy” recognition.

As we know, Boseman hit the proverbial home run with 42. He conveyed Robinson’s fierce stoicism as the first Black player in baseball’s major leagues, a man who famously kept his composure and turned the other way when confronted with racist cruelty on and off the field. Had he given in and fought back, any progress would’ve been ruined.

Boseman showed the private side of the icon never captured by news cameras. He depicted the rage Robinson held inside, the anger and pain that had to be released when no one was watching. Yet his performance also showed the joy and charm that made him such an appealing figure, a man won over teammates, rivals, media, and fans under circumstances that would’ve compelled so many others to walk away.

It was an ideal tribute to a man admired and loved within sports and culture. Seven years after 42 was in theaters, Boseman’s portrayal and the movie hold up wonderfully. He did it.

And in turn, Boseman’s career took off. Draft Day may be a generally forgettable sports movie, but plenty of fans remember him as NFL Draft prospect Vontae Mack (with maybe the coolest smartphone case ever).

In Get On Up, he played James Brown, a role that many other actors would’ve avoided. The image of James Brown is so clear, from his music to footage of his performances. Yet Boseman again embodied a cultural icon on screen, making viewers forget that they were watching an actor portray a world-famous musician and stage performer.

He became James Brown in a movie that wasn’t very good, yet was unafraid to show that the singer wasn’t an inspirational figure. Boseman’s charisma, with a mischievous sparkle in his eyes, still makes the film compelling. The sheer physicality of playing Brown on stage — he did all the dancing and even some of the singing — is impressive.

Then Boseman took the next step which made him an international superstar: He became a superhero. As King T’Challa in Marvel’s Black Panther, Boseman won the role of the definitive Black superhero in comic book mythology. Debuting in 1966, Black Panther was the first Black superhero. And as comic book heroes dominated the movie landscape, Marvel finally made a blockbuster film built around a culturally meaningful figure.

Related: Black Panther is like no other Marvel film, reaching a higher bar as a result – 5 takeaways

As the first major superhero movie featuring a Black character, Black Panther was an important film. T’Challa wasn’t just someone who fought bad guys in a costume. He was a king, a warrior; the staggeringly intelligent and courageous leader of an African nation that hid its scientific and technological innovations from the rest of the world.

In the Marvel cinematic universe, Black Panther was equal to Captain America and Iron Man. In the Marvel movie mythology, T’Challa and his kingdom of Wakanda led the fight against the evil force attempting to take over the galaxy.

Black Panther became a worldwide phenomenon, celebrating African ideology, reaching a previously underserved audience, and resonating within pop culture. The slogan “Wakanda Forever,” symbolized by T’Challa crossing his arms over his chest to form a “W” was a statement.

Musicians, artists, writers, actors, and filmmakers celebrated the breakthrough. Athletes typically idolized for their feats and cultural influence turned into adoring fans themselves. (And they paid tribute to Boseman after news of his death went public.)

You helped a grown man like myself dream like a 3 year old kid again. The superhero in us never quite leaves. We just suppress that imagination because reality takes precedence over our lives. Thank you for your sacrifice. I could only imagine the pain you went through but in the midst of adversity, you put others before yourself. I know you are way more than your work, but thank you for bringing out that little kid in me. “I think you realize how much you need to have people that you love. It’s not as much about them loving you – it’s about you needing to love people.” Chadwick Boseman

LeBron paid tribute to Chadwick Boseman prior to tonight's game.

The film made Boseman a superstar. But he didn’t just bask in a higher profile and look for the biggest paydays. After he was cast as Black Panther and made his debut as the character in Captain America: Civil War, Boseman also starred in another biopic, playing lawyer, civil rights activist, and Supreme Court Justice Thurgood Marshall.

Most importantly, he took the responsibility of being a hero to younger generations seriously, making sure he was a role model.

The revelation that Boseman had been diagnosed with colon cancer in 2016 provides a heartbreaking undertone to that community outreach. (Unfortunately, it also confirmed the worst fears of those concerned about Boseman’s gaunt appearance this past April 15, Jackie Robinson Day.) He visited the childhood cancer patients shown above as a fellow cancer patient himself, going through that same struggle yet demonstrating strength to them. It also makes his achievements that much more impressive.

Boseman played King T’Challa in Black Panther — and later Avengers: Infinity War and Avengers: Endgame — in the demanding action and dramatic scenes that those films required while living with cancer, while undergoing chemotherapy treatments for the disease. Obviously, the same was true for roles in 21 Bridges, a movie that needed Boseman’s star power to carry it, and Da 5 Bloods, a film elevated by his cameo performance.

This is what makes Boseman’s death feel even sadder. He was far too young, at 43 years old, to die. But he was in his professional prime, playing superstar roles but also using that large profile to get roles and carry films that benefited from his presence.

And he willingly shouldered his influence. During a time of deep tensions over racial injustice and violence, and heightened awareness of systemic racism, Boseman was an important voice in the culture. He had so much more to offer, so much more to accomplish. His passing is a tremendous loss to our culture.

Saw these on Facebook. Kids paying a tribute to their fallen superhero ❤❤❤🙏🏾 pic.twitter.com/lm1LpdWu1s

MY BABY BOY AND THE AVENGERS HOLDING A MEMORIAL FOR BLACK PANTHER❤💪🏾#Wakanda4Ever pic.twitter.com/nYAnER23Ig

But the mourning of his death throughout culture — across entertainment, sports, and general public awareness — demonstrates what an impact he had in a very short time. 42 was released in 2013, Black Panther in 2018. For many, it takes far longer to create such an important footprint. And that is what is being celebrated with Boseman’s passing.