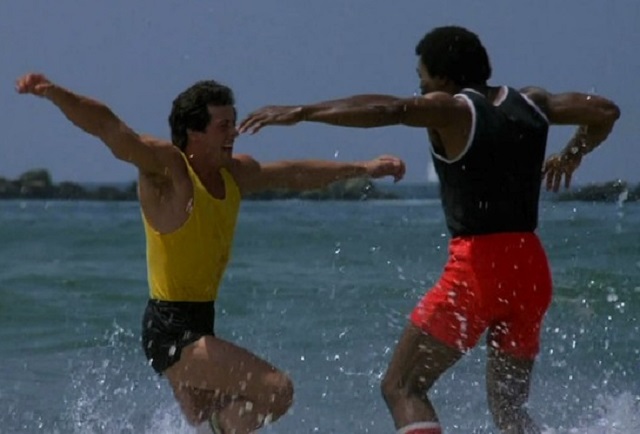 Given its critical and box office success, a sequel to Creed was likely to happen. The story of Apollo Creed’s son chasing his father’s boxing legacy and training with Rocky Balboa ended with the promise of future visits with those characters.

But after earning more than $100 million at the box office since its Nov. 25 release (profiting nicely against a $35 million budget), another Creed movie is inevitable. The head of MGM, the studio which produced the film, confirmed that.

“There’s no doubt that we’re making a ‘Creed 2,'” MGM CEO Gary Barber told Variety‘s Ramin Setoodeh. Obviously, Mr. Barber wants to capitalize on the movie’s success. He’s a businessman, after all. And right now, Creed looks like good business for the studio. It’s not like there’s a big market for Adonis Creed toys, cartoons and apparel. So that means another movie.

Nearly as eager to get a Creed sequel rolling is Sylvester Stallone, who may have experienced a career revival with his impressive performance in the film. Reprising his most famous role, portraying a heroic boxer who’s lost virtually everything and carries that pain with him, was a revelation — especially to those who thought Stallone was mostly a meathead action star still trading in on his 1980s fame. But Stallone earned a Golden Globe nomination and might score an Oscar nod when those honors are announced on Jan. 14.

“I actually am startled,” Stallone said in an interview with Setoodeh. “It’s a character that I love and never thought I’d play again. I didn’t think it would resonate like it did, especially with a newer generation. I never went into the film thinking this is going to be a transformative performance. I just thought Rocky has a lot of issues, a lot of problems. He’s like all of us.”

But while rubbing his hands and thinking of continuing the story of young Creed and an older Rocky, Stallone may be forgetting why so many viewers enjoyed his performance in Creed. It was like a reunion with an old friend. We saw that the character had grown and changed. He was no longer the superheroic figure we saw in Rocky III and Rocky IV. He had come to terms with the end of his boxing career that was depicted in Rocky Balboa. Stallone portrayed that wonderfully, which was a major reason why Creed resonated. Many of us had aged along with him.

However, that doesn’t necessarily mean fans want more Rocky. Or to get the 1980s band back together and go back into the past to revisit Rocky and his adversary/friend Apollo Creed. Yet it sounds like that’s one of the ideas currently being considered by Stallone and Creed director Ryan Coogler, who also wrote the film.

“One version of the story would take place in the past, which would mean — in a surprise that would energize the franchise’s fans — bringing back Carl Weathers to play Apollo Creed, who died in 1985’s ‘Rocky IV.’ ‘Ryan has some ideas of going forward and backward and actually seeing Rocky and Apollo together,’ Stallone revealed. ‘Think of ‘The Godfather 2.’ That’s what he was thinking of, which was kind of ambitious.’ Stallone said he’d recently bumped into Weathers, who looked like he was still in good shape. “I can’t believe I got in the ring with him,” he says. ‘Even if it was play fighting.'”

Yes, there are some fans that would love to see Rocky and Apollo together again, whether it’s fighting, training or some glimpse at their lives, perhaps between Rocky III and Rocky IV, when their friendship likely grew. But we’ve already seen that relationship play out over the course of the first four Rocky films. And really, that story ended wonderfully at the close of Rocky III, a moment that was alluded to in Creed when Adonis met Rocky for the first time.

OK, that story truly ended when Apollo suffered a fatal defeat at the hands (fists) of Ivan Drago. And that death is the driving force behind the narrative and main character of Creed. We see brief reminders of Apollo when his son shadow-boxes to YouTube clips of his fights, along with a photo from the first Balboa-Creed match that Rocky hangs in his restaurant. But doesn’t the character work enough as a presence, someone whose spirit stays with his son and friend, rather than seeing him come to life (even if it’s in the past) again?

That’s not even considering that Stallone is 69 years old and Carl Weathers is 67. Obviously, the two actors are still in tremendous shape. But creating new scenes with Rocky and Apollo would require some significant digital effects work to de-age those characters.

Yes, Marvel Studios, director Peyton Reed and Lola VFX took 30 years off Michael Douglas’ face in Ant-Man, and did a surprisingly good job of making him look young again. Yet that scene comprised the opening minutes of the film. How much of Rocky and Apollo would we see in a Creed sequel? Would these just be brief flashbacks? Wouldn’t they have to be? Especially if MGM wants to keep the movie around that original $35 million budget?

Then there’s the other story being considered, which sounds more like Stallone’s idea than Coogler’s:

“Another option would be a linear story with Apollo’s son Adonis (Michael B. Jordan) taking on another challenger. ‘You’ll have him face a different opponent, which I would say is a more ferocious, big Russian,’ Stallone says. ‘You can start to meld my experiences and then you start to bring different cultures into it. And you can see what’s happening with the Russians today in America.'”

Frankly, that sounds like a terrible idea. Fighting the Cold War in the ring was appropriate in 1985 for Rocky IV, but those days are over. Maybe there’s story material to be found in the United States’ current relationship with Russia and Vladimir Putin, but Russians don’t make easy villains like they did with Ivan Drago or Nikolai Volkoff and Ivan Koloff in professional wrestling.

Besides, doesn’t that proposal just sound like a remake of Rocky IV, a movie which got so far from the original premise of the Rocky Balboa story — essentially making him an international superhero — that the character and the movie series became a caricature? Creed succeeded because it was anything but a cartoon. Coogler and Jordan (along with Stallone) created a down-to-earth story that had real-world authenticity to it, even if Adonis went to London to fight the world light heavyweight champion.

But maybe Stallone and Coogler have something a bit more nuanced in mind, mentioning that Adonis’ girlfriend Bianca (played by Tessa Thompson) could be a big part of the story, with a stronger influence on the narrative than Rocky’s wife Adrian ever had. She has her own career ambitions and time is running out on fulfilling those dreams because of her progressive hearing loss. That sounds more interesting than Creed fighting a big Russian.

Coming up with an equally compelling story for Adonis Creed isn’t going to be easy. And even if he writes (or co-writes) the script, Coogler is likely to be too busy to make a Creed sequel if rumors of him directing Marvel’s Black Panther film become official. That could leave the project in Stallone’s hands, and though his talents as a writer, director and actor are to be admired, his storytelling instincts have not always been the strongest. (Look at what became of the Rocky saga.)

Returning to the character and mythology with fresh eyes and coming up with a new angle is what revitalized the franchise. Stallone and MGM need to remember that.