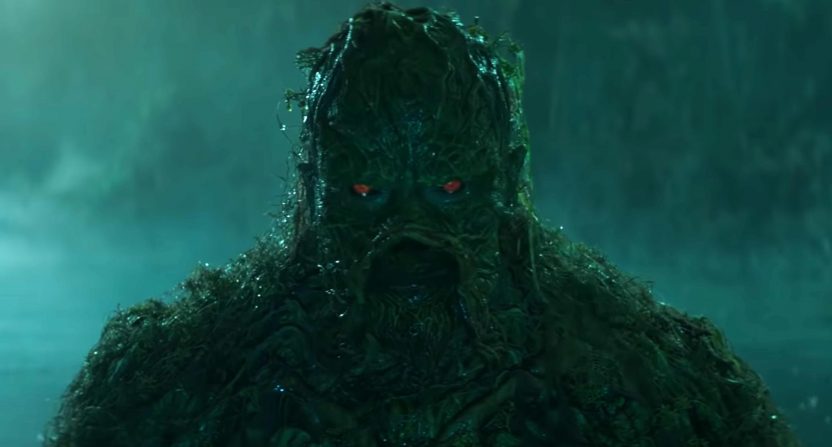 Swamp Thing has emerged from the depths and is ready to scare you.

On Friday, the third original live-action series launches on DC Universe and drops on the DC Comics streaming service. Based on the classic supernatural DC Comic of the same name, Swamp Thing does not shy away from its comic book roots.

Based on the character created by Len Wein and Bernie Wrightson and later re-popularized by Alan Moore, the show follows Abby Arcane (Crystal Reed), a CDC agent specializing in dangerous viruses and diseases. When she is called to her hometown in Houma, Louisiana to investigate a strange swamp-borne virus which has had a lethal impact around the town, Abby meets Alec Holland (Andy Bean), a rogue biologist living in the bayous researching the surrounding viral and biological impact of the toxin.

Both leads in Swamp Thing are desperately trying to move forward in their lives. Holland – who later is transformed into a monster – is a disgraced scientist who fabricated and manipulated past scientific findings – he claims he was unable to replicate results and fudged his results. Arcane is returning to a home that is not exactly welcoming towards her, thanks to killing her best friend as a teenager.

Swamp Thing is a straight horror-drama. It is incredibly well-acted and has a surprising amount of strong character work throughout. Reed excels as Arcane, an intuitive, brilliant scientist whose past in Houma clearly haunts her. Meanwhile, Bean brings charm and charisma as Holland, while deftly adding the necessary pathos of a fractured man. The duos immediate chemistry is a highlight of the show.

The actual Swamp Thing monster looks right out a comic book. Just the small glimpses of Derek Mears in costume showcases one of DC’s best live-action interpretations of how a character looks across movies and TV. The vines and small details really bring the monster to life.

Swamp Thing is not for the faint of heart, nor does it waste any time getting gory. In the opening scene of episode one, a group of hired boatmen encounters a raging presence in the water. As the surrounding green pulses and moves around them, (spoiler alert) they are attacked, and vines rip through their boat and bursts through the chest of one of the crew like the chestburster scene in Alien.

The direction by Len Wiseman (Underworld, Live Free or Die Hard) is also a standout. The town of Houma feels lived-in and ready to explore. The scenes in the swamp, which could come across as muddied, are dark yet affecting. There is plenty of tension and gore thanks to incredible special effects and performances. Wiseman deserves credit for bringing a character not exactly fit for live action to life.

The first episode of Swamp Thing sets a dark, frightening tone with characters you care about from the drop and immediately has you wanting more. Like Titans and Doom Patrol before it, DC Universe has really done a stellar job in creating an intriguing, unique series grounded in personal identity. By embracing the characters horror roots and casting the characters flawlessly, DC has another hit series on their hands. Swamp Thing is a welcome change of pace to a crowded superhero genre.