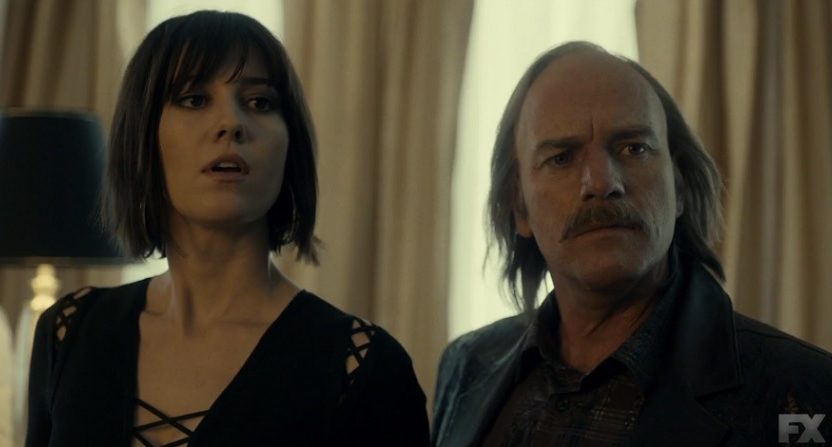 Season three of Fargo opens with a shot that might make you think you tuned in for the wrong show. It looks like something from a Tron movie as the camera moves through the interior of a speaker (or microphone?) to an office in East Berlin.

It’s 1988, and a suspect is being questioned about a murder that took place in the apartment where he currently lives. But the man insists he’s not who the police says he is. He has a different name. However, the victim shares a first name with his wife. The policeman is convinced he has the right guy and the suspect is lying. And he might be lying. Are his snow-soaked feet, dripping water into a nearby drain, a sign of his guilt?

What does any of this have to do with the rest of the episode? Seemingly nothing. It may have a connection or corollary to the season to come. Or maybe it won’t, and it’s just one of those weird, Coen Brothers-esque touches that Noah Hawley has tapped into so brilliantly for his TV show that has gone far beyond the 1996 movie which inspired it. At the very least, the prologue and the episode which follows share two things in common. Both stories take place in a cold, snowy setting. And each of them turn on a case of mistaken identity (presumably, in the case of Yuri Gurka in East Berlin).

The important thing is that Hawley has earned our trust. Fargo has been so good in its first two seasons that we’re willing to follow whatever story he creates anywhere it chooses to go. Like when a UFO showed up at the end of season two. Sure, OK. It’s just that kind of world, where some things maybe don’t have to be explained, yet add something quirky and charming to the proceedings.

What Fargo is really about — whether it’s the movie or TV series — is people either trying to commit or unwittingly pulled into crimes that completely disrupt their lives and the simple, Midwestern communities in which they live. Either they have no idea what they’re doing because they’re not criminals, arguably good people who suddenly do bad things (perhaps revealing a latent inner darkness), or they’re dimwits who are incapable of getting away with the scheme they’re trying to plan.

The latter seems to apply to this story, notably to Ray Stussy (Ewan McGregor), a shady parole officer who’s met a woman way out of his league and wants to give her what he thinks she deserves. He wants to buy Nikki (Mary Elizabeth Winstead) a ring and get married. But Ray can’t afford the kind of ring he wants to give Nikki, so he tries to borrow money from his affluent brother Emmit (also Ewan McGregor), a successful businessman in town. This clearly isn’t the first time Ray has tried to borrow money from his brother, as the disapproving sneer from Emmit’s lawyer, Sy (Michael Stuhlbarg), indicates.

What Ray doesn’t know is that Emmit has his own financial issues to deal with. It’s 2010, and Emmit was likely hit hard in the economic crisis of 2008 caused by the cratering of the real estate market. He had to take out a loan, but no bank would front him the money he needed — at least in the amount he needed. So Emmit and Sy sought other means to get the $1 million necessary to keep his business afloat. But he apparently took out the loan from a criminal enterprise. Emmit is ready to pay the money back (with interest), having saved his company, but the broker doesn’t want the payment. As explained by a creepy representative (David Thewlis), the $1 million was “an investment,” intended to save a business that could be used to hide criminal money. 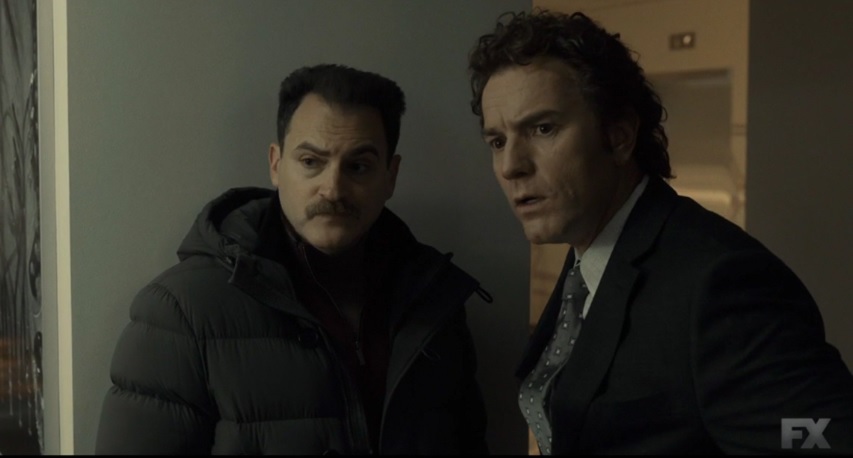 With other more pressing concerns, Emmit tells Ray “it’s not a good time.” Ray isn’t happy about that, figuring he’s owed money that belongs to their family. The stamps that their father gave to Emmit are apparently quite valuable and could provide Ray the money he needs to buy Nikki’s ring. So with Emmit refusing to give his brother any money, Ray decides to take it for himself. Being a parole officer, he knows the petty crook that could get the stamp for him and blackmails Maurice (Scoot McNairy) into helping him. Maurice failed a drug test, which would violate his parole. But if he helps Ray, those test results won’t be reported.

Maurice agrees to the robbery, but Ray probably should have chosen his thief a bit more carefully. Given Emmit’s address, the job seems like a simple one. But Maurice is smoking a joint while driving to the house, opens his window to flick the butt out, and the note with the address flies out of the car. Maurice is already operating at less than full capacity, but he has no chance of finding the note at night along a snowy roadside (even if the camera tells us that he wasn’t that far away from where the note landed). But Maurice figures he’s remembered enough from the note to pull off the job. He’s got the last name (Stussy) and the town where he lives. Or at least part of it. He recalls “Eden,” but goes to Eden Valley when he sees a road sign instead of driving to Eden Prairie. A page ripped out of the phone book gives him the address he needs.

That introduces us to Gloria Burgle (Carrie Coon), an officer who used to be the chief of police in Eden Prairie, but her position is being eliminated after merging with another department. Like Molly Solverson in season one and season two’s Lou Solverson, Gloria may be a small-town police officer, but has the instincts of a good cop and is far tougher than she looks, as we see when she’s comfortably toting a shotgun toward the end of the episode. 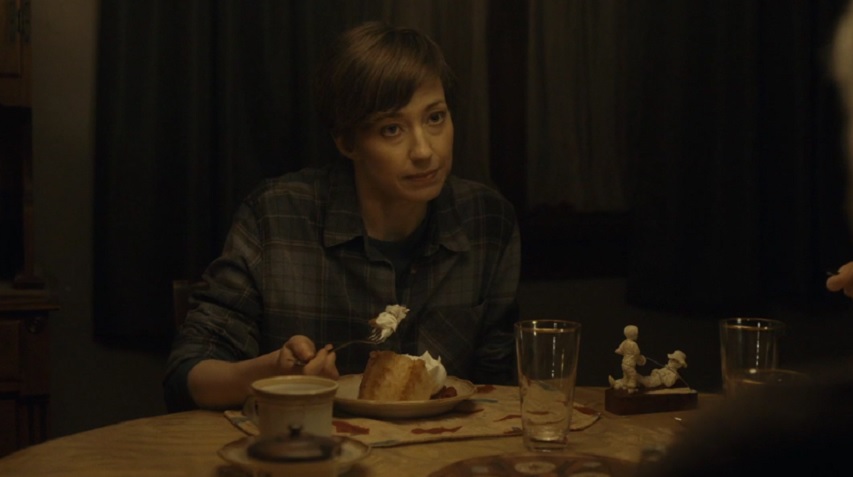 We don’t get to see much of Gloria in this first episode, but she has a crucial connection to the story. Her stepfather has the misfortune of having the last name “Stussy,” and his address is the one Maurice finds in the phone book. So when we see headlights glare into that old house’s window, it’s a sign of bad things to come. Gloria and her son had already left the house for the evening, but circle back after the kid remembers that he left the model that the old man carved for his birthday back at his house. Upon returning to the house, Gloria sees that the front door is ajar and knows something is wrong right away. That suspicion is confirmed by the messy conditions inside and her dead stepfather sitting alone in the kitchen. Her policeman instincts kick in and she knows that the intruder was looking for something. But what?

As the episode reaches its end, Maurice finds Ray to tell him that the job is done, but wasn’t what he expected. As Maurice describes the situation that doesn’t sound familiar to Ray, he realizes that the thief hit the wrong house and the wrong Stussy (Ennis, not Emmit). But Maurice got some stamps (though not THE stamp) and wants to be paid for his work. And if Ray doesn’t pay up, there’s going to be a whole lot of trouble. Nikki then reveals herself as the smarter of the pair, initially trying to distract Maurice by getting out of the bathtub naked. Eventually, however, she counts out how long it takes someone to descend the stairs and walk out the front door, timing that perfectly with pushing her air conditioner out of the window and onto poor Maurice’s head — like an anvil hitting Wile E. Coyote.

Though Nikki and Ray surely believe that the accident scene they created ends the story, it’s obviously only the beginning of what looks to be yet another compelling story in this series. Gloria will investigate the murder of her stepfather. Ray will almost certainly continue to look for getting the money to pay for Nikki’s ring. Emmit’s criminal dealings will become a significant problem that could lead to scandal. And Gloria and Nikki may be the smartest two in this whole bunch. Will that be the final confrontation that brings this story to something resembling resolution? Away we go with Fargo season three.