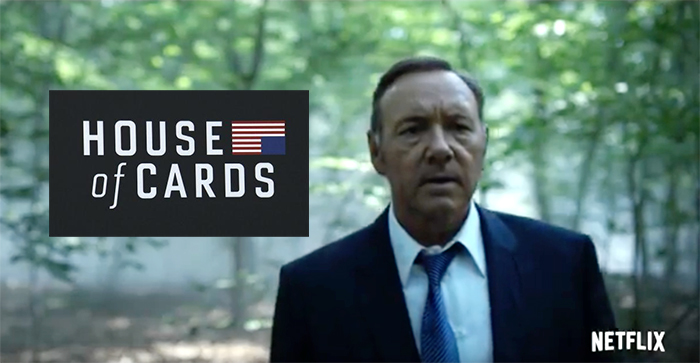 “You have no idea what it means to have nothing.”

“You don’t value what we have achieved. I have had to fight for everything my entire life.”

That’s how the trailer to season four of House of Cards begins, and it’s hard to tell if those lines are directed by President Frank Underwood to his wife and First Lady, Claire, or to the audience.

You don’t value what we have achieved.

If that’s not evident in every scene of Netflix’s tentpole original drama, nothing is. The first 39 episodes of House of Cards, spread across three seasons that began in February, 2013, have been about proving to the audience, directly, the value of Frank Underwood, both as a politician and as the show’s lead.

Without Underwood—really, without Kevin Spacey in the role of Underwood—the show wouldn’t exist. You can’t play chess with a king and all pawns, but that’s the board that House of Cards has set for viewers over the last three seasons, and what looks to be the set up for the fourth as well.

Sure, season three realized some of the faults of the previous two—and there were many, many faults in watching a middling congressman dupe all of Washington into making him the President without so much as one vote being cast on his behalf. Underwood’s ascension to America’s political throne would have seemed implausible if House of Cards were a sit-com about the First Family, trying to make things work after being thrown into the White House while hilarity ensues. Only with House of Cards set as a prestige drama, the only people laughing were the viewers, at just how stupid everyone in the Underwood Universe seemed to be.

“Golly, Frank, I’ll gladly help you become the President as long as you don’t expose all of my skeletons and ruin my life and career in the process.”

“Let me think about it…No.” (Followed by a fourth-wall breaking soliloquy about how stupid everyone is but him, reaffirming exactly what we just saw.)

“Welp, I tried. But I guess I’ll help you anyway. Oh, is there anyone you’d like me to murder, or will you personally be handling all the murdering this year?” (Followed by a stare into the camera and a smirk. Rinse. Repeat.)

Season three attempted to ground the show back a little bit from the ridiculousness of throwing a journalist in front of a train or asphyxiating a congressman in his own car or— what other murders am I forgetting—by giving Underwood a real political rival, albeit a thin parodied version of Vladimir Putin. At least it was something, and a better storyline than the President raiding the coffers of FEMA to create a jobs program in Washington D.C., one of the most ludicrous multi-episode arcs in the show’s very ludicrous political life. 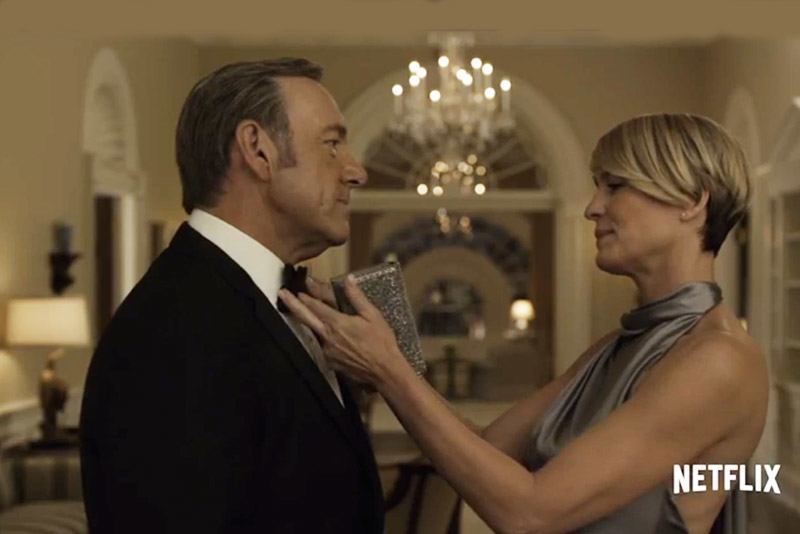 It’s not that Wright is bad in the role, or that Spacey is either, it’s that neither of their characters are in any way redeemable or likeable or, in very different ways, human that the show suffers because of its consistent reliance on the two of them and almost no one else.

Every other character is better than the Underwoods, despite their one-dimensional views of Frank’s New World. And yet, as the show finally seemed to figure that out, giving multiple episodes to the recovery and ultimate relapse of Doug Stamper, Underwood’s right hand man (and de facto murder guy) played by Michael Kelly, season three ended the way viewers should have expected. No, not with another ridiculous and unnecessary murder (but yeah, that totally happened) but with the show grinding in its gears and becoming solely about Frank and Claire, once again.

In the middle of his POTUS campaign, Frank shows just how vile and villainous he can be, daring Claire to do something about how evil he is as he’s physically abusing her. So she threatens to leave him, and the show just…ends.

Season four, like it or not, will double down on the Underwood relationship, and viewers are left hoping that maybe this season will end with both of them being the ones unnecessarily murdered in ridiculous fashion so the rest of the characters can get out of this over-sensationalized trap.

By the looks of the drum beat trailer for the new season of House of Cards—the last with the original show runner Beau Willimon, though a fifth has already been announced and if people binge on this season like they have others in the past, surely season five won’t be the last for the show—there’s a new candidate for Francis Underwood to contend with, one who takes selfies with young voters and is going to turn the never-elected-but-always-has-the-votes incumbent President into an old fuddy-duddy, and nobody makes ol’ Frank look like, well, Old Frank without probably being murdered.

Seriously, in a one-minute clip there are about five people who look like they are either going to get murdered or are trying to kill themselves. One guy has a glass held over his mouth while his nose is being pinched. This is a prestige drama about politics, yes?

Well, no. It was never about politics in the truest sense. House of Cards was about indulgence, and how far they, and we, could take it. From the first episode of the first season, the show rested solely on the shoulders of Spacey’s interpretation of Washington insiders, as we watched a meager career politician who had bigger aspirations than being a South Carolina congressman and House whip turn into the ruler of the free world.

It’s surprising, then, that season four doesn’t see Underwood go into outer space—he’s the President, after all, so he can surely hop about any space craft he likes—to join the intergalactic governing council without an invitation, and then take over that group before—or maybe after—murdering its leader.

Or will that be season five?

“I saw a future. Our future,” Claire says during the Netflix trailer for season four, available on March 4, by the way.

“We had a future until you started destroying it,” Francis quips back, again, leaving viewers unsure if he’s speaking to his wife or to those who review the show.

Here’s what else the season four trailer tells us. The Underwoods have split up, at least in private, and it looks like Claire is packing a gun. Jackie Sharp, played by Molly Parker, seems to have left her husband she married just because Underwood made her run for President so he could actually…be…the…one…running…for…President, or at least she’s cheating on him with Remy Danton, played by Mahershala Ali, who quit the White House in season 3 and is going back to being a friendly foe of Underwood, it seems, for this year. Or he’ll be the one murdered. Who even knows.

Neve Campbell shows up as either Claire’s chief of staff (maybe she’s running for President and I seriously wouldn’t put it past her or the show) or her divorce attorney, and Ellen Burnstyn too, who looks just like Claire but wrinklier, so maybe that’s Claire’s mother. There’s a safety deposit box and a brief case full of cash and papers with names on them which probably means someone is about to commit voter fraud—and if it’s Underwood, totally get away with it, probably by murdering someone—then the selfies (above) and press conferences and some party where people fall to the ground which means someone is shooting up the joint and Frank does his knuckle knock while people make out on a couch and then Claire picks up a phone with a red light—wait, is she Batman? Is she sleeping with Batman? Will Batman get murdered?—a black church, Doug walking, someone having a seizure in the hospital and then EW GROSS BLOOD COMING OUT OF THE FAUCET SEE I KNEW THERE WAS MURDER ON THE WAY.

Then comes the nose pinchy murder attempt and then whatever the hell this guy is doing.

Then crying and Russian kissing and a lady in a short white dress we’re to assume is Claire because earlier she was in a white dress straddling the president on his couch, then this—see the white dress in the reflection—which probably hurt like hell.

Then a boy with a gun in his mouth, Doug smashing a bathroom stall and the Underwoods—always the Underwoods—giving blank stares while Spacey and Wright squeeze every bit of human emotion out of two utterly lifeless characters.

If House of Cards were in on the joke, it would be one thing, but the fact the show holds itself in such esteem while being so utterly ridiculous has been problematic, and something not easy to change on the fly. It’s unlikely the show will be anything other than what it’s been so far, which is a drama that is beautifully shot, wonderfully set, and respectfully detailed, especially for a show that started the Netflix boon no one was quite sure would be as important to the industry as it has been. House of Cards, at this point, will be what it is, a big show with a wonderful supporting cast that’s ultimately wasted in the soulless, ridiculous world of the Underwoods.