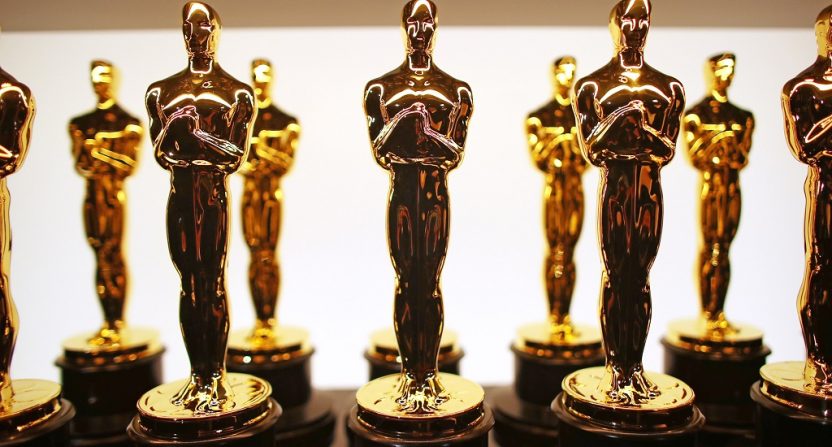 So, you’ve decided to watch the Oscars. Congratulations!

Welcome to the Academy Awards that nobody wanted to host. For the first time since 1989, the ceremony will be bereft of a master of ceremonies. The list of people who reportedly turned this high-profile gig down is fascinating: Justin Timberlake (nope), Dwayne ‘The Rock’ Johnson (nah), Kevin Hart (no twice and #yikes).

We get it. It’s a thankless, low-paying job requiring a ton of preparation. These days, you must be excruciatingly charming and milquetoast for three hours like its Thanksgiving at the in-laws. Lord help you if you say something slightly politically incorrect or hurt the feelings of the sensitive beautiful people in the audience. Can you blame countless candidates for pulling a Le’Veon Bell and sitting this year out?

But the show must go on – even in the face of declining ratings.

The Academy has only itself to blame. The Oscars have been a bloated cluster****. It tried to institute a “popular film” category. An idea that was so contrived and insulting that the plug was pulled in the wake of heavy criticism. The nominees still aren’t diverse enough (No female directors, no Asians). And in an ill-conceived effort to shorten the broadcast, the Academy was going to award several trophies like Cinematography, Editing during commercial breaks. (It has since reversed course on that plan).

If you love movies, you’ll endure the crap. And you don’t even get one of those fancy Oscar swag bags (six figures’ worth of products!). You’ll suffer through every awkward interaction, unfunny joke, droning speech, fashion faux pas, and fake smile by a losing actor. However, there are ways you can combat drudgery.

Chug a beer every time:

You’ll be feeling fine 25 minutes into the show.

If you take the Oscars too seriously, you’ll be disappointed. The Academy could botch a cup of coffee. These are the same jokers who last year gave the Best Film award to The Shape of Water instead of Get Out. There are college courses about Get Out. The only thing anyone remembers about The Shape of Water is that Sally Hawkins had sex with a fish man.

Sometimes the Oscars provide unintentionally funny moments. That’s reason to watch. Whether it’s John Travolta’s inability to pronounce Idina Menzel’s name, a streaker interrupting David Niven, or the mother of all screwups: La La Land being mistakenly announced as the Best Picture winner instead of Moonlight.

Should Have Been Nominated: Eighth Grade

The Oscars didn’t need a popular film category. Three of the nominees were box office hits. Black Panther was the highest grossing film of 2018 ($700 million). Bohemian Rhapsody was No. 12 and A Star Is Born No. 13. These moneymakers will try to beat Roma. The Netflix film could become the first foreign language movie to win Best Picture.

Roma is beautifully shot. It’s also excruciatingly slow. The struggle to stay awake is real. And my God, the dog poop (SPOILER ALERT!). So much poop. Bohemian Rhapsody is a fan favorite, but is a VH1 ‘Behind the Music’ parody and plays fast and loose with the facts, and there’s the Bryan Singer problem. A Star is Born is just okay. Green Book is cringe-worthy at times despite tremendous acting. The Favourite starts off great but loses steam in the final 30 minutes. Vice: too gimmicky.

That leaves Black Panther and BlacKkKlansman. Either one would be fine (Hey, Hollywood! Help a brotha out.). Slight nod to Black Panther, a ground-breaking achievement in ways that elevated it beyond a mere comic book film.

Should Have Been Nominated: Ethan Hawke (First Reformed)

This might be the strongest category. You really can’t find fault with any of the performances and they’re all different. Four are based on real-life people, so the degree of difficulty for Bale, Dafoe, Malek, and Mortensen was slightly higher (Sorry Bradley Cooper). Three are celebrities, so that’s even trickier (Sorry Viggo Mortensen).

It boils down to this three-man race. If you add in physical transformation as part of the equation, then there are just two possibilities: Bale vs. Malek. Malek might be the popular choice due to Bohemian Rhapsody’s box-office clout. He looks like and moves like Freddie Mercury. However, will the Singer controversy affect his chances?

The best overall acting job is by Bale, who transformed into former vice president Dick Cheney. Not only does he look like Cheney, but he replicated Cheney’s mannerisms, speech, and even his walk. Bale, arguably the best actor of his generation, should pick up his second Oscar. (He won Best Supporting Actor for The Fighter).

Nominees: Glenn Close (The Wife), Yalitza Aparicio (Roma), Olivia Colman (The Favourite), Lady Gaga (A Star Is Born), Melissa McCarthy (Can You Ever Forgive Me?)

Should Have Been Nominated: Toni Collette (Hereditary)

Glenn Close is the Buffalo Bills of Oscars. No living actor or actress has been nominated more times without winning. This is her seventh — three supporting, four leading — try. She’s been previously nominated for The World According to Garp (1982), The Big Chill (1983), The Natural (1984), Fatal Attraction (1987), Dangerous Liaisons (1988), and Albert Nobbs (2011).

If she loses again, she’ll creep closer to Peter O’Toole’s record at eight nominations with no wins. For that reason alone, Close is also the sentimental favorite. However, this would not be a lifetime achievement award. Judge The Wife on its own merits. Close earned this. She’s the perfect embodiment of woman who sacrificed for her husband’s success.

The only other performance rivaling Close is Melissa McCarthy. She plays real-life letter forger Lee Israel, so it is a more difficult role. But Close is so powerful and so perfect, she deserves the nod.

Should Have Been Nominated: Michael B. Jordan (Black Panther)

How the hell can you overlook Michael B. Jordan? He has the two best scenes in Black Panther.

Mahershala Ali could’ve been nominated for a leading role. Guess they wanted to give the Green Book stars a better chance to win two acting Oscars instead of having Ali and Mortensen competing against each other. The one performance that sparkles is Richard E. Grant. He’s the perfect drunken scoundrel and complement to Melissa McCarthy. Hand him the trophy.

Should Have Been Nominated: Claire Foy (First Man)

Adams could be the new Glenn Close before the night is over. This is her sixth nomination. She’s never won. If not for Bale, everyone would be raving about her interpretation of Lynne Cheney. This might be her best effort since Doubt (2008).

If Adams loses, Regina King is worthy. She’s a grinder who’s better known for her television work (She’s won three Emmys). If Beale Street Could Talk is her first big screen appearance since 2010. She’s heartbreakingly excellent as a distraught mother.

The dual nominations from The Favourite might cancel each other out. Stone and Rachel Weisz make for a delightful pair but the most interesting character in that film is Olivia Colman.

Should Have Been Nominated: Ryan Coogler (Black Panther)

Shockingly, this is Spike Lee’s first nomination. This speaks to Hollywood’s longtime diversity problem. BlacKkKlansman, while terrific, isn’t even among Lee’s top three movies: Do The Right Thing, Malcolm X, and 25th Hour all should’ve received nominations of Best Picture and Best Director. Lee, the Jackie Robinson of modern-day filmmakers, help paved the wave for guys like Ryan Coogler.

BlacKkKlansman masterfully weaves the real-life story of a black police officer who infiltrates the Ku Klux Klan. Lee’s style and gift for are on full display here. He’ll attempt to upset Alfonso Cuarón. Roma is one of the most visually impressive films of the year. Of course, that’s to be expected from Cuarón, who won an Academy Award for the extraordinary-looking Gravity. But Roma is flat-out boring at times. And did I mention the dog poop?

*Full disclosure: Was not able to see Cold War. My apologies.

Have a happy Sunday Funday.