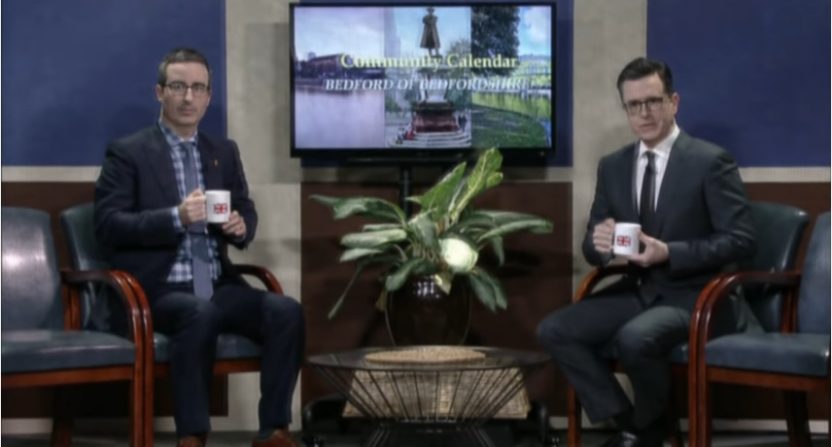 John Oliver is finally — finally — returning to the airwaves when we need him most. Last Week Tonight resumes on HBO this coming Sunday at 11 p.m. ET after a three-month hiatus, which has given the comedic news anchor the necessary time to process what’s been going on in the country since the results of Nov. 8 and the beginning of the Donald Trump regime in the White House.

Prior to his return, Oliver stopped by The Late Show to visit former Daily Show colleague Stephen Colbert to talk about the first weeks of the Trump presidency and its effect on the culture which the two comedic commentators regularly observe. Oliver joked (or maybe not) that covering the Trump administration is already “exhausting” and that if he continues to make fun of the president, maybe his green card won’t be enough to keep him from being deported, in light of the executive order on immigration.

Eventually, however, Oliver and Colbert discussed more pleasant topics, notably the small English town from which the Last Week Tonight host emigrated to this country. Oliver described his hometown of Bedford as “not a big city, a town, but a scrappy town. “You back it into a corner,” he added, “it will chew your face off.”

Colbert loves small towns and bringing up Oliver’s hometown provided an opportunity for one of The Late Show‘s recurring features: Community Calendar. What would a public access show about events in Bedford of Bedfordshire, England look like? Wonder no longer, as Oliver and Colbert review what’s going on in town.

There was even something of a sports connection in there, as Oliver mentioned a cricket event.

“The Flitwick Cricket Club will hold a seminar about their playing grounds. You won’t want to miss it because in cricket, lawn maintenance is genuinely the most exciting part of the game. The event will have presentations from local seed and fertilizer suppliers, so stop on down for a literal bullshit session.”

Other events included a corn exchange and building shoebox homes for badgers. What an exciting time for Bedford.

As mentioned, this is a recurring feature for Colbert on The Late Show. If the host finds out a guest is from a small town, it’s an opportunity to fire up the Community Calendar. Here is Adam Driver hosting the program, covering events in Mishawaka, Indiana.

Jeff Daniels also visited a previous show to review the events happening in his hometown of Chelsea, Michigan, where he’s continued to live even after his success in movies and television. That calendar may have been real, folks.

Adding to the spectacle of Colbert hosting the show was him inviting Michigan native Eminem (not from Monroe) as his guest. The comedian and rapper created some YouTube history with their collaboration.

So who might be Colbert’s next guest on Community Calendar? Any celebrities with upcoming TV shows, movies or albums to promote who originate from small towns in America — or elsewhere in the world? If so, Colbert has four chairs, a widescreen TV, a plant and a cozy studio to share what’s going on in that town.