It was 18 months ago, but in a lot of ways it feels like it just happened yesterday. Max Levy, a then four-year old scamp with moderate hemophilia A, was on his way to school when his dad—cape-crusading as the guy writing these words to you—had to tell him some bad news.

Max hurt his ankle a few weeks earlier (we think at school, but we never quite found out how) and the bleed that developed never properly healed. For those who don’t know anything about hemophilia, the short explanation is your blood won’t clot properly, and at Max’s level—he has one percent of factor VIII in his blood and the average person has 50 to 150 percent—he had trouble healing even with regular factor treatments.

Max was put on prophylaxis, getting treatments three times per week. That is, until his veins dried up. If you ever want to hit rock bottom as a parent, watch a nurse sit in your living room trying to find a good vein in your four-year-old son’s foot, because there’s nothing left to use in his arms.

At that point, the decision was made to outfit Max with a portacath, so the factor could be administered through the port right into his bloodstream. No need for butterflies or IVs anymore, just the pesky formality of cutting a kid with hemophilia open to put the port in.

Back to the car ride to school. I wanted to come up with a way to explain what the doctors were going to do to Max. We had just watched Iron Man a few days earlier, and the most important and literally life-changing thought came into my head.

“Hey Max, remember the scene in Iron Man when Tony Stark takes that round metal thing out of his chest?”

“Well, you’re getting one of those in your chest.”

Yes. You get to be Iron Man, buddy.

When Max went in for his surgery, I wanted to keep friends, family and well-wishers abreast of the situation—ah, hell I wanted the distraction of not having to pace around a hospital with my wife, nervous as hell that something could go wrong—so I created the hashtag #IronMax that people could follow and offer support.

#IronMax, we're gonna be two of a kind. High fives for Friday, big man – you got this. pic.twitter.com/q0PfCj1ebE

I have great friends, and some who are huge comic book enthusiasts—including one such enthusiast and professional reviewer, Matt Terl of the internet—who sent Max’s story to a few writers who have penned Iron Man titles in the past.

That’s when this happened.

Yo #IronMax i'm going to put you in a comic with Iron man, for real, so stay strong and we'll make it happen. @DanLevyThinks keep me posted

I didn’t know what it meant at first, but several tweets and correspondences later, Brian Michael Bendis—probably the top comic book writer on the planet, if you take out the probably—was going to have my kid meet Iron Man.

The only problem: Bendis—the man who brought the world Jessica Jones and the Powers TV show on the Playstation network and a million other projects the past two years, so how in the world did he have time to even tweet me about Max, let alone promise to have him meet Iron Man—was splitting time in outer space with the Guardians of the Galaxy and in Marvel’s Ultimate universe trying to keep Miles Morales from being eaten by Galactus and imploding inside the multiverse. (Comics are pretty confusing these days, folks.)

Point is, the guy is busy, and Marvel moved a bunch of things around because of all their movies and TV shows and other amazing things they do, so it took a little longer than most expected for Bendis to take over writing Iron Man, which finally happened this fall.

One day in September, I got an email that said “well, it is FINALLY that time. send me pics of you and max. he is going to meet iron man in issue 4. sooner is better.”

I cobbled together a few dozen photos and sent them to Bendis and artist Dave Marquez, who put together the most amazing surprise any of us could imagine. 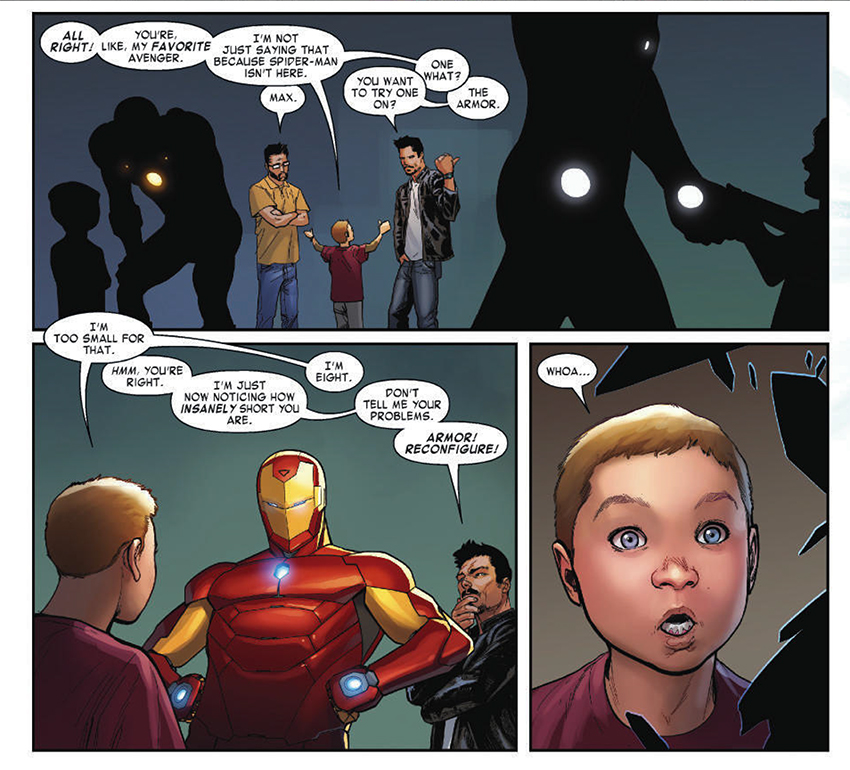 I totally thought Iron Man would fly down a street and say hi to some kid on a school bus who kind of looked like Max. Never in my life did I think they would make part of the actual story about him. Never in my wildest dreams did I think that Iron Max would wear a custom-sized Hulkbuster and (spoiler alert) aim his repulsor rays at Victor Von Doom.

In the comic, Max is eight years old. We think that might be a nod to his sister, Zoe, so it’s a treat for the entire family. And if it could possibly get better, this is what Bendis wrote about the kids.

We have a very special guest star in this issue, and we’re not just talking about Mary Jane Watson! Say hello to five-year-old Max Levy, a young kid who’s making a big difference!

Max was diagnosed with Hemophilia A as a baby, and his family nicknamed him Iron Max last year when he got a port in his chest as part of his treatment, just like Iron Man. Along with his eight-year-old sister, Zoe, Max created the Hearts 4 Hemophilia calendar, a project that has raised over $7,000 to support the Children’s Hospital of Philadelphia, where Max has been a patient most of his life.

And since heroes belong in comics, we couldn’t resist giving Max a cameo in ours!

If you aren’t crying after that, you need to check your arc reactor.

As a baby, Max had to visit the Children’s Hospital of Philadelphia ER on Christmas night after hitting his head, part of a run of major holidays we spent visiting the hospital for random bleeds that year. (Fun times.)

During that visit, Max was given a stuffed bear we named Choppy. Given Bendis had Max meet Iron Man at the hospital, and given it’s the holiday season, we wanted to pay it forward, so to speak.

Today, on what we’re calling “Iron Max Day” here in our part of the multiverse, we are going to CHOP to donate toys to those stuck in the hospital around the holidays. They are all Iron Man toys and games, of course, and they came from the leftover money we collected from the kids’ calendar sales. Marvel generously donated a ton of great trades and books as well, so many that they probably won’t notice if we keep a few at home. (Kidding.)

And that is the 18-month tale of Iron Max, from little boy with hemophilia to full-fledged bad-guy fighting super hero. It’s quite the origin story, and thanks to Bendis, Marquez, Tom Brevoort and all the amazing people at Marvel, everyone gets to finally read it today.

You can buy Invincible Iron Man #4 at your local comic shop today, or go to your favorite online retailer to purchase it there.