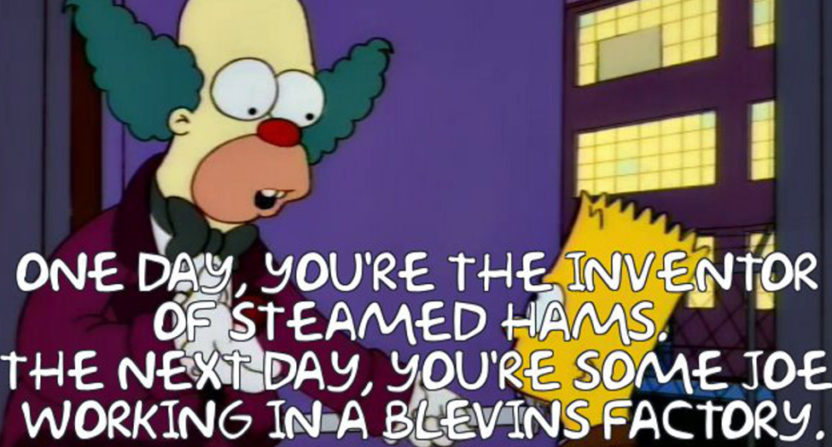 The internet loves references to The Simpsons, and over the last couple of years, references to the “Steamed Hams” segment of the 22 Short Films About Springfield episode (featuring Principal Skinner burning the food he was trying to cook, then trying to pass off Krusty Burger food as his own to Superintendent Chalmers) have become exceptionally popular. That gained even further prominence in January, when long-time Simpsons writer and showrunner Bill Oakley posted his original draft of that section. And yet, when writing about the Steamed Hams meme Wednesday, Mashable’s Sam Haysom credited not Oakley, but Twitter user Joe Blevins for his reply to Oakley that noted how Oakley’s original script mentioned “dinner” instead of “luncheon” (one of the very few changes made). The post, which went up Wednesday morning, was still uncorrected as of 9 p.m. Wednesday night, but in case they change it later, here’s what the key part looked like: 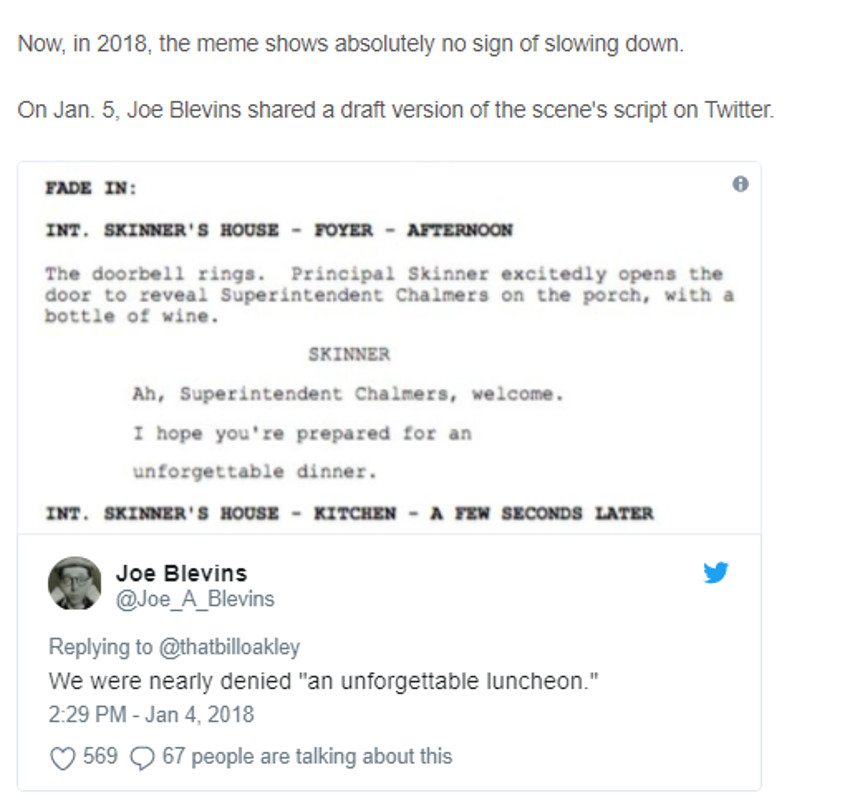 Oakley weighed in on this on Twitter, and things then got very funny, with Blevins apologizing himself (even though he didn’t cause the problem) and tons of people sending in Simpsons GIFs with lines changed to be about Blevins and Oakley. Here are a few of the highlights, but many more can be seen in the responses to Oakley’s first tweet:

Hey @mashable it weren’t Simpsons writer Joe Blevins (?!) who shared his original first draft of the Steamed Hams script on Twitter last month and therefore I am not RT’ing your article about the worlds greatest meme

I have such mixed emotions here. No, I am not a Simpsons writer. I'm a person with a Twitter account who responded to a tweet by @thatbilloakley. On the other hand, it's nice to be mentioned in an article, even if it's just a mistake. https://t.co/Ie9Jw7g3sc

That’s pretty hilarious. You’d expect a social media-focused site like Mashable to understand the difference between an original tweet and a reply (or even to read and link their own site’s piece from January on Oakley posting that draft), but hey, if they’d done that, we’d never have seen these memes. So well done, Mashable. You found a way to make the long-running Steamed Hams memes even funnier.