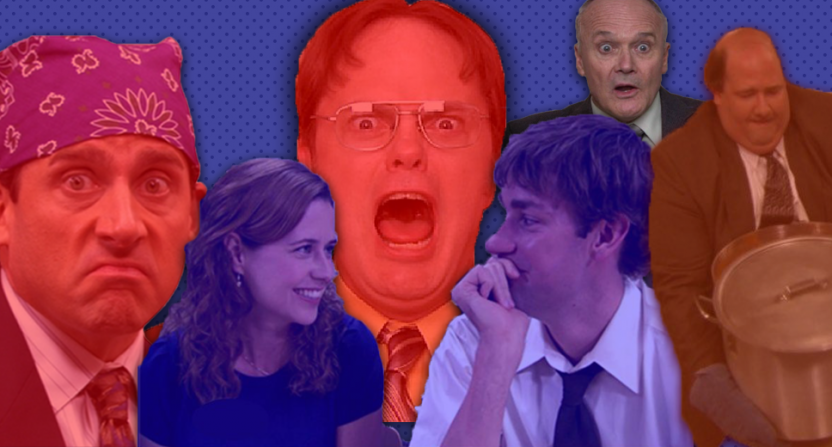 On May 16, 2013, fans of NBC’s The Office watched Dwight Schrute get married to Angela Martin — spoiler alert — in graves, Ryan Howard and Kelly Kapoor elope, and Jim and Pam Halpert move to Austin, TX.

The last five years have seen countless NBC sitcoms come and go, none of which have made the kind of cultural impact that The Office did, except for maybe Parks and Recreation. To celebrate the five-year anniversary of the final episode involving our favorite Dunder Mifflin paper salesmen, we got together to discuss some of our favorite and least favorite moments of the show’s nine-season run.

The Office aired 201 episodes over its run, but which episode is the best?

David Lauterbach: To me, it’s the season 3 finale “The Job”. The episode is not only funny, but also incredibly important to the show’s run in terms of multiple plotlines: Ryan gets the corporate job, Jim finally asks Pam out for real, Jan gets fired by corporate, Dwight gets his first shot at the regional manager’s job, and more.

David Rogers: “The Injury“. This is an incredibly difficult choice, but it hits all the right notes across the entire episode: Michael grilling his foot, Dwight’s concussion, Chuck E. Cheese (I’m so sick of that place). There’s just so many jokes that land in big ways that I catch myself constantly laughing.

Alex Putterman: I don’t have a single favorite, but I did recently watch the season-four double episode “Money“, and between the “who vs. whom” conversation, Dwight’s bed and breakfast, and “I declare bankruptcy,” I’m not sure there’s another episode that makes me laugh as much as that one.

Sean Keeley: So many to choose from, but the fourth season’s “Dinner Party” really stands out to me. Jan could have been such an unenjoyable character, but Melora Hardin steals the show a we get to see Fully Weaponized Jan in her element. It’s cringe-worthy watching her give the tour of her scented candle workshop, showing us how Michael sleeps on a cushion at the end of the bed, and barely masking her past indiscretions with her former assistant turned singer/songwriter. To say of nothing of Michael’s multiple vasectomy operations and neon beer sign. My wife and I still speak in overemphasized “yeah babe, sure thing babe” responses because of this one. (Editor’s Note: This oral history of the episode by Rolling Stone is fantastic.)

Phillip Bupp: “The Dundies” is the standard. Season one was good, but when The Dundies came back to start season two, that put it over the top as a well done, hilarious show.

Sam Blazer and Jordan Lochard: “The Convict“. It shows Michael at his very best and very worst. It isn’t politically correct and it shows just how messed up both the merger and the office itself can be. Prison Mike is an all-time great Michael character as well.

David Lauterbach: Creed. This is a weird one because he isn’t really a main character compared to Michael, Jim, Pam, Dwight, Andy, and Ryan, but I don’t care. Creed has about a 95% success rate in terms of funny lines.

David Rogers: I already said Michael, but I’ll add that I love just about everything Creed said on the show.

Alex Putterman: I’m sure everyone else will pick Creed or Kelly or someone like that to show off what a true fan they are, but the truth is, Michael was the best character on The Office and also my favorite. When you re-watch, you realize just how many episodes he carried. The degree to which the show slipped after he left reinforced just how integral he was.

Sean Keeley: Creed Bratton. I distinctly remember watching the sixth season’s “Murder” episode, otherwise known as when Michael keeps saying “I do declare.” Halfway through the game everyone is playing, Creed enters the office and is told there has been a murder. I knew exactly what he was going to do, which was excuse himself and immediately hightail it because, most likely, he has been involved in a murder at some point in his life.

Phillip Bupp: Definitely Creed Bratton. His backstory is completely outrageous that we feel like we know everything about him, but yet actually know nothing. Creed also had some of the best one-liners in history.

Sam Blazer: Creed and it isn’t particularly close. Even when the show “went downhill” he was a beacon of light. His one-liners are constantly one of the best parts of the series. I love him and if you don’t, are you really a fan?

This may cause intense an intense debate… what is the best cold open?

David Lauterbach: Asian Jim. This makes me laugh every single time because it’s just so so random.

Alex Putterman: There are so many good ones, but I vote for the scene where everyone follows the DVD logo until it hits the corner of the TV screen. It’s just quintessential Office. Shoutout to the fire drill and Michael hitting Meredith with his car, though.

Sean Keeley: I’m gonna go with Season 3’s “Branch Closing” when Future Dwight faxes himself a note saying don’t let anyone drink the coffee because it’s been poisoned. Enter Stanley with a fresh cup of coffee and you know what’s coming, but it’s still classic.

Phillip Bupp:  Dwight setting fire to the office was rather entertaining. That entire scene was so outrageous, but was still within the basis of reality that the show would have. I could totally see Dwight trying to set fire to the office for a drill. Every character reacted to the fire the way I expected them to react.

Sam Blazer and Jordan Lochard: “Stress Relief”. When Dwight conducts his fire safety course, it doesn’t get much better. Oscar trying to leave, Angela throwing cats, and everyone screaming simultaneously. It’s an amazing cold open and it ends with Stanley having a heart attack. What more can you ask for?

Who would you rather be friends with? Jim or Pam?

David Lauterbach: Pam. I feel like Pam has more of Jim personality wise than the other way around, so you kind of get the best of both.

David Rogers: Jim. His looks towards a non-existent camera crew may get old, but his overall fun sense of humor would make it worth it.

Alex Putterman: Considering Jim is my least favorite character and I spent much of my adolescence crushing on Pam, it’s not close.

Sean Keeley: 25-year-old me would definitely be friends with Jim in the early years. Later on in the series, I’d probably veer towards a friendship with Pam. To be honest, the trajectory of both of them really bothers me (Pam sacrifices over and over, Jim becomes what he was the antithesis of), but I think Pam retains an authenticity and warmth that’d make her a good friend.

Phillip Bupp:  Definitely Jim. He knows sports and has connections to athletes via Athleap. Sorry Pam, but this is a no-brainer for me.

Sam Blazer and Jordan Lochard: It might be neither. Both have shown that they can be incredibly selfish. The problem with their actions doesn’t come into full view until later on. Pam is technically a cheater and Jim is a menace to his other employees. I wouldn’t mind grabbing a beer with them, but anything more than that might be too much.

David Lauterbach: It’s hidden in this longer clip from the season two episode “Sexual Harassment”, but the best one of the series is when Michael is fighting corporate and Jim baits him into saying his favorite joke right in front of Jan and the company lawyer.

Alex Putterman: That’s easy. The one during his deposition when Jan was suing Dunder Mifflin.

Sean Keeley: In the Second Season’s “Sexual Harassment,” Jim baits Michael into saying “that’s what she said” with a series of double entendres after he’s just said he’s giving up jokes because of sexual harassment claims. You know what Jim’s doing and you know Michael will take the bait, but that’s all part of what makes it so fun.

Phillip Bupp: Michael’s “that’s what she said” during his deposition in Jan’s lawsuit against Dunder Mifflin was genius. Michael went for the joke and created a cluster of confusion that made the entire scene even funnier.

Sam Blazer and Jordan Lochard: “Product Recall” episode when Michael says “I need two men on this.” I mean c’mon that is an all-time great joke.