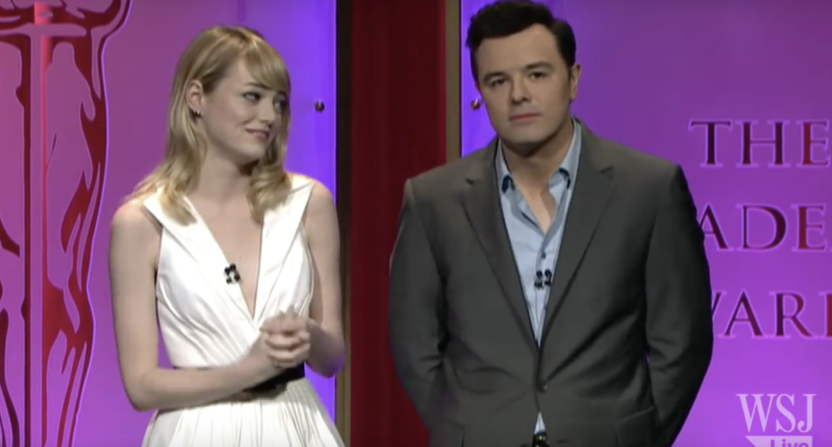 It’s unknown how many people in Hollywood were aware of Harvey Weinstein’s awful behavior before last week. The film producer was revealed to have been paying off Hollywood actresses for sexual assault and harassment for decades. This revelation has inspired many women in the industry to come forward with their own experiences with Weinstein. At least 20 actresses and models have come forward so far, including Terry Crews revealing he was assaulted by an unnamed Hollywood exec.

While those outside of Hollywood was unaware, we found out of at least one person who knew about Weinstein and that was Family Guy creator Seth MacFarlane. At the 2013 Academy Awards nomination ceremony, MacFarlane cracked what many thought to be a joke about Weinstein but that wouldn’t be the case.

After announcing the nominees for Best Supporting Actress, MacFarlane said, “Congratulations, you five ladies no longer have to pretend to be attracted to Harvey Weinstein.”

MacFarlane revealed today that what he said wasn’t a joke and that he knew about Weinstein.

“In 2011, my friend and colleague Jessica Barth, with whom I worked on the Ted films, confided in me regarding her encounter with Harvey Weinstein and his attempted advances. She has since courageously come forward to speak out. It was with this account in mind that, when I hosted the Oscars in 2013, I couldn’t resist the opportunity to take a hard swing in his direction. Make no mistake, this came from a place of loathing and anger. There is nothing more abhorrent and indefensible than abuse of power such as this. I respect and applaud my friend Jessica and those sharing their stories for their decision to come forward, and for being champions of the truth.

One thing people will notice is that if MacFarlane was aware of Weinstein’s behavior from as far back as 2013, why didn’t he do anything? I’m not going to insinuate what McFarlane was thinking but if Jessica Barth told MacFarlane about Weinstein in confidence, it would be bad to betray that confidence.

But just look at why many women don’t report sexual assault to begin with. Especially when it involves a famous person, thousands of people automatically don’t believe you because they assume you are just doing it for a settlement or are trying to get famous or think you for some reason were “asking for it.” And when it comes to someone who is influential in the industry you work in (Hollywood or otherwise) you could be at risk of being blackballed and would never be able to work again. It took until now, when multiple sites publish different articles about Weinstein’s behavior that got people to finally believe these women. I can see why MacFarlane would remain quiet if Barth had requested he do that.

It’s not like MacFarlane did what Rose McGowan accused Ben Affleck of doing. Affleck claimed in a statement that he was “saddened and angry” when he heard about what Weinstein has done. McGowan claimed that Affleck knew years ago because she told him about Weinstein and said Affleck told her, “Goddamnit! I told him to stop doing that!” in all caps.