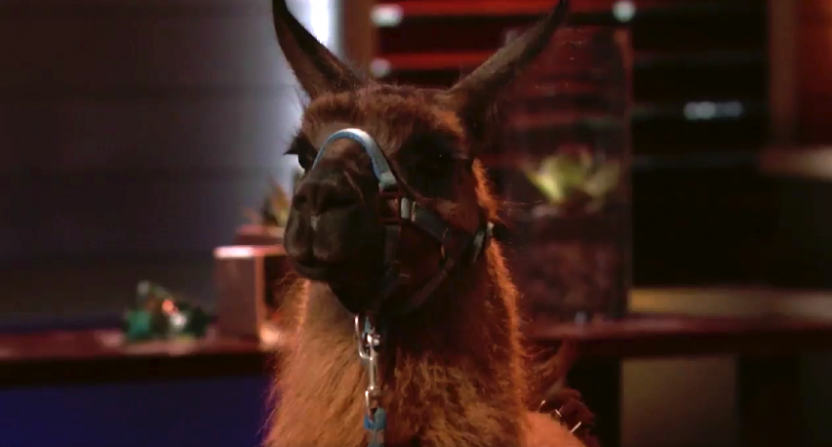 This is what I say whenever I see a llama, because The Emperor’s New Groove is hilarious. Imagine how loudly I exclaimed it when Shark Tank opened this week:

There's a llama in the Tank, and the Sharks have a field day as he does his business! ?? #SharkTank pic.twitter.com/2GijGMzjTl

Parisi calls the llama “docile, unassuming, non-threatening,” but “llamas are known” to attack predators head-on. Guard Llama is a Bluetooth-enabled key fob that, when you press it twice, transfers your name, bio, photo and location to the police.

“I’m gonna be honest, I’m a little let down,” Sacca says. He, like all of us, were hoping this was a literal guard-animal leasing business. Instead, it’s Bluetooth Life Alert. Of course, since it’s Bluetooth-paired to your phone, your phone has to be on, nearby.

If you press it twice, you get a phone call. If you don’t answer your phone, they dispatch police. Mister Wonderful wants to know, what happens if you do? Or worse, if your abductor does? But Navares and Parisi have addressed that. Giving the wrong PIN indicates that something is wrong.

You, me, and an incontinent llama. #SharkTank starts now. pic.twitter.com/GyN706gt2d

With the PIN/distress PIN system, it seems all the use-case bases have been covered. Guard Llama went live last September, and has 2,000 subscribers so far at $10/month or $100/year.

“I like everything about your company,” says Cuban, “except for the product. Your product’s horrible.”

Well! Sounds like it’s time for a DRAMATIC COMMERCIAL BREAK.

I knew I smelled something but I could’ve sworn it was Mr. Wonderful, not the llama!

“The minute someone has serious consequences because” GPS, Bluetooth, cell signal or any of the web of technologies that make this work fail, Cuban says, it’s going to be a legal and PR nightmare. Lori has similar concerns; she’s out too. Kevin wants to make an offer, but a $2 million valuation and five percent equity make no sense to him.

“Five percent is a nothingburger,” he says, and the llama makes some sort of hooting noise in agreement. “You’re right,” he says, and hits it with the #fingergunz:

If you think #SharkTank is great… pic.twitter.com/yIfEDDTs6s

Sacca has a litany of problems with this: The tech is neither bulletproof nor proprietary, he thinks the brand is “soft,” and the online direct-sales model is going to be difficult to scale. Like nearly all the Sharks so far, he believes the problems they’re going to have at 20,000 or 200,000 users just aren’t apparent yet.

Barbara, though, loved that the Guard Llama guys mentioned realtors as a potential market. As a real estate impresariess, the safety of realtors who meet up with strangers in empty buildings is something she’s keenly aware of. She proposes an interest-free $100,000 loan, plus 20 percent equity and a $2 per-unit royalty until she gets her money back. The entrepreneurs counter at 15, and she counters at 18.

Swim or chum? They make a deal. SWIM.

Should you buy? This one’s interesting, because I can press a button twice in an emergency — but literally betting my life on Bluetooth pairing isn’t something I’m excited about. SHOULD NOT BUY unless you’re in a high-risk job or they’ve proven it works.

It's the least we could do. #EmpowerWomen #endhunger https://t.co/zBIwHVjfa0

I actually laughed out loud at this pitch. It’s a photo-printing service like Snapfish and Shutterfly, but they offer up to 20 pictures a month completely free. How can they do it? They’re selling ads on the back of the picture.

“There are some very big companies printing people’s photos,” O’Leary says, “Why wouldn’t they simply offer the same thing?” Agboola says the reason Snapfish can’t copy Flag’s model is because their printing technologies don’t do double-sided. Flag could take a pretty hefty chunk of their business before Snapfish would be forced to buy all-new printing technology.

“$150,000 in advertising in three months,” Cowley boasts, and mentions the ad client is none other than VISA. Wow.

You’ve raised millions already and I don’t like the way those numbers sound, and for that reason I’m out! Good luck! #SharkTank

Here’s the catch: the “Flag” folks — and gosh, that’s really a TERRIBLE name — have already raised $1.6 million; the last round was at a $5 million valuation. They say they need the cash to in-source all of their production. Right now, they’re outsourcing the printing and laser-cutting tech that separates them from the competition.

But why, then, are they only asking the Sharks for $375,000? And what happened to the other $1.6 million? Agboola finally admits they’re trying to raise $5 million total, and the Sharks can’t believe it.

“Somebody call a doctor because this pitch needs CPR right now.” @Sacca is letting into them! #SharkTank

Barbara doesn’t like the way these numbers sound — and, she says, for some reason she just doesn’t trust them. She’s out. Lori says she tried a “free” ad-supported product one time, and was immediately drowning in takers and had to sell ads like crazy to keep from losing her shirt.

“I don’t usually invest in businesses doing old-school ads, with a really weak business model, in a crowded market, with five-alarm cash burn,” says Sacca, “but this time…”

Should you buy? As long as they’re giving them away and you aren’t planning to display the back of the photos, you absolutely SHOULD “BUY” until Flag runs out of cash.

Validated is an interesting app: you get transportation credits when you scan a QR code at at brick-and-mortar stores, acting as a universal parking validation. Beyond that, it can help pay for Uber, Lyft, or potentially any way to get out of the house and into a business.

The idea behind #GetValidated could make sense. But it all comes down to execution. Let’s see if these guys are the team to make it happen.

They say they “pivoted something else” into this product last fall and though it’s early, they’re only seeing a handful of validations per day at their Seattle- and Portland-area partners. Immediately, the Sharks start seeing why takeup is slow — and the problems the Validated guys are going to have if it ever picks up.

“You have to be the bank for the points,” Cuban says, brokering between retailers, parking structures, transportation vendors. “And you have to convince them the currency is valuable, which means you’re also the federal reserve.”

The @get_validated app from tonight's #SharkTank gets you free parking and @Uber, @lyft rides! Here's how… https://t.co/P12aNVd4s0 pic.twitter.com/kMbgctm9Ug

Sacca says he thought this was going to be easy — getting Uber credits for using B&M stores — but bringing in parking garages, other car services and potentially public transportation is a nightmare.

This is where the Cuban/Sacca dynamic is so great: Sacca really does live in Silicon Valley dreamland, where everyone uses Uber. Cuban knows limiting Validated to just an Uber-credit scheme would make it unusable for most of America (the Validated guys point out Uber’s less than five percent of the national transportation market).

But it’s a pick-your-poison situation: brokering between private parking companies, car services, public transportation authorities and ZipCar or whatever is going to be a logistical nightmare. This is Beenz for the new millennium.

“I hate this,” Mister Wonderful says. “you said you pivoted into this? Pivot the f***–the beep out of it.”

"You said you pivoted to this nightmare. I say pivot the beep out of it." – @kevinolearytv #SharkTank pic.twitter.com/dT8xHYKtZw

“QR codes are the herpes of mobile technology,” zings Sacca as they walk out.

Swim or chum? “I think it’s been so long that they’ve paid for transportation that they don’t understand what a pain point it is for the rest of us,” one says. Maybe, man, but that’s what your pitch is supposed to get across. CHUM.

Should you buy? I can’t see this taking off, so SHOULD NOT BUY but if you’re living in Portland, I guess you could give it a whirl?

These two seem to have built a better mousetrap — one that could keep a lot of kids safe. Their SureStop brake system ensures one brake lever always engages both brakes — rear brakes first, to prevent the rider going over the handlebars. It’s easier for kids to use, and reliably produces much shorter stopping distances.

Taking your kids out for a bike ride this weekend? This company wants to make that journey safer! ? #SharkTank pic.twitter.com/bSVQSKEmW9

Mister Wonderful asks the exact same thing we’re all wondering: Why would they go to the trouble of building out an entire bike just to sell these brakes? Right now, upgrading would mean just a $4 price increase to the total bike, but the big boys aren’t licensing the tech.

I like the @GuardianBikes safety angle. I have zero doubt it'll prevent thousands of injuries. But is it a good business? Let’s see.

“‘If I put this on some of my bikes,'” Jansen says one manufacturer told him, “it makes my other bikes look dangerous.'” So a children’s bike manufacturer would rather have a bunch of kids get hurt than lead the market with an inexpensive-but-effective new safety device.

So, the entrepreneurs built out their own entire line of bikes just to Trojan Horse their way into the market.

“Your marketing sucks,” says Cuban. “Your PR strategy sucks. You didn’t tell us how you’re going to tell parents” how much safer their kids are going to be. A terrible business with a great product? Mister Wonderful smells blood in the water — and a royalty deal.

With that ultimatum on the table, we go to a DRAMATIC COMMERCIAL BREAK. When we come back, O’Leary says they need “adult supervision.” The two ask the rest of the Sharks if there are any other offers on the table and after some noncommittal response, Kevin goes out. They’ve disrespected the deal.

Mr. Wonderful and disrespect don't get along. @kevinolearytv #SharkTank

“I’m gonna make you an offer,” Cuban says, “but there are a LOT of contingencies.” First, they have to prove their tech is truly unique and protected. Second, they have to hit their sales targets for the next year. Finally, they have to hire a PR person who can come in and teach them how to tell their story.

Swim or chum? They take it. SWIM.

Should you buy? Yep. This is a much better mousetrap and it’ll make your kids safer presuming you have them. Whether that means buying a whole new bike or retrofitting the technology (wait, they didn’t say if that’s an option yet…). Whatever. SHOULD BUY.