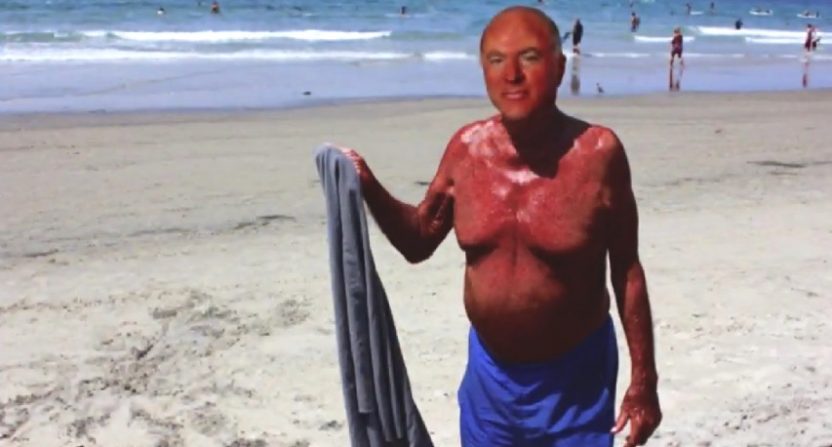 … what? Sometimes I can’t shoehorn it all into a jokey theme.

Three self-described Millennials come into the Tank ready to solve a perennial problem for beachgoers: thin beach towels are terrible towels, and thick bath towels are giant sand traps. Just ask the Sharks, who have had their heads digitally pasted on beachgoer bodies:

After extensively focus-testing various fabrics and thicknesses, they found a breezy premium fabric that was portable and fashionable. They hand out samples to the Sharks, who aren’t so sure.

“It’s very thin,” Robert says. “I wouldn’t think this would make a good towel after I got out of the water.”

They counter by saying it’s fine handmade Turkish whatever, kind of dodging the question. But this was heavily focus-tested by San Diego beach bums — and they’re buying.

The Sand Cloud dudes (who say they all moved in together and sold their cars to make this happen) sell most of their models for $47, when they cost just $10 to make.

Cuban offers $400,000, but for 25 percent. Rather than jump on a deal that will guarantee their inventory and cash flow AND make Mark freaking Cuban an equal 1/4th partner, they do this:

It’s a master class in screwing the pooch.

Daymond, though, is still in: He offers $300,000 for 25 percent. Which, you know, is way worse than the deal Cuban just offered. Mister Wonderful offers $200,000 for 15 percent, but he wants to be heavily involved in the sales and distribution. Robert offers the same deal: He didn’t like the ugly Christmas sweater business he invested in, but it’s raking right now.

Now they’ve got plenty of options — none as good as the one they let get away, but good enough.

Swim or chum? They jump in with Robert, who knows this space well and can help them crush it. SWIM.

Should you buy? If you’re a surf bum — or a hoopy frood who always knows where your towel is — you definitely SHOULD BUY. Otherwise, 50 bucks for a towel that won’t dry you off after a bath and is also kind of a sarong wrap thing? Yeah, no.

We begin with a demonstration of all the horrible-sounding ways dietary supplements source their nutrients:

Chang, a foodie and chef, helped Smelko develop a line of organic supplements that happen to taste great. At first, we’re not quite sure if they’re food, but the samples make it clear this is a line of sprays and drinks that hit the spot:

They’ve sold over $400,000 worth so far, all online. They went from zero to $65,000 per month in just seven months, but then their production couldn’t keep up. They raised $150,000 on a convertible note, on a $2.2 million valuation, but they still need more capital to ramp up as they try to penetrate Whole Foods, Trader Joe’s and the like.

Robert says it’s not for him. Lori doesn’t like the branding or marketing. The labels do a poor job of communicating what the product is or why it’s different. They’re both out. Daymond gives them some education on valuation:

This happens so often on Shark Tank, and it’s so frustrating. Entrepreneurs with a little success under their belt look at the giants they’re about to take on and think they’re destined to carve off 10 or 20 percent of the industry. I can build a computer, but I wouldn’t tell people I’m worth $200 billion because Apple’s worth over $600 billion. In fact, it’s because supplements are such a competitive sector that these guys need to be conservative with their projections!

“Getting share is going to be really hard,” agrees Mister Wonderful, but crowbarring his way into a tough market is something he can do. He offers the $375,000, but he wants 20 percent of the company — a whopping four times what they were offering.

“D’OHHHHHHH!” yells Cuban, and we go to our first DRAMATIC COMMERCIAL BREAK.

… a moment, friends. As soon as these guys said the words “$375,000 for a five percent stake,” they were completely and utterly screwed. Unless you’ve got the sales to back up these goofy multi-million valuations, you’re just ruining your chance of getting a deal — and certainly, getting a good deal with the right Shark.

Now Mister Wonderful’s got them by the tail.

“I’m not even interested in negotiating, guys,” he says, but in fact they end up negotiating a little bit. Kevin ends up adjusting his offer to match their $2.2 million seed-round valuation, but they’re not into it:

Swim or chum? “Our projections,” schmour schmushmections. Ora Organics is CHUM in the Tank and without the help of a Shark, they may be chum when they try to get shelf space in Whole Foods.

Should you buy? Supplements that are natural and tasty? Cool. Are they going to be price-competitive and widely available? I’m not sure. I think you SHOULD BUY if you’re already regularly taking supplements.

We get a little bit of Shark cross-talk after these two take the long walk out of the tank, and both Cuban and O’Leary get in zingers:

I’ve seen drones flown well, and I’ve seen them flown poorly, and I’ve tried to fly them myself and done really, really poorly. DartDrones teaches a $400 one-day class, with the help of an an app and tethering system, and they’re currently teaching in 27 cities.

Spiecher, an entrepreneur with some serious experience given her apparent young age, deftly defuses a lot of the confusion the Sharks (and I) have about the exact nature of the product. We also get to see Robert take a crash course:

Though it’s a little hard to see that this problem — not being able to fly drones well — is not exactly a huge one, Daymond actually explains why it’s huge:

“We’ve been operating for 18 months,” Speicher says, and they’re on track for $1.2 million in sales this year. Yet despite all this repeatable success, they’re still not profitable yet. Speicher says there’s a good reason.

“What we notice in our classes is that our users are commercial users,” Speicher says, so she’s been investing $300,000 of what would have been profit into re-developing the teaching curriculum to be geared towards users like public safety.

They’re the only national school, and colleges are already beginning to approach her about licensing the teaching courses.

“I’ll give you the $300K for 10 percent,” Cuban says, “but I don’t wanna go through all this. If you’re interested in working with me, say yes. If not, I’ll defer to everybody else.” This is a bold strategy and boy, does it ever pay off.

Swim or chum? “Done!” Done. SWIM. We get some fantastic cross-talk from the Sharks afterwards, about why exactly Cuban was willing to meet Speicher’s initial terms (also, Speicher grinning like the cat that caught the canary):

Should you buy? If you have, or ever will, fly a drone, you SHOULD BUY. Saves you from wasting the cost of a drone.

I have no idea what to do with these guys:

So these two want to help stop poaching, ivory farming, habitat destruction, etc. That’s why they have made vaguely African-looking Hammer Pants, 10 percent of the net profits of which are being donated to help protect elephants.

The pants retail for $24, but cost just six bucks to make. They’ve sold a whopping $7 million over the course of two years, which perks the Sharks’ ears right up… but they keep asking WHAT made them grow so fast, and keep getting the same answer: They used Facebook marketing to drive online sales, then used the revenue to buy more Facebook ads, etc. 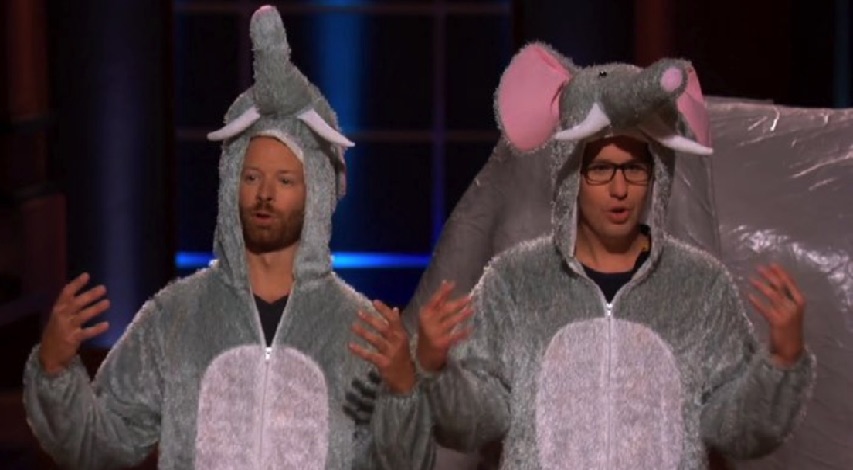 “Facebook giveth, and Facebook can taketh away,” Cuban says. He rightly notes that plenty of businesses have been founded on Facebook’s ever-shifting algorithm, only to have a single tweak or policy change undo everything.

“I hate cruelty to animals,” Lori says. She announces she’d be willing to jump in on one of these deals.

Things got fast and furious from here; the entrepreneurs tried to get all three Sharks in together, but Daymond doesn’t need Lori or Kevin’s help to sell pants. Kevin and Lori partner up, while Daymond flies solo:

The entrepreneurs feel out Daymond’s offer, $500,000 for 20 percent. As they’re negotiating over equity, Kevin and Lori get itchy. That’s when Robert insists the winning Shark(s) will have to Hammer-dance with the bait:

With Lori and Mister Wonderful out, it becomes a matter of appeasing Daymond. The final offer involves some reserved shares to help appease their existing investors, but we finally get some Hammer Dance:

We also get OVER $100 MILLION IN SHARK TANK DEALS, which is an incredible milestone.

Swim or chum? “He’s really gonna help us drive our long-term sales,” they say — oh and uh, maybe save some elephants! SWIM.

Should you buy? These look like cool pants. For $24? Well, if you’re a writer who spends a lot of time not leaving the house, you definitely SHOULD BUY.

*helps save the elephants, maybe*