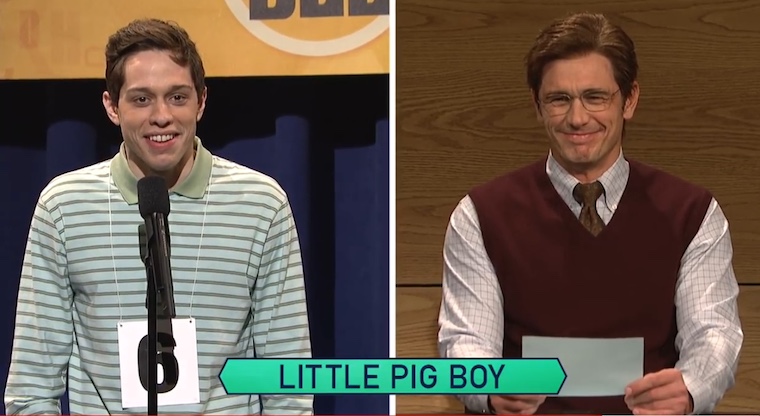 Saturday Night Live had one of its funniest episodes of Season 43 this week with host James Franco. Taking advantage of his skills as both a dramatic and comedic actor, the writing staff and cast gave Franco plenty of good material to work with.

One of the best sketches of the night was set at an Iowa City spelling bee, during which the pronouncer (played by Franco) revealed a bit too much of his dark past and depraved tendencies while giving words to the contestants.

The bee’s second round started harmlessly enough with the word “berate,” but things quickly became awkward. Take a look:

“I’m dead inside because my stepfather used to berate me with insults and emasculate me with feminine nicknames,” said the pronouncer when asked to use the word in a sentence. “Berate.”

Credit to the pronouncer, both “emasculate” and “feminine” might have been good words to use in the competition as well. That’s the kind of vocabulary which might be preferred in a spelling bee pronouncer — even one that was apparently verbally abused and mocked by his stepfather.

Perhaps we all learned something with the use of the word “urophiliac,” having it used in a sentence and its proper definition. Learning new words and potentially expanding our vocabularies is one of the best parts of watching a spelling bee. That’s a good job by the pronouncer, though he probably has some work to do before he gets the call up to the Scripps National Spelling Bee in Washington, D.C.

Fans who love to see hosts and cast members break during a sketch got a good moment late in the skit when Franco gave Pete Davidson “Little Pig Boy” as his word. He almost lost his amusingly intense character, but managed to hold himself together despite smiling and chuckling with a little shoulder shake of laughter.