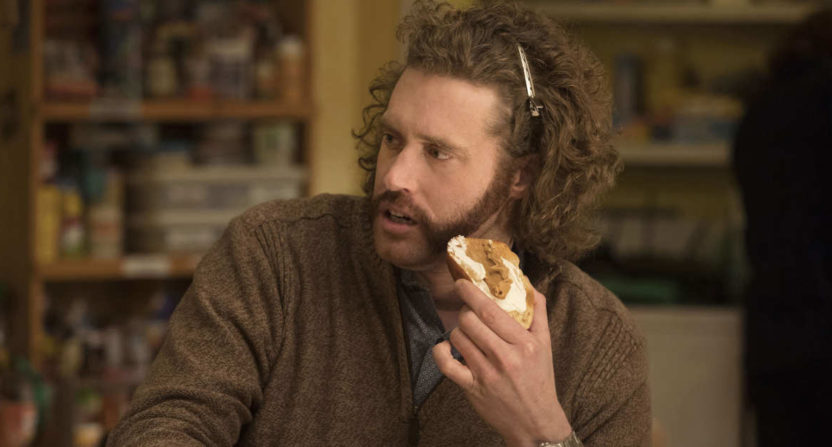 It’s been quite the year for T.J. Miller, who “mutually” parted ways with HBO’s Silicon Valley despite its renewal (leading to the show marooning his Erlich Bachman character in an opium den in Tibet), conducted a really odd performance-artish interview about his exit, mocked a small-town newspaper writer who criticized his stand-up special, was accused of sexually and physically assaulting a woman back in 2001, and voiced the central “Meh” emoji in the widely-panned The Emoji Movie. (He does also have a role in Ready Player One.)

And now, Miller was arrested Monday night over a fake bomb threat he apparently called in while drinking last month to get back at a woman he was arguing with. Here’s more on that from TMZ (they also have a video of his arrest, but there isn’t anything notable in it):

Miller was arrested by FBI agents over an Amtrak bomb threat he reported back in March.

According to the FBI docs, Miller called 911 on March 18 while he was riding an Amtrak train from D.C. to NYC … and reported a woman with brown hair and a scarf “has a bomb in her bag.” An Amtrak police officer called back Miller who added … “the woman kept checking the bag and seemed to want to get off the train and leave it behind.”

The officer asked Miller if he suffered from mental illness … which he denied, and said, “This is the first time I’ve ever made a call like this before. I am worried for everyone on that train. Someone has to check that lady out.”

As it turns out … Miller gave cops the wrong train number, and as a result a different train was stopped in Connecticut, evacuated and searched … causing massive Amtrak delays. Meanwhile, Miller was on his train to NY.

According to docs, Miller was removed from the train in NYC because he was intoxicated. The train attendant said Miller had consumed 2 glasses of wine and 2 double Scotch and sodas. The attendant also reported Miller had “exchanged profanity” with a woman in the First Class car — and he did not back up Miller’s account of the woman’s suspicious behavior.

Meanwhile, the woman told police Miller was being loud and belligerent and had made a comment about her hair, leading to them arguing. And the police reportedly determined that Miller made a false bomb threat over a grudge against this woman, and caused 926 man-hours worth of delays in the process, plus disrupted bomb squads and law enforcement agencies in New York and Connecticut. He’s been booked, and was released Tuesday after providing $100,000 bond.

Oh, and it’s not particularly related to the case, but BuzzFeed’s David Mack called Miller’s voicemail, which has quite the soliloquy about leaving messages:

I called the cell phone listed in the TJ Miller indictment and got his voicemail. It’s…something pic.twitter.com/gjYSMWvZPs

This story is bizarre, especially as “arrested for calling in a fake bomb threat over a grudge while drunk” sounds more like something you’d expect from Erlich Bachman than from Miller himself. We’ll see what comes of this.