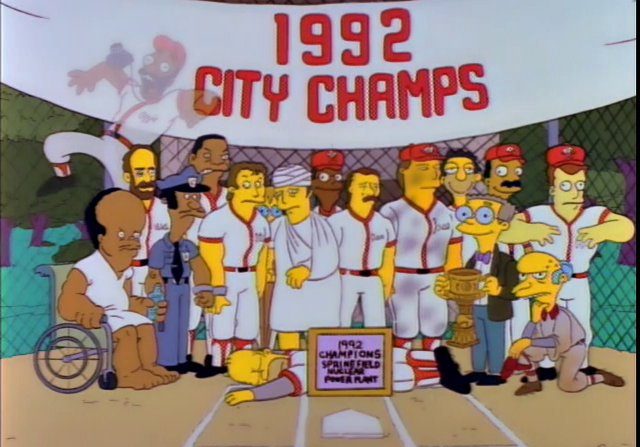 The Simpsons is in its 31st season and after 680+ episodes, they have focused on just about every subject imaginable. As a result, they have done many episodes about many sports. Some sports themed Simpsons episodes are classics, some not so much but we’re going to take a look at the 10 best sports episodes and maybe give you an idea of what to watch while at home.

“And I gave that man directions, even though I didn’t know the way. Because that’s the kind of guy I am this week.”

Hungry, Hungry, Homer showed a disappointing side of sports, a team planning to move to another city. After accidentally finding out the Springfield Isotopes were planning to move to Albuquerque, Homer went on a hunger strike and proved that the team was planning to move, therefore keeping the team in Springfield. There may have been better sports episodes but this was one that translated to real life as two years later, the new Albuquerque AAA baseball team named themselves the “Isotopes.”

“That shot is impossible! Jack Nicholson himself couldn’t make it!”

One of the first episodes to prominently feature Ned Flanders and Homer’s jealousy of his religious neighbor. Bart and Todd entered a miniature golf tournament to have some fun but Homer took it personally and not only told Bart that he has to win but made a bet with Ned that “the father of the boy who doesn’t win has to mow the lawn in his wife’s Sunday dress.” When Bart and Todd chose to stop playing and share first place, they taught the adults an important lesson on sportsmanship even though Homer didn’t quite understand that.

Boy did that line age. Anyway, you’ll notice many Simpsons’ sports episodes revolve around Homer’s parental instincts with Bart and/or Lisa. Unlike most episodes where Homer showed what not to do as a father, Homer at least made an attempt to be a good father here and tried to help Bart with his soapbox racer. It wasn’t really smooth sailing but it all worked out and eventually, Homer wound up being a better person than Bill Cosby.

This episode was great for a variety of reasons. The Super Bowl in the 90s was already the most watched event of the year but it was becoming a thing for non-sports fans to look forward to. In the 90s, halftime shows were getting more and more elaborate and advertisers were focusing more and more on having an ad that got talked about than marketing the product. This episode satirized all that, plus it had John Madden and Pat Summerall, along with Troy Aikman, Dan Marino, and Rosey Grier as guest stars.

“Our first game today, Denver and New England, is too close to call. Oh… but if you’re one of those compulsive types who just has to bet… well, I don’t know… Denver.”

What’s amazing about this episode is the end. After finding out Homer was just bonding with her to win football bets, Lisa gave him her Super Bowl pick but told him it’s based on whether or not she still loved him. If Lisa still loved Homer, Washington would win. If not, Buffalo would win. Despite airing before Super Bowl XXVI, writers correctly predicted a Redskins win and the episode matched reality. For four years, writers would update the teams in the Super Bowl to match who was actually playing and they were correct each time. The Simpsons is known for predicting everything and this was one of their first examples.

“You know, we had a lot of fun tonight. But there’s nothing funny about…vapor lock. It’s the third most common cause of car stallings. So please, take care of your car and get it checked. I’m Joe Namath. Good night.”

Sometimes, The Simpsons have celebrities play themselves and the writers intentionally don’t have them do the things they’re known for. For example, when Rodney Dangerfield played Mr. Burns’ son, he remarked that he got “no regard at all” instead of his legendary “no respect” line. While his sideburns and Super Bowl III win was dealt with in another episode, Namath’s guest starring appearance on the show was to talk about vapor lock than beating the Colts. That, along with an unexpected King of the Hill cameo, brilliant.

“Man, you go through life, you try to be nice to people, you struggle to resist the urge to punch ’em in the face, and for what? For some pimply little puke that treats ya like dirt unless you’re on a team. Well, I’m better than dirt. Well, most kinds of dirt. I mean, not that fancy store-bought dirt. That stuff’s loaded with nutrients. I, I can’t compete with that stuff.”

Mr. Burns putting himself on Homer’s bowling team is how I imagine Jerry Jones runs the Cowboys. Maybe Jerry can’t put himself on the 53-man roster but he wants to be a part of everything else on the team, usually to its detriment. And when they win, he wants to take all the credit. So yeah, in a way, Jerry Jones is Mr. Burns. Bart and Lisa’s subplot where they have to wear school uniforms was underrated and apparently Otto was an outstanding bowler able to hit a 7-10 split.

“Fun’s over, fellas! If you’re going to beat up my friend in my bar, there’s a two-drink minimum.”

One could make an argument that it was around this time where Homer started to have every occupation other than working at the nuclear power plant and that made the show worse. But Homer becoming a boxer who was a mix of Rocky and Butterbean fighting the “Heavyweight Champion of the World” was worth it. Moe being Homer’s trainer/manager who was taking a 60 percent cut seemed very much spot on for his character and Michael Buffer did a tremendous job as himself.

“Hey Milhouse, knock him down if he’s in your way! Jimbo, Jimbo, go for the face! Look, Ralph Wiggum lost his shin guard! Hack the bone! Hack the bone!”

This episode really epitomized Bart and Lisa as a brother and sister. Playing pee-wee hockey, Bart was one of the best players on his team and after knocking out Milhouse and causing him to lose a couple teeth, Lisa was discovered to be an awesome goalie and was on Bart’s rival team. The episode culminated in the two siblings going against each other and while they both felt like tearing into each other, they realized that the love and bond between a brother and sister was more important than a children’s hockey game. That didn’t sit well with the adults, who trashed the place, but at least Bart and Lisa learned a valuable lesson.

“I’m afraid all those players have retired and, uh, passed on. In fact, your right fielder has been dead for 130 years.”

An episode that’s on many people’s top 10 overall Simpsons episode lists. The episode itself may have relied mostly on guest stars but when you got nine top MLB players from the time all lending their voices, they’re probably going to be the focus of the episode. This entire episode had to have been a massive undertaking in terms of production as all the guest stars needed to be lined up and writers needed to come up with various ways to keep the pros away from the championship game. But the result was a rewatchable masterpiece that not only has remained funny over 25 years later but has been a positive influence on certain careers that had been tarnished since (looking at you José Canseco and Roger Clemens).