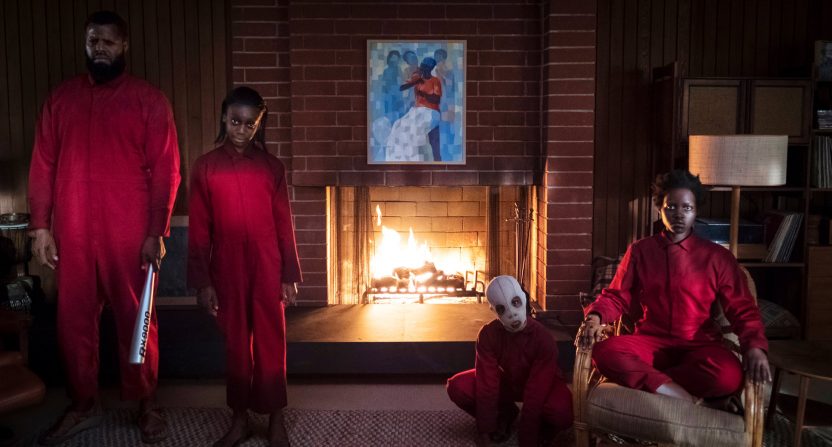 Here’s all you need to know about the best, worst, and WTF movie moments of the year.

10. Ford v Ferrari – How much does ego drive a business strategy? Can bragging rights feel more exhilarating than the bottom line? Ford v Ferrari is based on the true story of The Ford Motor Company taking on Ferrari in the 24 Hours of Le Mans in 1966. While stars (Matt Damon and Christian Bale) have top billing, Tracy Letts steals this highly entertaining movie as Henry Ford II. Letts should receive an Oscars nomination for Best Supporting Actor.

9. Parasite – Director Bong Joon-ho explored class warfare in the ingenious science-fiction thriller Snowpiercer. Parasite covers similar ground, but in today’s world and in a different way. Trouble starts when a poor family cons its way into working for a rich family. The Kims live under one roof, often forced to survive by taking menial jobs. The Parks enjoy affluence. The Kims weasel their way into the Parks’ lives. These two can’t survive in the same ecosystem for long.

8. Honey Boy – Shia LaBeouf is almost as famous for his legal issues and odd behavior as his acting. We might now know why. Honey Boy, written and starring him, is based on LaBeouf’s upbringing as a child actor and his troubled relationship with his father. LaBeouf doesn’t take the easy route of portraying himself but rather an interpretation of his dad, a Vietnam Veteran battling demons. Honey Boy isn’t about the trappings of fame, but rather the long-lasting impact of bad parenting.

7. Leaving Neverland – We’re never going to learn the truth about Michael Jackson. Abuse allegations are often difficult to prove, and the accused has been dead for a decade. But the details unveiled in this riveting HBO documentary are impossible to ignore. Two separate people have frighteningly similar stories. Even in today’s cancel culture there doesn’t seem to be much of movement to remove Jackson from our pop culture. He remains mostly beloved. The power of Jackson’s celebrity changed the lives of his accusers and their families.

6. All Is True – It’s hard to be a legend. All Is True is a reimagining of Shakespeare as the retired patriarch of a dysfunctional family. The Bard (Kenneth Branagh) is still mourning the death of his son while living with two troublesome daughters and an unhappy wife (Judi Dench). Branagh, who also serves as director, creates a moving film filled with humor, sadness, and surprises. It’s slow paced, especially early, but this period piece has a lot of heart and striking emotional moments keyed by Kathryn Wilder who plays daughter Judith.

5. Booksmart – Olivia Wilde’s directorial debut is the top comedy of the year. It’s refreshing to see a pair of breakout performances as Molly (Beanie Feldstein) and Amy (Kaitlyn Dever) try to squeeze maximum fun out of their final day of high school. The comparisons to Superbad are inevitable, especially since Feldstein is Jonah Hill’s younger sister. But Booksmart is more moving and equally funny. It helps that Feldstein and Dever are bolstered by a terrific supporting cast which includes Jason Sudeikis, Lisa Kudrow, and Will Forte.

4. The Nightingale – An incredibly hard movie to watch. The brutality against women and children is so graphic and so horrific. Writer and director Jennifer Kent doesn’t want you to look away. The audience sees all the terrible things that happen to Clare (Aisling Franciosi), an Irish convict living in colonial Tasmania. Her tormentor is British Lieutenant Hawkins (Sam Claflin), the most menacing villain of 2019. This revenge movie shows the impact and costs of what violence does to a person.

3. The Last Black Man in San Francisco – This superbly crafted tale is about the love of a house, gentrification, and the stories we tell ourselves to make sense of an ever-changing world. It’s a love letter to a San Francisco that doesn’t exist anymore. The Bay Area real estate market is one of the most expensive in the country. Jimmie Fails (playing a character with his same name) wants the old San Francisco back as he desperately tries to reclaim the Victorian home his grandfather built.

2. Rust Creek – Rust Creek starts out with a wrong turn. Yes, that’s still possible even with navigation technology. When college track athlete Sawyer (Hermione Corfield) get lost in the middle of Kentucky, she finds herself having to match wits with a small meth gang. She’s fast, smart, and resourceful. This story feels believable thanks to believable characters who are desperately attracted to money. Who knew their biggest obstacle would be a 20-something who was simply on her way to a job interview?

1. Us – Jordan Peele is not a one-hit wonder. With the critical and financial success of Get Out (2017) and Us, he’s probably the most powerful African American filmmaker. Peele has made poignant social commentary cleverly disguised as horror films. In Us, he examines the fate of circumstances and how there are two Americas: The Haves and The Have Nots. We could easily fall into one of those Americas. There are people out there like us, but for one reason or another are living a different life. Hence Peele’s use of doppelgangers. The most chilling moment occurs when Adelaide’s twin Red (both played by Lupita Nyong’o) says “We’re Americans.”

Mining your own childhood pain for art seems gut-wrenching. It’s one thing for Shia LaBeouf to pen a screenplay based on his upbringing. It’s something completely different to portray an abusive, alcoholic father.

She earned an Academy Award for supporting actress for 12 Years a Slave (2013). Only five women have won an Oscar for both supporting and lead roles. Nyong’o is worthy, pulling off dual roles.

Best Supporting Actor: Brad Pitt, Once Upon a Time in Hollywood

This might be the best chance at an acting Oscar for the three-time nominee. He owns one as a co-producer for 12 Years a Slave. Pitt is perfect as an easygoing stuntman.

Annette Bening is great at showing the nuances of longtime politician Senator Dianne Feinstein. She wants the truth revealed but realizes the delicate steps one must take in Washington, D.C.

Hard to believe this is his debut. A beautiful-looking movie with a sad story of lost souls.

Best, worst, most, and WTF moments

Even by Impossible White Man standards, this stretches the limits of credulity. Wick uses a library book to kill a 7-foot-4, 291-pound assassin (portrayed by NBA player Boban Marjanovic).

Most ridiculous opening scene: The car chase in 6 Underground

Sex therapist and nonagenarian Ruth Westheimer asked her virtual assist: “Alexa, am I going to get a boyfriend?”

When Westheimer doesn’t get an answer, she says: “I don’t know either. Unplug her. If she doesn’t know that, what good is she?”

After the premiere of Avengers: Endgame, the NFL running back revealed a key spoiler on social media.

Joker was good, but You Were Never Really Here (2018) was better.

Movie most likely to put you to sleep: Peterloo

For the first two hours and 15 minutes, the most interesting scene involves a thrown potato. Nothing happens until the final 15 minutes. By that time, you’re already in a coma.

Does Adam Sandler make movies just so he can travel on an expense account and hang with his friends?

Worst movie with the most potential: I Trapped the Devil

Great premise (Satan stuck in the basement!), but it needed a better script.

Movie weapon of the year: The flamethrower

Leonardo DiCaprio’s Rick Dalton used a World War II weapon in Once Upon a Time in Hollywood. If you prefer something modern, check out this fancier version in Fast & Furious Presents: Hobbs & Shaw.

Fake movie weapon of the year: The paintball gun

If you’re a 12-year-old needing to escape from a fraternity house, what do you do? Max (Jacob Tremblay) in Good Boys shoots college kids.

If you’re a scorned woman, you can do what Julianne Moore (Gloria) did in Gloria Bell: shoot him outside his home in front of his daughters.

Shaw (Jason Statham) creates a new identity for Hobbs (Dwayne Johnson) to get him past airport security. But, of course, there’s a catch. Hobbs new name is Mike Oxmall. Pronounce it slowly to get the joke. Or just watch the clip below.

A nice tip of the hat to Fox whose Back To The Future films set the gold standard for movie time travel.

Most unexpected cameos: Jake “The Snake” Roberts and Mick Foley in The Peanut Butter Falcon

The Peanut Butter Falcon is a delightful film about a person with Down syndrome pursuing a dream. What makes it even more enjoyable: the surprise appearance of old-school wrestlers.

Funniest cameo: Keanu Reeves in Always Be My Maybe

Credit Reeves for playing a jerk version of himself. Who doesn’t love it when Marcus (Randall Park) punches Reeves in the face?

The second attempt at telling The Dark Phoenix Saga is lousier than X-Men: The Last Stand (2006).

Best canine acting: Sayuri the pit bull in Once Upon a Time In Hollywood

Best punchline: “Was that Cardi B?” from Booksmart

Second-best punchline: “Calm the Smurf down!” in Long Shot

Fred Flarsky (Seth Rogen) gets called out for looking absurd in a blue Swedish costume.

PSA: I will not calm the smurf down because @LongShotMovie is 🔥🔥 & everyone needs to watch it! @MsJuneDiane @Sethrogen @CharlizeAfrica pic.twitter.com/ezwNlRh1lU

Worst decision by a director: Martin Scorsese’s odd casting in The Irishman

We’ve never seen this much bodily fluids in a “regular” movie. #OMG.

Most WTF character: Charlotte in The Perfection

You should have learned the following from Get Out. But in case you haven’t: WARNING: if you’re an African American and Allison Williams takes an interest in you, RUN!

A Fight Club ending for a holiday romantic comedy? Laughable.