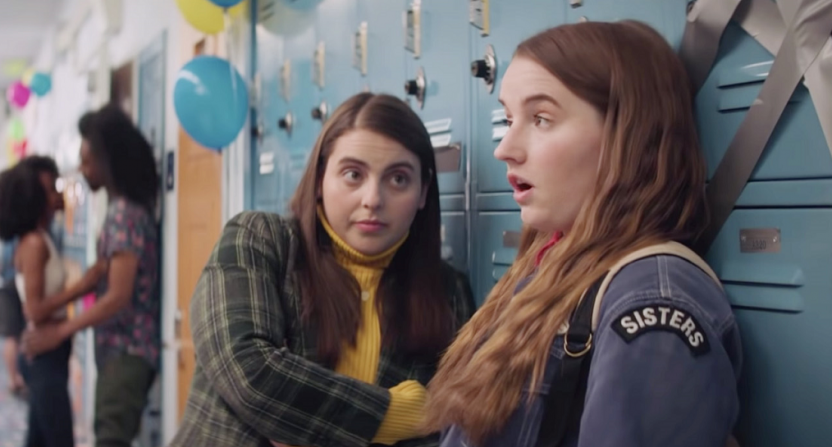 At first glance, it’s easy to describe Booksmart as the female equivalent of Superbad. There are many parallels. Both take place on the final day of high school. Both have a contrasting pair of best friends (one extrovert, one introvert). Both feature misadventures on the way to a house party. Heck, one of the stars of Booksmart is Jonah Hill’s sister (Beanie Feldstein).

While Booksmart might be Superbad’s younger sibling, it’s not a carbon copy. Instead, Olivia Wilde’s directorial debut is a hilarious, nuanced look at female friendships, female sexuality, and the pressures of being overachievers. Booksmart can stand on its own merits. Thanks to great comic acting, a terrific supporting cast, and a whip-smart screenplay, this is the best high school comedy since Easy A (2010) and possibly as good as Superbad (2007).

Superbad didn’t invent the high school comedy. It just took it in a fresh direction. Booksmart seems like a natural evolution, existing in a more diverse universe. Molly (Feldstein) and Amy (Kaitlyn Dever) are not the protagonists we typically see in mainstream movies. Molly is not thin. Amy is not straight. They are wicked smart, bound for Ivy League universities. They have fake IDs – not to buy liquor or get into bars – but so they can get into college libraries. Go ahead. Ask them about their feminist agenda. Molly aspires to be the youngest Supreme Court Justice. Amy is spending her summer helping women in Botswana make tampons.

These brainiacs didn’t take shortcuts. They focused on academics. But now with high school coming to an end, they regret not socializing more.

How do you remedy that?  Well, it’s a teen movie. Of course, you crash the biggest graduation soirée. Show the cool kids that you’re cool too. And just maybe, perhaps, hook up. Raging hormones! Awkwardness! A serpentine quest to find the party! Sound familiar?

While the classic blueprint is there, Booksmart distinguishes itself with its depth of characters and surprises. Molly is a force of nature who is cheerful, unafraid, and resourceful. She’s quick to confront those who make fun of her. Amy is more reserved and doesn’t particularly care what her fellow teens think of her. That’s possibly because she is still working through her own identity issues. She’s gay but inexperienced.

The yin and yang of this buddy comedy is what makes Booksmart work. It’s delightful and sweet how committed they are to each other. Their bond is so tight that Amy’s parents think they’re a couple. That brings us to the supporting cast of adults. The most prominent roles are played by Jason Sudeikis (the principal), Lisa Kudrow (Amy’s mother), and Will Forte (Amy’s dad). Wilde avoids the shortcomings of Blockers, last year’ raunchy teenage girl comedy, which sabotaged itself by making the parents unfunny and uninteresting.

Sudeikis, who’s also Wilde’s husband, is a scene stealer as the principal who just wants to wrap up the academic year and move on to summer. He has some of the film’s best lines including a killer Cardi B joke. Kudrow and Forte portray supportive parents who are still grappling with their daughter’s emerging sexuality. They also think Molly and Amy are girlfriend and girlfriend. Before the teens head out for the night, they trick Amy’s parents into believing that they’re just going to spend a quiet evening together. Amy says: “We’ll probably just do a Korean face mask.” Amy’s mom, immediately assuming it’s a sexual euphemism, blurts out: “I don’t need to know all the words.”

The cast is also highlighted by the wealthy brother and sister pair of Gigi (Billie Lourd) and Jared (Skyler Gisondo). Gigi is flat-out bonkers. Jared is flat-out bro. Gigi seems like she’s a minute away from a 2007 Britney Spears breakdown. Jared drives a pimped out ride and yet listens to audiobooks in his car.

But this movie is the Molly and Amy show. According to Wilde, the two lead actresses roomed together before and during filming to help build a rapport. Even if you don’t immediately recognize their names, their faces should seem familiar.

Feldstein played Saoirse Ronan’s bestie in Lady Bird (2017), and Dever portrayed Timothée Chalamet’s girlfriend in Beautiful Boy (2018). It’s not easy to microwave chemistry, but it’s obvious from the start that they’ve built a connection. Molly and Amy’s bond must be believable for the movie to work. And it’s not just about the jokes. It’s also about the scenes when they don’t get along. One moment is a fight, a super serious turn of events that rings true. It’s raw emotion and the kind of argument only people who care about each other can have.

What separates Booksmart from other teen comedies is while it follows a familiar path, there are enough detours to keep the audience engaged. Three of the best scenes take place inside cars and all three have unexpected twists – including one key interaction that (later) gets them out of a jam.

Booksmart might do for Feldstein and Dever what Easy A did for Emma Stone – establish them as stars. It could also (hopefully) open the door for more directing opportunities for Wilde. This is important. Of the top-250 films of 2018 at the domestic box office, only eight percent were directed by women. (Wilde got an assist to get this film made, thanks to executive producers Will Ferrell and Adam McKay).

Wilde said she was inspired by Clueless and Dazed and Confused, and you can feel the spirit of both throughout this film. The screenplay was written by four women: Emily Halpern, Sarah Haskins, Susanna Fogel, and Katie Silberman. There are so many wonderful lines. It’ll be fun to see which ones become the most quotable.

Booksmart is a love letter to smart people everywhere. It premieres in theaters Friday, but you can watch the first six minutes for free on YouTube.