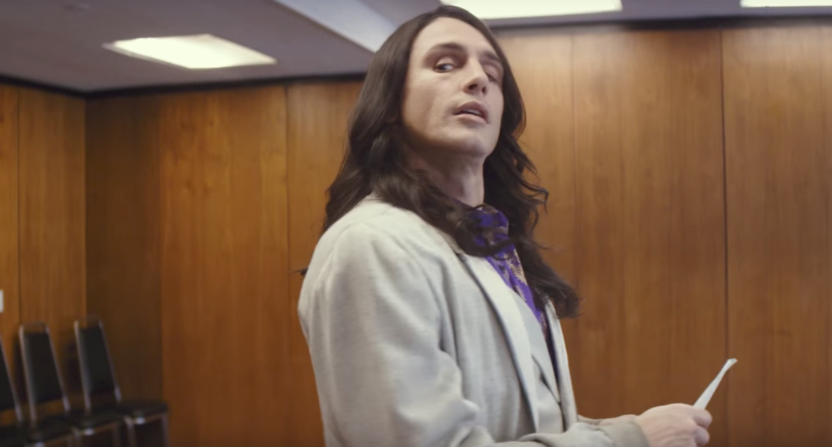 No superhero blockbuster previews this week, though we did get a new Star Wars: The Last Jedi teaser with some new footage. (The Russo brothers posted a hilarious response to those who were asking for an Avengers: Infinity War trailer, though we’ll surely get that before the end of the year.) And we got our first full look at The Disaster Artist and the apparent final performance of Daniel Day-Lewis’s career.

Is there any more anticipated film among critics and pop culture followers than The Disaster Artist, the story behind one of the most terrible movies ever made? The Room isn’t currently available on popular streaming outlets, but there is still opportunity to find the movie on DVD and many proactive theater owners throughout the country are showing the film.

Yet the teaser and full trailers also promote an intriguing comedy about an odd, self-delusional personality who may not have been able to exist in any place but Hollywood. James Franco may be playing another weirdo, this one with a bizarre accent, but Tommy Wiseau is a real person. This stuff really happened! This may be the winter’s must-see film.

This year hasn’t been a good one for Matt Damon with critical and box office flops The Great Wall and Suburbicon. (Though he does have a wonderful cameo in a movie currently in theaters that probably shouldn’t be spoiled for at least another week.) Could he salvage 2017 with the unexpected foray by director Alexander Payne into science fiction?

Following up on the first trailer released in September, the new trailer for Downsizing includes a story point that appears to be a significant spoiler. Maybe it isn’t, which will become clear when the movie is released around Christmas. But if the spoiler goes against a previous expectation or ruins something that would’ve been a surprise in the movie, should it be in a trailer?

We’re still nearly two months away from Star Wars: The Last Jedi hits theaters on Dec. 15. So there is plenty of time for Disney and Lucasfilm to release more promotional material, even if the “final trailer” was released a month ago. At this point, however, some fans may prefer to stay away and have less given away from the movie.

For instance, the big reveal — which is perhaps overstating the case — of this new teaser is Luke Skywaker entering the Millennium Falcon cockpit for the first time in presumably 15 years (by the storyline of the films). Maybe that’s not really a big deal since Rey arrived on the Falcon when she found Luke on the distant planet where he was hiding. It seems natural he’d go check the ol’ ship out.

The other takeaway from this teaser is Rey’s anger. Training with Luke and tapping into the Force may be unleashing some pent-up emotions that she’s been repressing since being abandoned by her parents on Jakku. Or maybe there are some memories going even farther back that haven’t yet been revealed. Are they at all related to a possible connection to Luke or Kylo Ren?

Following up on the teaser released in October, the first full trailer for I, Tonya provides a longer look at what appears to be an outrageous dark comedy that thankfully strays from the standard biopic formula.

The flashback scenes with a young Harding (McKenna Grace, Gifted) and her mother, LaVona Golden (Allison Janney), look entertaining. But everything that happens with the adult Harding (Margot Robbie), especially in meeting Jeff Gillooly (Sebastian Stan), escalates the outrageous tone of the film. There’s plenty of comedy to be mined from Harding not fitting in with the figure skating world, and the choice to have Harding talk directly to the camera at times is intriguing.

Watching Jeremy Clarkson, Richard Hammond and James May drive cars around the world has always made for good TV. And it’s great to see the former Top Gear trio get another season of The Grand Tour, with all the spectacular cars and gorgeous scenery that comes with it, on Amazon Prime.

The first trailer for Season 2 begins with a harrowing sequence in which the three drive cars down a ski slope in the Swiss Alps. That doesn’t look like a particularly smart decision, but we can probably assume they survived. Not sure about the cars, though. The subsequent use of “Live and Let Die” by Paul McCartney and Wings on the soundtrack gives the whole thing a James Bond feel. Bond only wishes he could be these guys.

Following the success of Star Trek: Discovery for CBS All Access, the network’s streaming-only service is adding to its original content. But drawing in a devoted geek audience like the Star Trek fanbase is one thing. Will fans sign up for subscriptions to watch a cop comedy produced by Funny Or Die that looks like it might have played on TBS at one point? Maybe the attraction for No Activity will be the use of profanity, as seen in this redband trailer.

There is some comedic talent worth watching, like Amy Sedaris, Jason Mantzoukas, Jake Johnson, Michaela Watkins and Jesse Plemons. We can assume Will Ferrell and J.K. Simmons aren’t going to be in that many episodes, right?

What is more of an event, the latest film from Paul Thomas Anderson or a new performance from Daniel Day-Lewis that is almost certain to be Academy Award-worthy? Lewis also insists that this will be his final performance, as he plans to retire from acting.

The two first collaborated 10 years ago for There Will Be Blood, which earned Day-Lewis an Oscar, the film a Best Picture nomination, and screenwriting and directing nods for Anderson. Will there be magic again with Phantom Thread, in which Day-Lewis plays a fashion designer in 1950s London who makes dresses for the Royal Family, film stars and socialites, but has his life disrupted by a woman who becomes his muse and lover?

No, this movie won’t be for everyone. But Anderson and Day-Lewis are critical darlings, and anything from them is a must-see for film fans.

Netflix’s Bright looks like one of those films that can’t be described in one sentence. Maybe that won’t matter with Will Smith starring in the movie, David Ayer directing and the movie showing exclusively on Netflix. Imagine if this was a theatrical release. It’s a cop movie with orcs, elves and a magic wand! That might be a tougher sell. But it could also be unlike anything ever seen, judging by this new trailer.

Hopefully, all the jokes aren’t already used in this preview. But Ayer doesn’t seem like the kind of director who could give this movie the humor it needs, like a J.J. Abrams, Jon Favreau or even Robert Rodriguez.

We’re not supposed to like our parents when we’re teenagers, right? They’re lame adults with boring interests or oppressive authority figures who take the fun out of everything. But what if Mom and Dad are supervillains and meet with other sinister parents who form a group called “The Pride”?

After discovering the truth about their parents, these teens manifest inherited superhuman (or otherworldly) abilities while also finding weapons and devices that could cause mass destruction. Runaways may have the tone that some may have expected for next spring’s The New Mutants, but superhero fans are fortunate to have both properties attempting to tell two different kinds of stories. This looks like it could be a fun take on comic book superhero tropes.