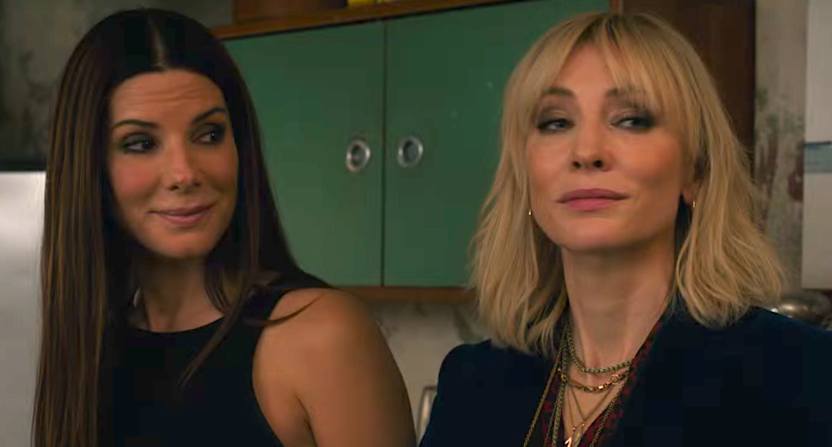 Trailers! We love ’em here at The Comeback. Sometimes, they’re better than the movies or TV shows they’re intended to promote. But they can be an art form all by themselves.

We try to cover the best of them, big and small, during any given week. But we can’t always get to all of them, especially if a big release overshadows everything else, among the week’s sports and culture news.

This week, the all-female version of Ocean’s Eleven makes its trailer debut, we get two different sides of the war on drugs, and an important institution in the history of comedy is made into its own movie. Here are the best movie and TV trailers from the past seven days:

Generating the most buzz this week was a first look at Ocean’s 8, the sequel-reboot-whatever to the Ocean’s Eleven series featuring an all-female cast.

Apparently, thievery runs in the family with Sandra Bullock playing the sister of Daniel Ocean. Like her brother, Debbie Ocean has friends and associates to make up a crew to pull off a big job. Cate Blanchett (who was already having a great year playing Hela in Thor: Ragnarok) is apparently in the Brad Pitt/ Rusty Ryan role as Debbie’s longtime friend and partner in crime.

As with Ocean’s Eleven, the fun comes from two narratives: finding old associates (including Rihanna, Mindy Kaling, Sarah Paulson and Helena Bonham Carter) and bringing the gang back together, and then the heist job itself. And casting Anne Hathaway as the mark seems particularly clever, considering how polarizing she is in pop culture.

This trailer has the same feel as the previous Ocean’s movies, which maybe shouldn’t be a surprise since Steven Soderbergh is still involved as a producer. He and director Gary Ross are buddies (Soderbergh filmed second unit on the first Hunger Games movie), and Ross has made some very good films (Pleasantville, Seabiscuit) of his own. While this looks like he’ll capture the same style, he won’t just be a Soderbergh clone behind the camera.

I didn’t like Sicario as much as many others did, feeling the story lost its way while deciding Benicio Del Toro’s character was more interesting than Emily Blunt’s. Apparently, writer Taylor Sheridan decided to cut the crap for a sequel, focusing on Del Toro’s Alejandro Gillick and his quest for vengeance against the drug cartels that killed his wife and daughter. Josh Brolin is also back as special agent Matt Graver, who made chewing gum look surprisingly cool and macho.

The big difference with Soldado is that Denis Villeneuve isn’t directing this time, and he was a big reason why Sicario was viewed as favorably as it was. The movie looked great and aspired to be something more than a crime drama. Stefano Sollima is behind the camera this time and has shown he can make a gritty crime drama — notably with the TV series Gomorrah.

Based on the trailer — “no rules this time” — this looks like a full-on revenge movie with Del Toro channeling Charles Bronson. (That shot of him pumping a drug lord full of bullets is powerful.) Winning the war on drugs or wiping out the cartels requires getting dirty.

A black comedy about the pharmaceutical industry, Gringo might present the other side of the war on drugs. Maybe “Sicario 3” will send Benicio Del Toro and Josh Brolin after Big Pharma.

In the meantime, we have Charlize Theron and Joel Edgerton as drug executives trying to launch a marijuana pill into production. But they need help from a colleague (played by David Oyelowo) who’s fallen on hard times and willing to get the formula to Mexico, where the new product will be illegally produced.

Theron appears to be at her ball-busting best, but we’ve never seen Oyelowo do comedy and he looks like he’s having a great time here. Sharlto Copley should add just the right amount of crazy (which he usually does) as the mercenary hired to get Oyelowo out of Mexico. We only have a trailer to go on, but Gringo looks like a hell of a lot of fun.

A Futile and Stupid Gesture – Jan. 26

National Lampoon magazine arguably changed the comedy landscape when it debuted in the 1970s, eventually expanding its brand to radio, books and movies. The history of that legendary publication, spawned from the Harvard Lampoon, sure seems like fodder for a good story and Netflix is hoping you’ll agree by watching A Futile and Stupid Gesture.

Will Forte plays Doug Kenney (Martin Mull plays the older version of Kenney, looking back on past events, documentary-style), who started what became a national comedy sensation with its provocative cover images and satiric stories that pissed corporate, moral and religious establishments off with equal opportunity.

What could be especially appealing to comedy fans is re-enacting the creation of comedy institutions like Saturday Night Live (Joel McHale as Chevy Chase!), Animal House and Caddyshack. Getting those wrong could backfire terribly, but director David Wain (Wet Hot American Summer) is probably the right guy to portray these beloved TV shows and movies appropriately.

The Nutcracker and the Four Realms – Nov. 2

The Nutcracker and the Four Realms won’t hit theaters for nearly a year, coming out before next holiday season. But that should give us all plenty of time to argue that if we have to watch a production of The Nutcracker, this looks much more fun than whatever stage production might be happening in your community. (Unless your kids are involved in that stage show, in which case it will be very special and you should be proud. Take lots of pictures and video.)

But come on, this movie has Morgan Freeman wearing a big wig and eyepatch.

A movie about the infamous Chappaquiddick incident, in which Senator Ted Kennedy was involved in an auto accident that resulted in the death of a young woman, comes at an interesting time in our current political climate. Politicians are mistrusted more than ever, due in large part to a media (also viewed skeptically) that is ready to investigate when scandal looms. How much differently would this entire circumstance have gone for Kennedy in this era of 24/7 news coverage, cable news punditry and social media onslaught?

Jason Clarke (Dawn of the Planet of the Apes) is one of those actors that Hollywood has tried to push as a star in recent years, but audiences haven’t been convinced. Maybe he hasn’t found the right role yet (and has chosen some stinkers like Terminator: Genisys), but maybe playing Ted Kennedy is the meatier dramatic role which changes his career.

“Here We Go Again” could have a different meaning for many moviegoers wondering if anyone was asking for a sequel to 2008’s Mamma Mia. But Mamma Mia 2 is going the prequel route, telling the backstory of Meryl Streep’s Donna Sheridan (who has apparently passed away) and her journey to Greece that resulted in meeting the three men who may have eventually been the father of her daughter.

Lily James (Baby Driver) plays the younger Donna alongside a cast of youthful actors portraying the younger versions of Colin Firth, Pierce Brosnan and Stellan Skarsgard. Hopefully, the younger cast can sing better than their older counterparts. Especially in Brosnan’s case. That was a brave choice for him, one which is unfortunately recorded for posterity.

Ultimately, it’s about that Abba music, right? If you like those songs — and it’s OK to admit you do — you’ll probably like this.

This could be the strangest trailer of the week, if for no other reason than a premise which sounds almost too bizarre to believe. Based on a series of young adult novels, Mortal Engines takes place in a post-apocalyptic future in which the city of London travels the world to consume smaller cities and communities for resources that were lost or became in short supply after a great war and the natural disasters that followed.

Mortal Engines won’t be released in theaters for another year, so there probably isn’t much more footage ready than what’s in this teaser trailer. Peter Jackson’s name on it (he wrote and produced this film will surely attract a lot of fans from his Lord of the Rings and Hobbit work, and he’s shepherded other sci-fi projects before, such as District 9.

What we see gives off a Mad Max vibe, though the scope (especially from a CGI standpoint) is much larger (though not necessarily grander). And we have a female hero, Hester Shaw (Hera Hilmar), which could tap into a different audience. Her face being covered by a mask certainly adds to the intrigue, along with its what-the-hell-is-this premise.