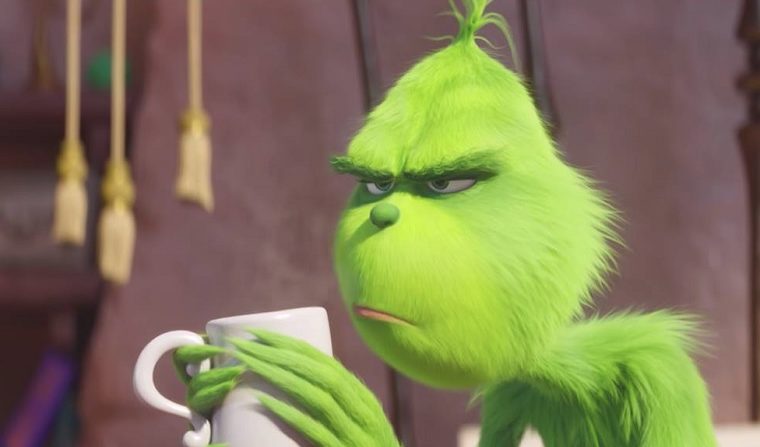 We love trailers here at The Comeback. Sometimes, these previews better than the movies or TV shows they’re promoting. But a good trailer is also a form of entertainment all by itself.

This week brings a much better, longer look at Netflix’s Lost in Space, along with the return of The Grinch, Mary Poppins, Luke Cage and Legion’s David Haller. And a favorite character from our childhood reading may have lost his mind, but in the best way possible.

The teaser released for Netflix’s Lost in Space a couple of weeks ago didn’t reveal too much (as teasers typically don’t), but left one big question to be answered: Where’s the robot? The full trailer answered that question in unexpected fashion. There ain’t no robot!

Instead, Will Robinson (Maxwell Jenkins) discovers and interacts with an alien lifeform. And as we see here, the alien fills the role of Will’s companion and protector (Danger, Will Robinson!). That creates a whole new dynamic of fear and suspicion among the Robinson family, notably Will’s father John (Toby Stephens).

This Lost in Space appears to be influenced by Christopher Nolan’s Interstellar, which is a damn good source to draw from. That may also play a role in the introduction of Dr. Smith (Parker Posey), who is apparently discovered on one of the worlds which the Robinsons visit, rather than part of their original crew. But the big reason for the Interstellar vibe is the production value of the series.  It looks like Netflix sunk some big bucks into locations, set and costume design and special effects to create these different worlds.

Disney owning ABC gives the studio an opportunity to advertise its movies during the Academy Awards telecast, which was exactly the case with this teaser for Mary Poppins Returns. For those who haven’t seen the original Mary Poppins film, Lin-Manuel Miranda and Emily Blunt presumably provide some valuable recognition. But that silhouette of Poppins descending from the sky is likely familiar to nearly everyone. Much of this teaser relies on iconography, such as Poppins’s outfit and the London neighborhood of Cherry Tree Lane.

Blunt has some huge shoes to fill, taking on the role made famous by Julie Andrews. But she certainly looks the part here (as does Miranda in the chimney sweeper/lamplighter outfit worn by Dick Van Dyke). It’s also fun to see Ben Whishaw and Emily Mortimer as the adult Michael and Jane Banks, respectively. Above all, this teaser fuels an urge to watch the original film first.

Just before season two of Marvel’s Jessica Jones premiered, Netflix released a trailer for the second season of Luke Cage. The preview is less than 30 seconds, so there wasn’t a whole lot to show. Most of the teaser consists of Cage (Mike Colter) talking to an opponent ready to challenge him — or to an audience that might need to be reintroduced to him.

We do get some footage from Season 2, notably a scene in which Cage is on fire, but unharmed due to his invulnerable skin. And there’s a funny line at the end with one of Cage’s supporters yelling to him, “Get paid, black man! Get paid!” But we didn’t see Misty Knight with (spoiler alert?) her mechanical arm replacing the arm that was sliced off in The Defenders, nor any of the bad guys Cage will face. Not yet, at least.

An animated reboot of How the Grinch Stole Christmas, rather than a live-action version like the one we got nearly 20 years ago starring Jim Carrey, was probably the best way to go for updating Dr. Seuss’s classic book and character. Thanks to the talented folks at Illumination — who brought us the Despicable Me series and The Secret Life of Pets — we’ll be getting what is hopefully the best version of this story yet (besides the original book, naturally) with Benedict Cumberbatch — whose name sounds like it came from a Seuss book — voicing the title character.

Why is the Grinch so grumpy when he has a dog that serves him French press coffee with steamed milk? Maybe that’s one of the mysteries that this new movie, co-directed by Yarrow Cheney and Scott Mosier (mostly known for producing Kevin Smith films) will answer. I think I’d like to go grocery shopping with that mean guy.

The future of FX’s Fargo may be uncertain, but writer-producer Noah Hawley is still doing great things with Legion. Season 1 of the X-Men tie-in was maybe a bit underrated because it was a mind-trip of a show and didn’t have the action of a series like The Gifted. But Legion is damn good TV and Season 2 should build what the first season established. FX has been dropping teasers for the past few weeks, and finally tied those together with a full trailer release.

Where did David go when he was sucked into that drone at the end of Season 1? How much of Season 2 will be devoted to telling that story? And just what else is in David Haller’s head? While David was gone (dancing?), Ptonomy and Syd (along with burned-face Clark) have been tracking the Shadow King, who’s apparently planning some big and sinister.

Have the two Paddington movies made it all right for animated bears to interact with regular people? Apparently so. It’s OK for Winnie the Pooh to come back! This teaser for Christopher Robin is quite clever, looking like a period British drama about a man whose soul-sucking job is putting a wedge between him and his family. (Lesson here: Never send Hayley Atwell away when you can take a trip with her.)

Maybe this is another Greatest Showman and Ewan McGregor will break into song like Hugh Jackman? No, the man is seeing stuffed animals come to life! Has Christopher Robin lost his mind? Or is this a Hook-like story about a kid living a fairy tale life that came to an end once adulthood arrived? Don’t let that inner child die, people! Or wait until Mary Poppins shows up again.

Since 2009’s Up in the Air, Jason Reitman has fallen off what looked like a really promising path as a director. Young Adult didn’t find a big audience, probably because the lead character was so unlikable. But Reitman has teamed up again with Diablo Cody and Charlize Theron for what should be a much more heartwarming story that could end up being a huge hit with younger mothers, especially those feeling overwhelmed by trying to raise kids, maintain a career and have a life.

Since it’s a Diablo Cody story, hiring a nanny (played by Mackenzie Davis — stay away from The Terminator, Mackenzie!) may go in a direction that we don’t quite expect. The hope is what looks like a potentially heartwarming movie doesn’t go off the rails. Unless this is really a prequel to Mad Max: Fury Road and Theron and Tully run off to join Immortan Joe somewhere in post-apocalyptic Australia.

OK, just announce the premiere date for Cobra Kai, YouTube Red. Or better yet, put the show out there. This third teaser for is fun, and each of them gets a bit funnier. And it’s fun to see Daniel LaRusso in a karate uniform again. (Does his wife make him wear it occasionally to spice things up?) But it is a bit strange to see the dynamic switched around and Daniel making fun of Johnny Lawrence. How many more teasers are we going to get?