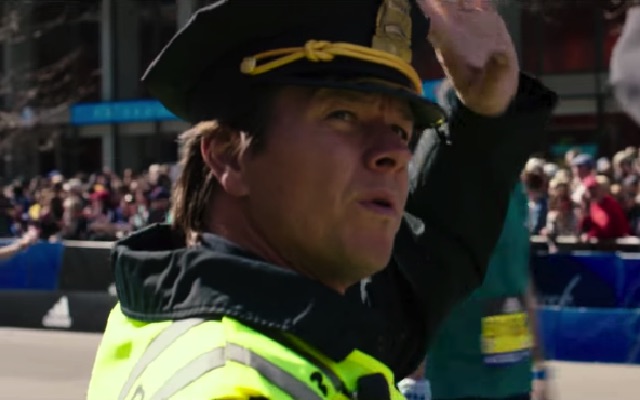 This past weekend, Mark Wahlberg and director Peter Berg finished second at the movie box office with their true-life story about the 2010 oil-rig explosion off the Louisiana coast, Deepwater Horizon. As many of you likely know, the two are teaming up again for another film based on true events: the Boston Marathon bombing drama Patriots Day.

CBS Films and Lionsgate released a teaser trailer for the movie on Wednesday. And this is very much a teaser, mostly establishing Wahlberg’s character, police sergeant Tommy Saunders, and the importance of the holiday in Boston, highlighted by the running of the Boston Marathon. But on April 15, 2013, the marathon was memorable for all the wrong reasons.

Take a look at the trailer:

Wahlberg has enough native cred to pull off that Boston accent, but we’ll see how the other members of the cast handle it. With flashing images, black screens and noise of explosions and crowd terror, turning from a celebration to horror and sadness, the Patriots Day trailer relies mostly on our memories and knowledge of the Boston Marathon bombing.

As you might expect, many people are uncomfortable about giving this incident the Hollywood treatment, especially so soon after actual events took place. The memories and pain are still very recent for those involved. Three people were killed, 264 were injured, many of them seriously. Wahlberg appearing at last year’s marathon to film scenes for the movie didn’t go over that well, with several people expressing their unease.

But Berg has become very good at making films that are respectful tributes to those who were involved in real-life tragedies. His previous two films, Lone Survivor and Deepwater Horizon, took steps to consult many who had direct roles in their true stories, and created heroic, inspirational portrayals of those who saved lives and put others before themselves. (The film will re-enact David Ortiz’s speech at Fenway Park to Boston Red Sox fans, just days after the bombing.)