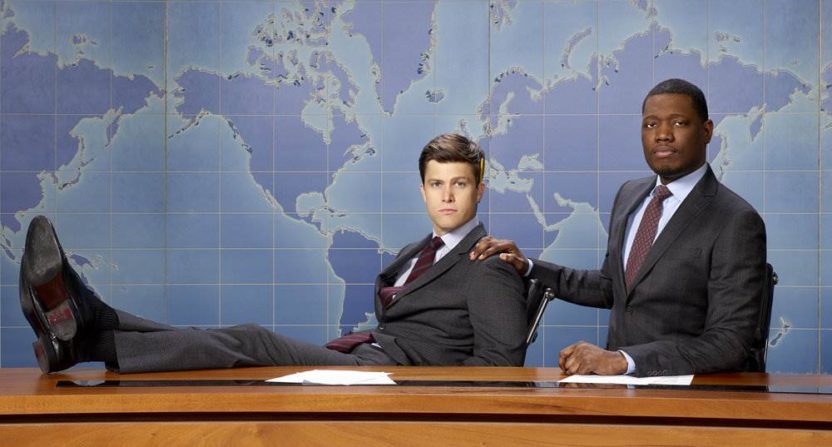 In May, Saturday Night Live finished its most popular and acclaimed season in over two decades with the help of Donald Trump’s unpredictable presidency. Striking while the fire was hot, SNL and NBC announced in March that they would be bringing Weekend Update, and its anchors Colin Jost and Michael Che, to primetime audiences over the summer with the aptly titled Weekend Update Summer Edition.

SNL has attempted the primetime experiment in the past with varying degrees of success, but those special programs aired during the SNL season with two airing in the final month of presidential elections (2008 and 2012). This time around, Weekend Update Summer Edition is its own standalone season, starting roughly a month before the start of Season 43 of SNL, and with no election to buoy its longer-than-normal Update runtime of 30 minutes.

Opting not to air a cold open, WU Summer Edition hit the ground running with jokes about the summer turnover in the Trump White House, North Korea, and immigration. Jost and Che spent extra time on this week’s biggest story, the increasing tension between the U.S. and North Korea, with Jost and Che getting their best knocks on Trump during this longer joke.

After spending the first segment focused on the continuing turmoil in Washington, Jost and Che turned their attention to less terrifying news stories including The Emoji Movie and LL Cool J. All in all, it was pretty standard fare from the anchors who didn’t really knock anything out of the park. But aside from a pretty awful joke about a dead cookbook editor from Jost, they also didn’t bomb.

WU Summer Edition didn’t deviate from the classic Update format at all with jokes from Jost and Che interspersed with visitors to the Update desk. The longer format also added to the guest list with five stopping by, including Donald Jr. and Eric Trump (Mikey Day and Alex Moffat) with Don Jr. discussing “nothing burgers” while Eric played with his fidget spinner, the “eight foot tall” Lavar Ball (Kenan Thompson), and Leslie Jones to talk about spending her summer working out.

The highlight of the night, and sure to be the water cooler topic of Friday, was Anthony Scaramucci (Bill Hader) FaceTiming into the show. Hader now adds his name to the ever-growing list of non-cast members appearing as members of the Trump Administration, and SNL may have decided that with “The Mooch” already gone from Washington, they could offer his spot to someone who doesn’t need to be around the show from week-to-week.

For being the big pop of the night, this segment wasn’t the best of the show (my vote goes to the Trump brothers), but it’s the freshest political story ripe for comedy that doesn’t involve Trump himself. Hader also wasn’t particularly funny while playing up Scaramucci’s goomba persona, so maybe it’s for the best that “The Mooch” only lasted 11 days.

Viewers hoping for a visit by Alec Baldwin’s Trump, or even a single sketch, may have been disappointed to find out they were getting exactly what the title of the show implied. That may not translate into big ratings for Weekend Update Summer Edition, but these four episodes may help Update recover from a bumpy Season 42, and knock off some rust before tackling what is sure to be a highly anticipated Season 43.